Op-Ed: No, 5G is not spreading a virus, but one new 5G implementation could harm GPS— and people rely on GPS far more than they realize.

Note: This post is NOT anti-5G. There is plenty of room for 5G expansion in other spectrum besides that in which GPS resides. The 5G card has been played in this resurrection of previously failed attempts to exploit spectrum adjacent to GPS. The lyrics have changed, but the song remains the same.

The FCC just dropped a spectral stinkbomb on GPS. Surveyors are aware of its value for their work, and the general public knows GPS helps them navigate and get their Uber Eats or Postmates delivered. But most do not know that many aspects of agriculture, engineering and construction, transportation, commerce, and telecommunications is dependent on it. It is not just the positioning and navigation (that you might be familiar with), but the precise time it delivers—cell and computing networks would be near useless without it.

The GPS role as the world’s clock is perhaps one of the least talked about or understood benefits. To do its positioning magic, GPS replies on precise time—so precise that it has to take into account the relativistic effects of time on orbiting satellites. There is a global of array of over 300 atomic clocks that derive precise international time, and that is relayed to GPS satellites, synchronizing their internal atomic clocks, and then broadcast to everything from cell networks, the Internet, computing networks, global financial transactions, and more. Global economies, in many ways, march to the beat of GPS.

So, who would want to mess with that? Follow the money, of course. There are folks who want to mine spectral gold from the same frequency bands as GPS. They have spent a decade, and millions of dollars lobbying for that end. And now, conveniently while everyone is preoccupied with the global health crisis, the five-member FCC board (none of whom are engineers) just gave it a green light.

To understand how we got to this point, we must go back to the 1970s, when GPS was developed and launched. The U.S. military, seeking a way to derive precise positions, anywhere on Earth, in real-time, came up with plan to triangulate (technically “trilaterate and “multi-laterate”) signals from satellites. It was decided to put the GPS signals in what is referred as a “quiet neighborhood” of radio spectrum reserved for satellite communication uses. This section of the “L-Band” is set aside by international agreements for “mobile satellite services” because signals from space, like GPS, are quite weak and there is a buffer to keep stronger signals from interfering. It is like laws preventing your neighbor from setting up stadium speakers to drown out the sound of you practicing the flute in your backyard.

No one really “owns” spectrum, but transmission types and signal strengths are regulated by respective bodies in each country, like the FCC in the United States. Permission is granted to operate in the many spectral neighborhoods, with tight specifications. Firms buy and trade spectrum permissions, and there are occasional frenzied spectrum auctions. Specs can be very tight, but there are ways to seek, and be granted waivers, if one can demonstrate minimal harm to other operators in the same, or adjacent bands.

Turning radio frequency straw into gold was the intention in 2010 when an underperforming satellite communications firm was acquired by an investment group. Permission to operate satellite services in the L-Band, adjacent to GPS came with the acquisition. But most enticing was a provisional waiver from 2004 from the FCC to allow the augmenting of satellite communications with limited ground towers. Game on.

The newly formed Lightsquared sought a broader waiver in 2011 from the FCC to operate a nationwide array of ground towers, and while they had no network of their own, sought briefly to work out a deal with Sprint to piggyback on theirs. The lobbying was intense with big name retired politicians, political consultants, and cable news commentators jumping on board promoting this new network as a panacea for the nation’s rural broadband shortfall.

But, as many industry watchdogs and bloggers noted, the initially planned ground network would not serve even the districts of some of the loudest political boosters. As well, visions of the companion satellite-based system, hailed as a potential boost for rural broadband, did not square with the hard-to-swallow $10,000-per-gigabyte pill the original plan offered.

The plans though did arguably have merit in seeking to help the country move forward toward a goal of adding 500MHz more spectrum for wireless broadband. But the band around GPS would only represent a tiny slice of that goal, and that the FCC at the time was eventually forced into admitting the potential harm to GPS was not worth it.

The 2011 waiver to expand in that band would eventually fall flat. Testing by the Department of Defense, scientific agencies, independent labs, and a cooperative of GPS industry firms showed quite clearly that the proposed transmission levels would interfere with GPS operations and uses.

Lobbying intensified, test methods questioned, quibbling over technical details (mostly by non-technical people), touting of magic filters that would “fix” everything, and an effort to discount the need for GPS—none of this overcame the impact of multiple damning test results. On Valentine’s Day 2012, the FCC issued a statement about the test results that essentially halted the plan—at least in that initial form.

The company then became preoccupied with its financial issues, resignations, and a series of lawsuits. There was a realization, among the backers that perhaps they had acted on faulty technical advice, and more modest approaches have been proposed since. Supporters of the plan touted its importance in addressing a “spectrum crunch”, but that ship had already sailed.

In the decade since, we have seen 4G/LTE spread rapidly across the nation, with 5G hot on its tail globally. And all without the original Lightsquared plan supporters had claimed to be so crucial. No other country (that plan supporters would hold up as examples of the U.S. falling behind in telecommunications) had to consider compromising GPS to meet their broadband goals.

The name changed from Lightsquared to Ligado (perhaps a good move considering the history attached to the original name) but much of the underlying intention to build-out in the L-Band continued. Objections to the plan, chiefly from defense and the GPS industry did not go away; even so, here we are at round two of the saga. They just needed to wait for a different FCC climate.

Despite strong concerns from the National Telecommunications and Information Agency (NTIA) sent to FCC chair Ajit Pai in December of 2019, and chorus of warnings from the Department of Defense and GPS user constituencies, the chairman has indicated his intention to let the plan move forward, and then approval on May 20, 2020.

While Pai has outlined considerable concessions in the new plan, lower power levels for ground stations, and notification requirements before local deployment, the bi-partisan Senate Armed Services Committee has called for a halt to the plan.

Objections include the high costs of replacing or upgrading key GPS equipment to mitigate interference—if even possible— and the pointlessness (as some see it) of the tower installation notification requirement. Say you have GPS deployed for critical structural monitoring, or have fields to work with GPS-based precision agriculture, do you respond to a notice that a tower will be built nearby with a stiff upper lip and break out a tape measure?

I remember hearing a booster of the original plan speak at telecommunications conference, saying that GPS is not so valuable and folks should learn how to use a compass again. Impractical (if not laughable) on so many levels, including the fact that the magnetic pole shift has been accelerating. All kidding aside, there are some sad ironies to this all-but-sealed-deal.

The winners might be some investors, and arguably the plan could help bring 5G about (by a very tiny factor) faster, but the losers could include all of us, directly and by extension.

There are other global navigation satellite systems that collectively along with the U.S. NavStar (GPS) system are known as GNSS (Global Navigation Satellite Systems). A European consortium has the Galileo constellation of navigation satellites, Russia has Glonass, China has Beidou (Compass), Japan and India have regional constellations (India’s may someday go global).

Modern GNSS receivers can use combinations of these, even in commercial products like cell phones. If GPS is suffering from interference, you could always buy products that don’t need to use it, or that make it easy to disable it. The newer constellations are also ahead in modernization, adding additional signals (GPS is only halfway through that process). And while each reserve some services purely for defense purposes, most signal features have been specifically designed for commercial use.

How sad it would be if the country that pioneered global satellite navigation saw its constellation become a second-tier choice? And even more so, if this plan, touted by some as a way to help get “ahead of China in 5G,” sees individuals and industries increase use of the Chinese navigation satellite system?

Did you know that there was already a Space Command long before the new (Starfleet looking) logo and cool uniforms? U.S. military space operations beginning in 1945, the United State Air Force Space Command was formed in 1985 and has just been re-designated as the U.S. Space Force. Among other missions, these dedicated military and civilian folks have been serving warfighters and civilians alike operating GPS since 1978. Now the mission may have to include dealing with a potential Swiss-cheese-like coverage of usable areas on the ground and in the sky. Ironically, this might not due as much to malicious and unintended interference as could be from “blessed” interference-for-profit.

We can all hope for the best, and that the optimistic view of the FCC that everything will be just fine, comes true. There are though, many voices—defense leaders, scientists, and engineers among them—who are calling this a bad idea. Yet politicians and appointees choose to ignore those voices (doesn’t that sound familiar). Do we take the risk of harming something so integral to our lives, economy, and defense for short-term gain?

GPS is an essential amenity, a cornucopia of uses most people don’t realize benefits them. Would any objections at this point be moot? Not necessarily. Objections from the various entities as mentioned remain strong in advance of finalization of the order and implementation of the plan. There could be concerted pressure for more oversight, and legislative action could force a rethink and reevaluation. Many individuals, firms, and professional associations are contacting elected representatives, filing objections directly with the FCC, and working with related industry groups.

While there is some wording in the FCC approval providing an opening for recourse should harmful interference be experienced, the burden falls on the injured to prove this. And despite such wording to try to quell strong opposition to this move, the likely result of this–as with many deregulation moves–is futility and high costs for seeking recourse.

We will all have to live with the lingering effects, directly or indirectly, long after these appointees have moved on to the lobbying careers that await them. 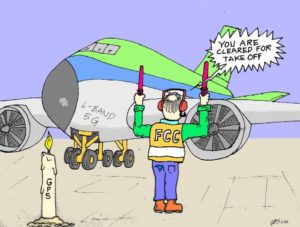 The authors sketch from 2011, during the original Broadband-vs-GPS battle.