In 1990 I had the privilege to work with a group of pioneers in Canada in the early development of land surveying techniques using a revolutionary new technology known as global positioning system or GPS. Back then, there was only a handful of satellites and the availability of a workable constellation that would allow for an acceptable precision, was just a few hours a day or night.

In those days, everything related to GPS was new and our team, headed by Paul Mrstik and James Ferguson, continually came up with ideas on how to improve accuracy and efficiency of the few short hours available for measuring. Adding a radio to a base station and a receiver to a rover gave us differential GPS, or DGPS.

That was a great solution for static points but given the weakness of the constellation, we had to stay put on each marker for a few minutes to obtain an acceptable solution. Then came the challenge of obtaining the same level of accuracy by moving the rover around in what came to be known as kinematic GPS, or as it is called today, real-time kinematic or RTK.

But RTK was not precise enough for some geodesic work, so a new alternative had to be developed and that came in the form of post-processing kinematic or PPK in which you execute the route of the rover in its entirety and then process each point using the base data that corresponds to the time signature.

Given the computing power at the time, this was a cumbersome alternative but with great prospects for the future.

Now, 30 years later, GPS satellites are not alone in space and other countries have created their own constellations, most notable the Russian Federation has launched GLONASS, China produced BeiDou, and the European Union has successfully deployed Galileo. With hundreds of satellites available, it was just a matter of time before the manufacturers of geospatial equipment created multi-channel devices that can receive and process all these different constellations in what became known as the Global Navigation Satellite System or GNSS.

Surveyors and other geospatial professionals have been quick to adopt new technologies that aim at increasing accuracy, improve efficiency, and, if possible, reduce costs to remain competitive. PPK is now more accessible than ever, but there is a drawback—the need for two GNSS receivers, one for roving and one to act as the base station.

Now, a new alternative to make PPK accessible and fast has emerged and it comes in the form of cloud processing and free base data without the need to have two receivers. Rokubun, a Spanish company whose out-of-the-box thinking focuses on accurate and scalable navigation technologies beyond those based on classical GNSS, has launched “JASON” a simple solution to most PPK jobs worldwide by providing base stations and processing services. 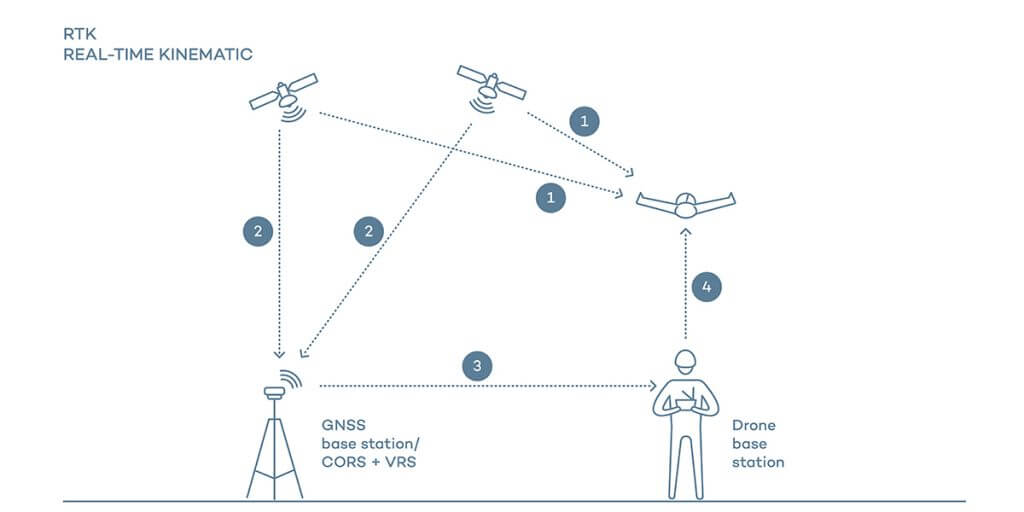 This diagram shows how real-time kinematics works. Post-processing kinematic removes the need for the base station and replaces it with a network of available base points shown in the map below. 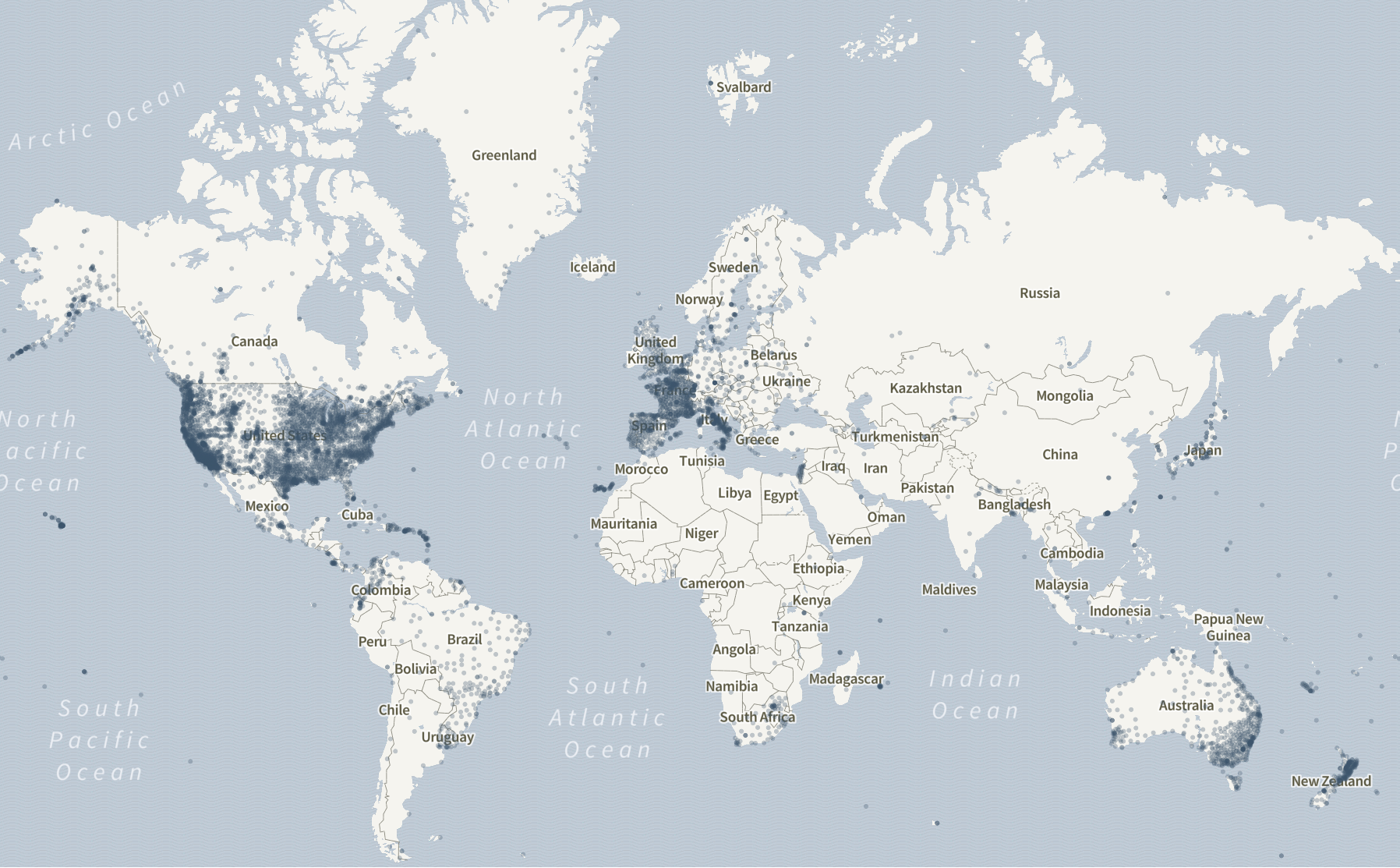 JASON works with rover data in RINEX format (receiver independent exchange format) uploaded to a processing engine in the cloud. The system has access to a network of more than 7,000 accessible base stations throughout the world, which provide stationary data that is processed in conjunction with the customer rover data. The system automatically fetches the nearest one and combines it with the customer data for optimum accuracy.

Given the availability of all this data being generated constantly and available for free, land surveyors now have the possibility of only recording rover data and then using the system to select the nearest station to supply the base data. The service provides land surveyors in North America and Europe with a tremendous advantage in terms of pricing and equipment requirements.

With the increased number of surveying professionals using more affordable ground mobile laser scanners and mapping drones, the need for PPK is growing and a solution that offers just the use of one receiver is welcome.

But how about accuracy? How does the system compare to PPK with your own base, rover, and processing software?

The answer is very similar to conventional methods. If the receiver is dual frequency, a geodetic antenna is used and there is good access to an open sky, the precision is one cm (0.394”) in horizontal and 1.5 cms (0.59”) in vertical plus one part per million (PPM) of the distance to the rover base up to 30 miles.

After that it would be better to switch bases and continue the processing with a shorter rover-base distance. The densification of available base stations should provide, in most cases, acceptable alternatives. In case the operator is located in an area where JASON base stations are not available, the system allows the user to upload base and rover data to be processed, allowing the exact coordinates of the base to be calculated first and the then the mobile points using standard PPK procedures.

Most mobile mapping laser scanners have geodetic antennas, but how about drones?

In the case of small unmanned aerial vehicles (sUAV) that for reasons of weight and size use miniaturized GPS receivers and antennas, the precision is degraded about 20 percent depending on the equipment.

In general terms, the quality of the position depends heavily, as usual, on how good and unrestricted (free from buildings, trees, powerlines, etc.) the visibility is to the satellite constellation. In areas with high-rise buildings or an abundance of high-voltage transmission towers, the precision will be affected by signal bouncing and degradation that are common to all receivers and antennas.

Ionospheric and tropospheric errors are also possible, but these types of external anomalies are common to all GNSS measurements and not exclusive to PPK.

The range of accuracy or precision in any GNSS measurement varies with the ability of the equipment to receive one or multiple channels, the method and time of collecting the data, and the type of processing. The classification goes from the most accurate being a multi (dual) frequency receiver with Precise Point Positioning (PPP) to least accurate being single-frequency equipment with Single Point Positioning (SPP).

At the end of the day, the conclusion is that PPK processing on the cloud without the need to own or rent a base station is a good alternative for geospatial professionals who want to save on equipment or are simply aiming to reduce costs to be more competitive.

Geospatial professionals welcome these innovative approaches that are certainly democratizing our profession beyond the wildest dreams we had in 1990 when a handful of satellites, long sessions, and slow laptops were the norm.