Things in the nation’s capital can happen quickly, but only when the parties involved agree to work closely together towards a common goal.

Internationally renowned artist Jorge Rodriquez-Gerada was given six months to develop a plan and complete a six-acre painting using sand and topsoil. His canvas would be an incredibly high-profile piece of National Park Service land located midway between the Washington Monument and the Lincoln Memorial in Washington, D.C. The finished “facescape” would be visible from the top of the recently opened Washington Monument, from airplanes taking off and landing at nearby Reagan National Airport or via satellite imagery. Tourists walking through the facescape would think they were walking through a Zen garden with no way of telling it represents a person’s face.

Last spring, Rodriquez-Gerada grabbed his camera and went to work. He photographed men walking around the Mall in D.C. with the intent of creating a composite. The resulting two-foot drawing symbolizes the multitude of people from diverse backgrounds who come together to make our nation. The name of his drawing, “Out of Many, One,” or “e pluribus unum,” is taken from the national seal.

Once the portrait was completed, the artist, who was born in Cuba but whose family fled to the U.S. when he was just three, translated it into a digital format incorporating parallel lines.

First, local construction companies stripped the land of the worn-out grass turf and created a blank canvas by spreading 2,000 tons of sand. Next came the hard part: converting the artist’s sketch into a huge “face-scape” viewable from space.

This would require the assistance of a geospatial solutions company. Rodriquez-Gerada turned to Topcon Positioning Group that volunteered their state-of-the-art equipment, know-how, and training.

Each line of the sketch would need to be drawn using high-precision satellite navigation receivers on the ground. 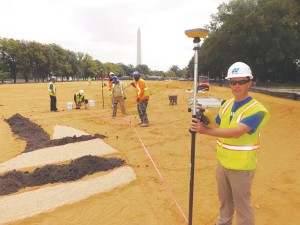 Scott Langbein, Topcon’s director of product marketing, shows how GNSS is used to create the Facescape art installation on the National Mall.

done. We basically redrew the contours of the artist’s conception in the field using stakes guided by our GNSS technology,” Langbein explained.

Laura Wachs, project engineer for mid-Atlantic construction giant Clark Construction and manager for this project, was amazed how rapidly her crew picked up the process. “They really had it in a couple of hours. And the ones who learned the system quickly were able to teach others. We were impressed with how easy the process worked,” she said.

“In a sense it is reverse surveying,” explained Mark Contino, Topcon’s vice president of global marketing. “Surveyors normally measure the real world and scale it down to readable maps. In this case, the project starts in the artist’s mind, and each contour of his drawing is redrawn in the field using stakes guided by Topcon GPS technology and MAGNET Field software.”

In a matter of days volunteers set nearly 10,000 wooden-staked points of reference and tied them with more than eight miles of string line to create an outline of where the topsoil would be placed. “Our rovers were essentially painting the outline of each shaded area,” Contino said.

“Out of Many, One” is the fourth of Rodriquez-Gerada’s terrestrial series. The others were created in Barcelona, Spain; Amsterdam, The Netherlands; and Belfast, Northern Ireland. It was open to the public all of October and then will be reseeded and turned into a high-quality turf field, part of the National Park Services’ plan to completely upgrade the grass on the National Mall.