Imagine walking up to an object with practically any camera and taking photos of it at different angles. Now imagine uploading those images onto a computer and being able to create a survey-accurate point cloud. Sounds impossible, huh? Too good to be true? That’s what I thought when I first heard of Pix4D.

When I first heard about this software, I just had to look into it, and this is what I found out. Pix4D is a software company out of Switzerland (interviewed by xyHt earlier this year at the Esri conference—see YouTube for the interview) employing 34 people. They have just opened two local offices, one in San Francisco and one in Shanghai.

Pix4D Mapper is the software I’m writing about here. This insanely cool program will import images from any camera, along with GPS coordinates and external point clouds. Without much input from the user, it will create a complete 3D model. The model can then be exported as a 2D orthomosaic image, a 3D digital terrain model (DTM), or a 3D point cloud. That’s almost three products in one.

Here’s my take on the product just from talking to Pix4D about it and experimenting myself. (Full hands-on test projects are forthcoming here in print, and Pix3D’s test project is on xyHt.com.)

The hardware needed is easy to get a hold of and relatively cheap. You can buy a UAV online, set the camera to automatically take photos periodically, and fly it over your site. (Make sure you’re allowed to fly in your area first. You can go here— www.map
box.com/drone/no-fly—to see which areas are off limits. Also check with your local laws.) 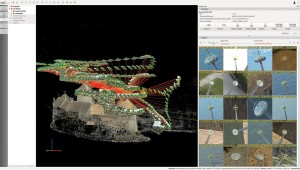 Reconstruction of the 725 aerial oblique and nadir imagery acquired with a custom-made quadro-copter with a GoPro gimble mount (GoPro Hero3+ black edition).

After the flight you will then upload your photos into Pix4D Mapper. That’s pretty much it. The program will stitch the photos together using overlapping common objects in the images. The overall combined image will be produced, and because it was compiled from many smaller images at different angles you’ll be able to create an accurate 3D model of the site.

If you’re able to see objects in the image that you know the coordinates of, you can assign the coordinates to the object, and suddenly the image is georeferenced. Fly your site many times over the course of the project and you will have an ongoing as-built map of the site conditions.

What if you’re unable to get a hold of a UAV or are not able to fly in your area? Grab a digital camera and tripod and take as many photos as you can of the object or area. Make sure to get plenty of overlap between photos. Just like if you’d used a UAV, the program will search for common shapes or objects in each photo, such as the corner of a sign or

the edge of a sidewalk seam. These are the local control points the program uses to tie the pictures together.

You will need to see this application in action to understand its full potential, and that’s why Pix4D ran a sample project. They could have simply taken photos of a boring, downtown building, but instead they decided to create a model of Switzerland’s most visited site: the Chillon Castle. The Chillon Castle is an island castle of 21 interconnected buildings, the result of several centuries of constant building, adaptations, renovations, and restorations, and has been around since roughly 1100 AD.

This is a very complex site that would be a logistical nightmare to map with conventional methods, but Pix4D was able to accomplish it in one single morning! My description of the project with technical details is on xyHt.com.

The ongoing advances in software never cease to amaze me. Who would have thought that so much was possible from just a handful of images? Getting the word out there and trying this new technology is going to only benefit our companies and industry in general. This is why I am grateful for companies like Pix4D and their cutting-edge ingenuity. 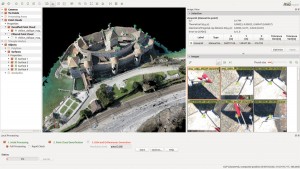 Densified point cloud of final reconstruction in rayCloud editor showing the ground control points and manual tie points used for the merging of the various datasets.

Camera calibration is another interesting aspect of the software. Most programs limit the supported cameras, but Pix4D calibrates the camera

interior parameters from datasets, either from their own or from their clients’. Well-distributed tie points are found and measured on overlapped images and then used to optimize the parameters. Once the parameters are obtained, they’re stored in the Pix4D Mapper camera database.

The method is also known as the self-calibration bundle adjustment. Whenever a new project is created, the software searches for matched models and brings in the camera interior parameters, which are already calibrated, and later on there’s the possibility to re-calibrate them using the current dataset (by options settings). If a project was created with an unknown camera model (maybe it was never used for the datasets before or it was unable to be detected via the EXIF), the user would have to enter those parameters manually, or he/she can send Pix4D the dataset and they calibrate the camera.

What can be done with the final model?