Lonnie Sears co-founded and runs Champion with dedication to training, quality, and cost.

Editor’s note: The theme of this month’s issue is surveying innovation, so we felt it fitting to present the story of Champion Instruments. This firm was started by an American surveyor who responded to what surveyors were asking for and who has found success in providing it: capable GNSS gear at affordable prices.

Lonnie Sears’ passion for surveying began when he took a surveying class while studying engineering at West Virginia Tech. “I am an outdoorsman and didn’t want to sit at a desk my whole life,” he recalls. 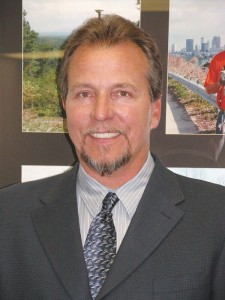 Lonnie Sears co-founded Champion Instruments with the goal of selling a network rover for about $10,000.

After college, he worked as a surveyor at a series of companies, the last moving him to Atlanta for Travis Pruitt & Associates. “Travis and I hit it off real well,” Sears says. “We’re both technology guys. We try to find ways to make technology work for profit, and we’ve been pretty good with it.”

The two bought a Trimble VRS network and used it to cover the Atlanta area, offering it as a subscription service. Sears still runs that network as president of eGPS Solutions. Building on the success of their network, Sears and Pruitt began selling equipment. “We started Champion Instruments because we just could not figure out why GPS equipment costs so much,” Sears says. After all, he points out, GPS receivers don’t have that many components.

They set a goal to sell a network rover for about $10,000 and kept trying different manufacturers until they finally found one that would allow them to meet that goal. Now, they sell the Champion and GeoMax brands and are doing “quite well.”

“Our mantra is that we will not let you fail,” says Sears. He recalls that many people in Georgia were afraid of GPS, particularly when he and Pruitt launched their company in 2004. If they’d already bought a GPS receiver, they kept it in their car because they could not figure out how to use it. And everyone wanted to charge them an arm and a leg for training.

“I showed them that they could pull that stuff out of the car, hook it up to a modem, and get on the network, and that it’s a lot easier than they thought to get on the right datum and know that you’re getting the right answers.”

Sears and Pruitt convinced people to be less afraid of GPS technology. It uses a different math from what surveyors were used to, he acknowledges, and it requires thinking differently about errors and how to manage them because they are expressed in statistical means rather than geometric means. Just by training people, he recalls, they had very good adoption rates and success getting people on the network and actually using their GPS equipment, including using real-time GPS.

Champion still offers many training sessions, and that’s an integral part of its growth strategy.

“Typically,” says Sears, “when we deliver a piece of equipment, we sit there and show you how to configure it, how to get on whatever datum you want to get on, how to upload and download and get all the software loaded and train somebody there. Then, even after the sale, it could be a year or two later, if you need more training, we are going to come by and show you what you want.”

Additionally, Champion offers 24/7/365 phone support. “I have three or four [support] guys that love what we do. I think the secret of our success has been that we stand behind the products and services that we sell and we train and do not charge for the training.”

Champion’s end users run the gamut–including governments, farmers, contractors, and surveyors. “We have the best success in the state because, [before us] they haven’t had proper training and are worried that they will not know how to operate the equipment,” Sears says. That is particularly important in the rural areas, he explains, while in the cities most of the company’s success is due to word of mouth. 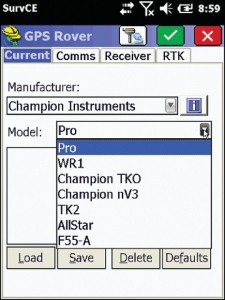 GNSS for surveyors: Champion sells its equipment with Carlson Software’s SurvCE software and is known for its quality training for both.

A nuclear power plant that’s getting ready to put another reactor online needed to build two additional cooling towers. The contractor who won the bid, Sears says, is an intelligent surveyor who has been doing construction for a long time. He bought used slip forms to go up and down the towers, but they were getting wrapped and twisted. He was trying to survey the towers using a conventional method, with a robotic total station, but that was not accurate enough for the manufacturer of the forms, who needed to re-work them entirely. The surveyor called Sears to inquire whether GPS might help.

During construction, the towers always had rebar sticking up at the top, and Sears explained that the rebar would produce a vertical error of a couple of tenths of a foot but that GPS would be sufficiently accurate horizontally.

Another big problem was that work was way behind schedule. “The ironworkers, contractors, and carpenters were chasing the surveyor, and there was a lot of tension on site,”says Sears. The surveyor was pressured to get those forms set faster. So, Sears and his team took a base station and a rover to the site.

Initially, their setup worked on some days but not on others. By using a frequency scanner, however, they were able to determine that the problem was due to other people running base stations in the area on the same frequencies that they had been using. The surveyor requested and obtained his own frequencies from the FCC for the project, and that solved the communications problems.

“From that point on,” Sears recalls, “they were able to get back on schedule, stay way ahead of the carpenters and the steelworkers, and finish that first tower. Then, they repeated the same process on the second tower. The whole process worked very well for them.”

EMC Engineering, with half a dozen offices spread throughout Georgia, works on public and private projects, including transportation, utilities, and land development. The firm wanted to standardize on the same equipment and on the same data collection software. The receivers from other manufacturers they had been buying were getting old. Champion convinced them to adopt one of their receivers and Carlson Software, then trained all of their staff.

Working with EMC required Champion to provide support to each of its offices and each party chief. “Everybody is getting the same information from us,” Sears explains. “They are all talking to the same people, getting the same field procedures, and being able to standardize across their company.”

This allows crews in different cities to help each other out on big projects, because all of their data integrates into the same upload/download scenarios.

“I think that they have been tremendously successful with it. They are continuing to grow.”

Cheyne McLean has been in surveying since 2002, mostly working on topographic surveys, construction staking, surveys for civil engineers, and boundary surveys. He has worked with EMC for eight years and has been the department manager for its Columbus, Georgia office for the past three years. “We run GPS, in some form or fashion, just about every day,” he says.

EMC owns about ten Champion units, two of them in Columbus, all running Carlson software. “We have pretty much standardized on Champion,” says McLean. EMC’s decision to buy Champion receivers was a collective buy-in throughout all of the company’s different offices, he says.

When EMC bought its Champion receivers, a trainer from Champion walked EMC staff through the setup and key features for a couple of hours. “Just getting the details on the Champion receivers was very easy,” he says. When EMC required additional support with static or rapid-static observations or with sub-meter accuracy shots, Champion was able to provide it.

Wright Powers is the survey group leader in the Savannah office of Thomas & Hutton, a multi-discipline engineering company with offices throughout North Carolina, South Carolina, and Georgia. The firm, which provides engineering services including work on water, sewer, transportation, commercial, and industrial projects, has been using Champion for about a year and a half.

“We chose them mainly because their price was competitive,” says Powers, “but I had talked to other people who had used them, and they had had good success with the equipment, so we decided to try it out. WeÕve also bought Geomax equipment from them. We are starting a wave of replacing older equipment.”

The firm uses the Champion receivers, with Carlson SurvCE, for a wide variety of projects, including setting control on large topographic boundary surveys and quantity surveys. It is also subscribed to Sears’ eGPS network. In addition to providing technical support when Hutton first bought its equipment, Champion has continued to provide support.

Cutting out the Middle Men

Champion Instruments recently released a new data collector, the HC1. “We are really proud of it,” says Sears. “It is very inexpensive.” In fact, he claims it’s about $1,000 cheaper than any other device with similar features.

Champion also has a new GNSS receiver that is very small, will capture all the future signals, is web-enabled, and provides a WiFi hot spot.

To achieve its combination of quality and price, Sears explains, Champion shops among many Chinese manufacturing factories and negotiates to get volume deals rather than buy cheap modules. The company, he adds, insists on getting Trimble boards, either Satel or Pacific Crest radio modules, and 3G or better internet modems.

Once Champion receives something from a factory in China, it thoroughly tests it, writes all the documentation, and makes sure that it is all working. It coordinates with the people who write the OBDs at Carlson Software, such as Sarah Winter, who helps it to write the DLLs so that its instruments are fully programmable and fully functional with Carlson software.

“We can do all of that via the internet and via relationships with key people both in China and here in the United States,” Sears says, “without wasting a lot of time and energy. We do it in a way that will maximize and get our unit costs down to where we can sell it at a good price and still make a decent profit.” The secret to Champion’s success, he says, is a combination of innovation and “cutting out a bunch of middle men.”

Sears has no doubt that the next big opportunity for surveyors is UAVs. “You can collect so much more data, so much quicker, with fewer people,” he points out.

Champion is trying to position itself to be the dealer for surveyors who embrace that opportunity and to support them not just with the hardware but also with software packages that use all the images collected by UAVs to produce a map. The company wants to help surveyors navigate that process and be confident in their results.

“Those are the ways that we are going to support surveyors in the future.”

Captions: A surveyor uses a Champion PRO GNSS transceiver, which can be used as a base or a rover.