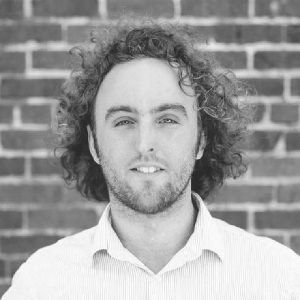 The three co-founders of Swift Navigation—Colin Beighley, Timothy Harris, and Fergus Noble—all are under forty years old and all deserve a place in our Outlook selection. By using the highly scientific method of a series of coin flips, we have chosen to profile Fergus Noble, but actually this entry is a profile of the founding team and the rather amazing thing they have done in the GNSS industry.

Their story is of a group of motivated young entrepreneurs from outside the traditional GNSS development industry who recognized that the kinds of solutions they would like to develop for emerging navigation markets (such as autonomous vehicles) might not be possible under the legacy structure of GNSS boards and positioning engines (mainly because of prohibitive status-quo pricing structures). The trio set out to develop their own GNSS receivers, beginning with crowd-sourced elements, and now they have succeeded with affordable components. This fact and that they have attracted forward-thinking investors is raising a lot of eyebrows in the industry.

Chief technology officer Fergus Noble came to Swift with an eclectic background, including developing technologies for spaceflight, R&D for airborne wind turbines (for which he helped develop a software-defined GNSS receiver), and automotive technologies. He received his master’s in physics from the University of Cambridge and was president of the student-run spaceflight society there, where they built high-altitude balloons and rockets. Noble is still very much a rocket scientist, and you can find him in the lab, doing hands-on development work at Swift Navigation’s HQ in San Francisco.