Above: A view from the OpenCities Planner online 3D city model web portal (hosted by Agency9) for Gothenburg, Sweden. A new skyscraper (now under construction) was added to provide planners and citizens a realistic idea of the visual impact of the proposed development. Credit for all images in this article: Bentley Systems.

Today’s 3D city models are marvels of big geospatial data, but one cloud-data company proves that full value is realized only through broad accessibility.

“Things get done only if the data we gather can inform and inspire those in a position to make [a] difference.” This quote from educator and author Mike Schmoker could easily describe the perennial challenge for big geospatial data: getting that data in front of the decision makers and influencers.

Recent advances in mass-data-capture technologies are providing a flood of 3D spatial data, and in many cases far more than can be effectively digested. At one level, it is easier to create a 3D city than it is to make it broadly accessible to non-expert users: planners, policy-makers, stakeholders, and citizens.

There are many great examples of 3D cities, but many have used custom services and applications. Like the early adopters of large-scale regional aerial planimetry projects in the 1990s and 2000s, many have found themselves locked into proprietary solutions and datasets that are difficult to keep current and adapt for changing needs.

Fortunately, in this era of rapid and affordable 3D remote sensing and modeling, an entire sub-industry of service bureaus, web-delivery application developers, and hosting services has come to meet these needs.

One successful example is Agency9, a provider of city-scale digital twin cloud services for city planning and related web-based 3D visualization. In October of last year, Bentley Systems, a global provider of comprehensive software solutions for advancing infrastructure, announced during its Year in Infrastructure 2018 conference that it acquired Agency9, whose signature cloud service for visualization of 2D and 3D data has become OpenCities Planner.

While not a completely unique service (there are similar cloud-hosting services and applications), Agency9 has demonstrated a high level of adoption and success. This success was a key factor in Bentley’s decision to acquire it. 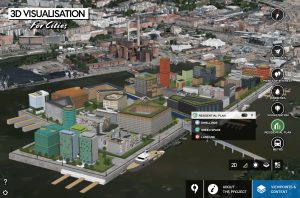 The Agency9 name, said CEO Håkan Engman, “came from the founders, [who were] two students at a Swedish university who developed initial web applications for 3D gaming [visualizations, so] the name sounds like it is for games. We work with many governments [on 3D cities, and so] some people have joked that our name sounds like we are a government agency.”

Agency9 is an example of where the technological advances developed in part for the spatial-data-rich and rapid visualization-intensive gaming platforms—especially massive multi-player online (MMOs) games—have proved to be practical solutions for the AEC industries, BIM processes, GIS, and smart cities.

An early project—and bellwether for the future of Agency9’s cloud-service developments—is a web-delivered 3D visualization of Sweden. Cities and municipalities liked what they saw, and, in keeping with Sweden’s reputation for leadership in geospatial matters, many tapped Agency9 to develop content pipelines for their respective 3D city initiatives.

“For the mid-sized to large-city [segment], we have more than 40% of cities in Sweden, including nine of the ten largest,” said Engman, “with others in Northern Europe and some internationally.”

The key to broad accessibility is in rapid web visualization and navigation—without needing to download any plug-ins or apps.

Engman explained, “We have a basic technology for streaming large terrain models, connecting the data, and providing that to the internet for all of the WebGL-enabled phones, tablets, etc.”

Also, on the client (e.g. city) end, Agency9 has streamlined the intake and linking for 3D and other source data. Engman said, “We have prepared the content pipeline to take in 3D data, reality meshes from ContextCapture and other mesh products, but also DTMs [and more].”

Agency9 emphasizes supporting standard data formats where clients are not locked into proprietary channels. These formats, Engman said, include Open Geospatial Consortium (OGC) standards and common commercial formats. He notes that being part of Bentley provides opportunities to further develop their products. He said that working with Bentley’s development teams for MicroStation and iModels presents intriguing possibilities, such as connecting data from ProjectWise, iModelHub, and AssetWise to the 3D city model digital twin.

For example, a small city might contract an aerial firm to do a city-wide mesh, orthophoto WMS, and/or DTM. The city adds this as a base in their OpenCities Planner project. And, as with any data added, it can be hosted online with Agency9 or linked from the city’s own source. You can also add 3D vector data, like building footprints and/or point-cloud data for building height extrusions. Other examples of city-wide datasets that can be added might be points for trees with attributes for height, diameter, and type.

We do not live in a world of unlimited web bandwidth and speed, so there are practical limits to the density and resolution of the 3D data elements, especially when dealing with an entire city. Agency9 has employed methods to process requests for rapid visualizations and navigation within the models, like holding tiled data in cache to improve performance for subsequent users and uses.

You can sign up on their website for a test account and try out navigation (and canned analysis tools) in a demo project. I did so from halfway around the globe on a tablet connected to a 4G hotspot. The response was quite manageable. I’m looking forward to trying their mobile app to be released soon. You can also view it in high-resolution virtual reality mode (e.g. with Oculus and HTC Vive) or low-res virtual reality mode with Google Cardboard.

Through Agency9’s 3D Data Manager, the client (city officials, a project manager, etc.) can combine the various 3D mapping elements, models, 2D sources (to drape over the models), and databases with attribute data. In practice, this enables data currency as you can easily update/replace data sources.

But it also allows clients to add elements with higher definitions in specific places within the city model—by drag and drop. This could include higher level-of-detail models like IFC standard BIM models. You can add 2D and 3D linework from CAD exports for both above-ground and underground infrastructure. Higher definition data for a particular area of interest or development might be added with ad hoc drone flights, static or mobile scans, surveys, or imaging. You can also connect to external data services like Esri Image Services, DigitalGlobe, and more.

Unlike in the early days of 3D-city-data-related web services, the end user does not need to be an expert user and only needs a web browser and a good internet connection. For instance, a citizen can access the city portal to look at and comment on a proposed new rail station or housing development.

The web navigation controls are intuitive, especially in this age of 3D-game and Google Maps-like interfaces. Cities can add forms for feedback and project collaboration. There are even built-in apps, like sun/shadow reports, elevation heat mapping, and an open API for cities to add their own features and functions. There are also options to select areas for exports in standard formats for downstream uses like engineering design or editing and re-inserting to update the model.

The upshot for surveying, remote sensing, and geospatial professionals is that services like this could mean new opportunities. You might have always served as the creator of source data being added to 3D-site (or city) models with single-format deliverables. But now, with services like those of Agency9, the aggregation of multiple sources becomes a deliverable you can offer—an easily accessible interactive 3D digital twin—all in a cloud platform your clients can provide to their citizens, collaborators, and stakeholders. 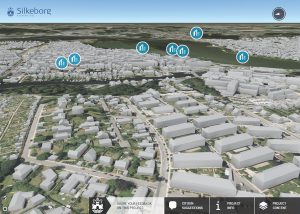 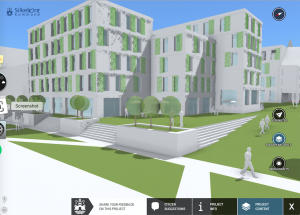 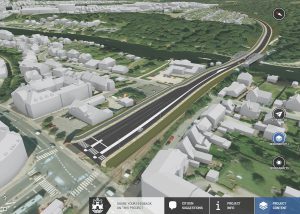 These images from the OpenCities Planner portal for the city of Silkeborg show different levels of detail elements that can be combined in a web-navigable 3D city. From the top: low detail buildings (to enable rapid navigation); a detailed building model (when zoomed in); and a proposed transportation project imported from engineering models.