To prepare you for the this blog post, I wish to point out that I am a geospatial expert and can hold my own around the ins and outs of survey, so going to an event at the Ordnance Survey on “3D mapping for the improvement of GNSS in urban areas” was an eye-opener. You see, I went to the event as it was related to my area of expertise, 3D mapping, but came out seeing how we need more accurate information and better 3D data.

The day was designed to help us better understand how to overcome the issues in dense, built-up areas such as London, where GNSS signals are reflected or frequently fall outside the line of sight.

First up was Frank Van Diggelen who discussed how Google have introduced a new tool called “GNSSLogger” for phone manufacturers, developers and surveyors to check devices and the quality of their measurements, as having an awesome chip doesn’t always mean better GNSS due to all the parts of the whole. 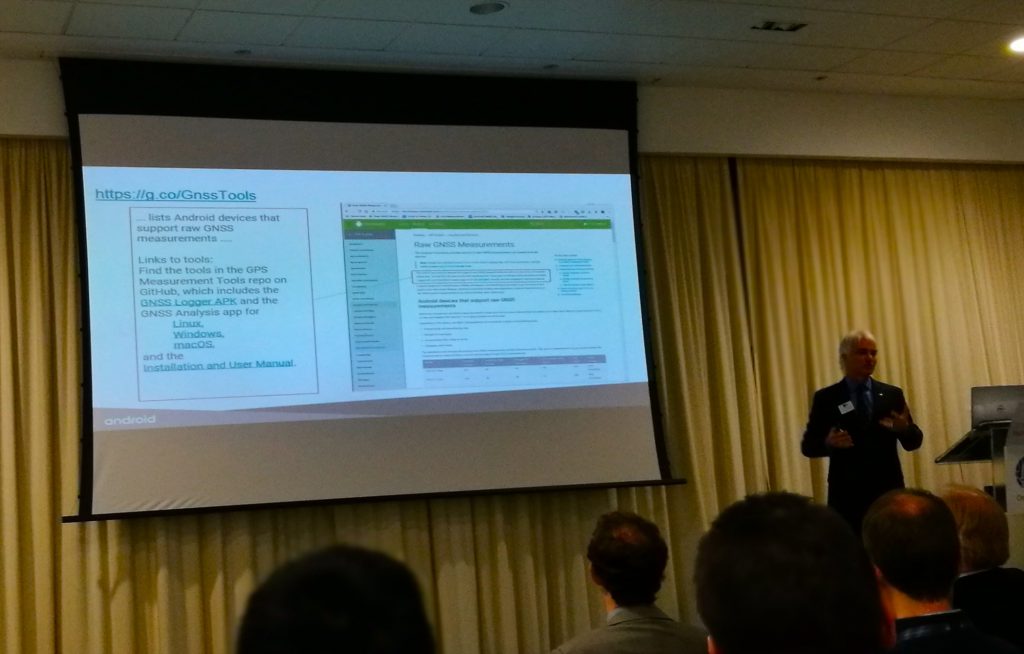 Frank also discussed “HD GNSS”—this was L5/E5, and although current phones use E1/L1, they were preparing. My mind at this point wondered how they are testing this if they don’t have a smartphone to test it on *hint.* The talk also discussed how Android phones use other sensors to improve the location in the “Urban Canyon” (densely built areas where signal cannot get through).

Philip Mattos from uBlox spoke about the new F9 chip that they were working on, a dual frequency chip (L1, L2 + L5) designed for use in autonomous farm equipment and high-grade UAVs. The chip, at present, has proven to have an accuracy of around 10cm, and due to the dual frequency, is less liable to spoofing and jamming. With RTK and high-precision SSR (Space State Recognition) turned on, the accuracy is much higher and can provide survey-type accuracy to autonomous and urban applications. 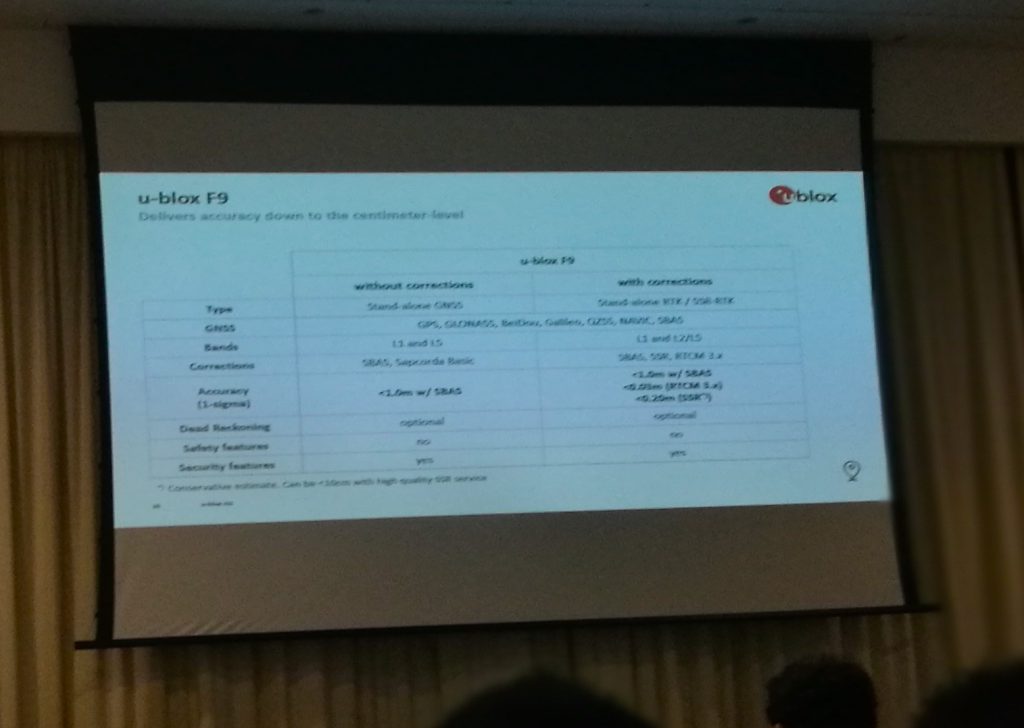 Paul Groves from UCL spoke on how UCL were able to take course 10-20m GNSS positions in dense urban areas, and, by using 3D geospatial mapping data, they were able to correct the data to 3.5-5m RMS (horizontal). With more than 10 research groups and 60 papers on the subject, the project is near completion and covers three methods to improve location. When combined, higher levels of accuracy are achieved.

The three methods used are:

Mounir Adraj, Department of Civil, Environment & Geomatic Engineering at UCL, went on to discuss the results obtained from the testing of the methods outlined by Paul Groves in both their testing at Canary Wharf & City of London (two distinct building density types). It was found overall that using these methods, in urban areas, seven times more accuracy could be obtained than conventional GNSS. Where originally a position of 15m was obtained, this was down to 2-3m. One of my favorite highlights here was the augmentation of barometric heights testing which was done using window cleaning poles (the images were worth the talks alone).

One further talk which was interesting was from Dr Henry Martin from Focal Point Positioning. He described how they could use post-processing (and real-time) algorithms to provide sub-centimeter accuracy. There were two “products” discussed, D-Tail and S-GPS. 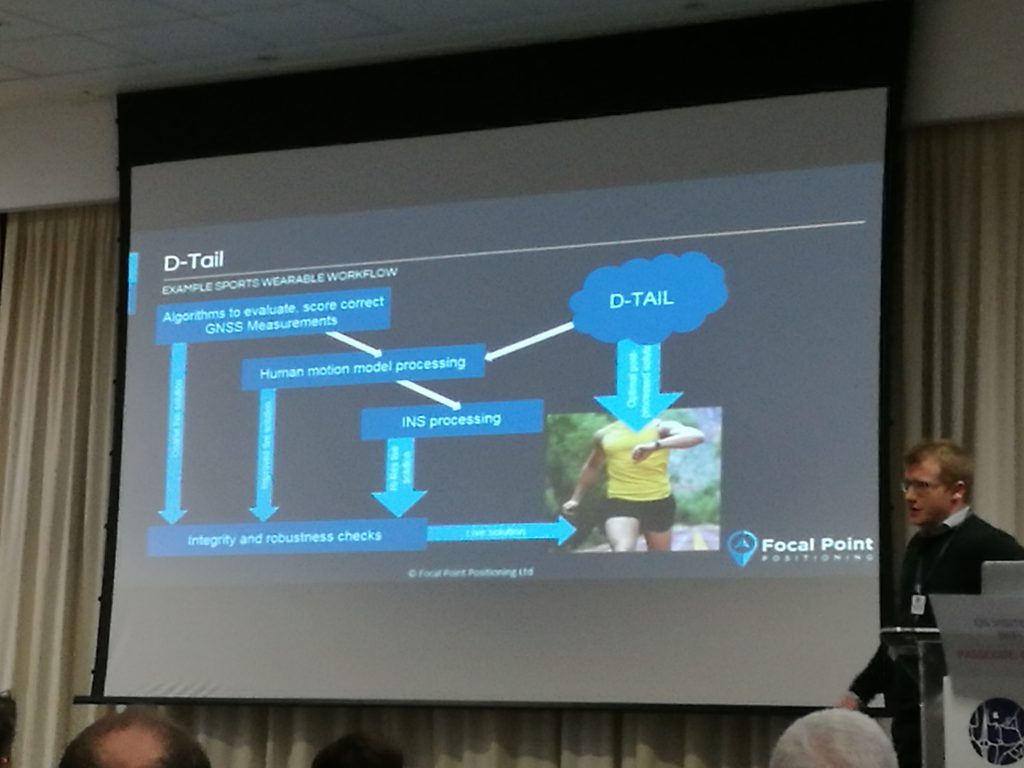 D-Tail uses inertial tracking to improve relative trajectory. The examples he showed had GNSS captured with a Google Pixel 1 phone, which was course to the point where you could not distinguish specific shops the tracks had visited, whereas the post-processed tracks using the D-Tail allowed you to identify where within the shops the tracks went.

The S-GPS solution (forgive me for my lack of GNSS knowledge here) used coherent integration to “focus” multiple GNSS path hits into a stack. By doing this, reflected signals are removed and strong/first signals are boosted.

There were also talks from Ordnance Survey on 3D GIS and Spirent who talked on simulating GNSS. I would elaborate more but both these subjects have been saturated in recent months. 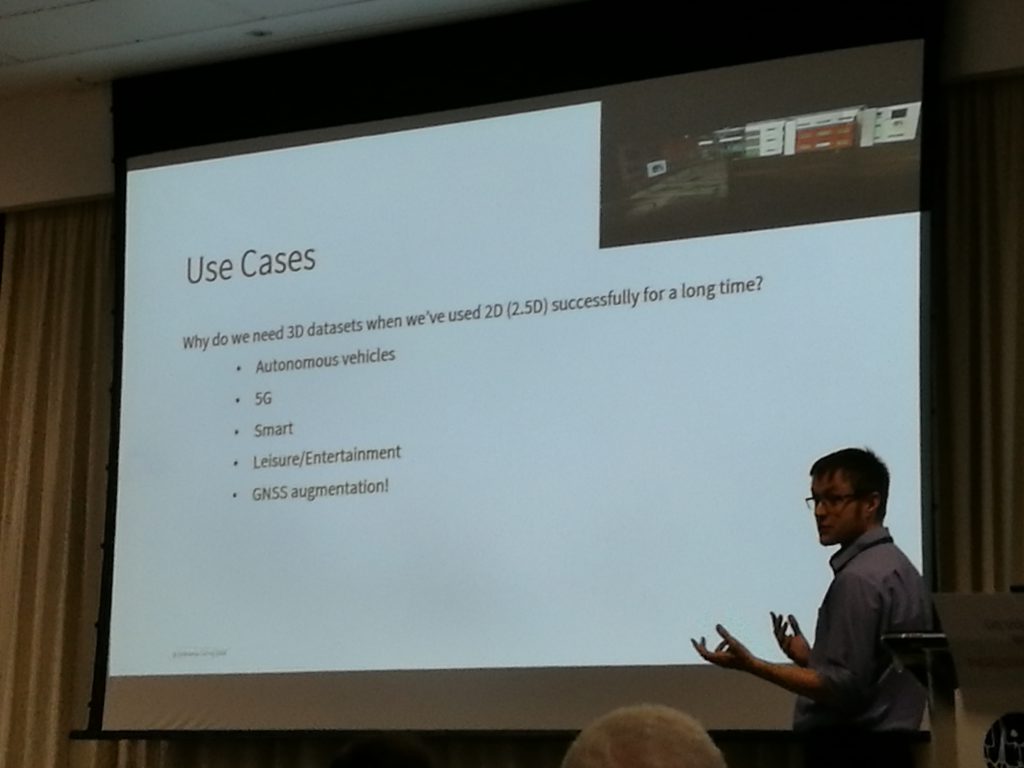 I have been in contact with all the above speakers and hope to obtain more detailed information which will be shared (hopefully) in a future edition of xyHt.