Test driving a new Tersus rover: There is more to the story than a $3,000 price tag.

The advent of a $3,000 high-precision GNSS rover holds a certain appeal, even more so when a test drive reveals that it holds its own with top-end rovers in many ways. But there is more to this story than just price.

A bit of a revolution is happening in the world of high-precision GNSS gear: a growing acceptance of fit-for-purpose geospatial tools and solutions, a greater global pool of innovators, and new players, like Tersus, that are offering affordable and capable gear. We explore the mini-revolution in this month’s editorial, “Inexpensive Does Not Mean Cheap.”

If you are in North America, you have probably never heard the name, Tersus GNSS Inc. I’ve been keeping an eye on this relatively new company (founded in 2014), and globally it has already made substantial inroads into multiple high-precision markets: precision navigation, agriculture, UAS, surveying, and construction.

Founder and CEO Xiaohua Wen was an established leader in the tech sector, having lead roles in, for instance, rolling out the largest broadband network in China. With his latest venture, Tersus, which is Latin (roughly) for “accurate,” his stated goal is “providing high-quality, affordable and centimeter-accuracy GNSS RTK modules and systems that solve positioning and navigation challenges.”

But what drew me to look at Tersus is that they are not taking the well-worn path of simply buying OEM GNSS components from other, more well-established firms and building rovers around them. Instead, Wen formed teams of bright, young GNSS engineers and seasoned developers to also build their own boards from scratch that could take advantage of the latest in R&D and opportunities afforded by multiple, rapidly growing constellations. 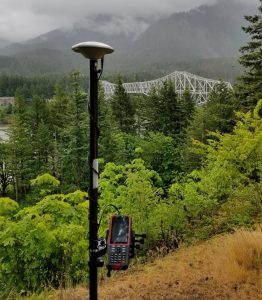 The David is Tersus’ entry-level rover system. We tested it on a baseline but also in various field environments. Note the bracket behind the controller with four clamps for various components.

Tersus produces many different GNSS boards—for OEM customers and for their own industry-specific systems—for the markets previously mentioned. For surveying, two models of note represent their high-end and entry-level offerings, respectively: the Oscar and David systems.

I chose to test drive the David entry-level system first for this article, but I will contrast its features with the high-end Oscar (we will test that at this year’s upcoming Intergeo Exhibition and will post about our experiences). Part of the reason for trying the entry-level rover first is the curiosity shared by fellow surveyors and readers who have asked, “Are $3,000 rovers for real?” After all, many of us remember the days when even single constellation legacy rovers would cost 5 to 10 times more than that.

Not to dwell on price, but it does surprise a lot of folks. As an example of just how affordable such systems are getting, the David (component-based system) tested runs $2,600 for a network rover, $6,200 for base+rover+2W UHF radios, and $7,300 for base+rover+30W UHF radios (all prices shown before VAT and duties).

The Oscar, which has the more familiar form factor of a combined receiver-antenna “bucket” on a pole, runs just under $8,000 for a network rover. Note that the Oscar also features calibration-free tilt compensation. This has only been available on any rover within the past few years and is a great leap ahead of the legacy (and cumbersome) magnetic-oriented tilt compensation that became common only in the past decade. 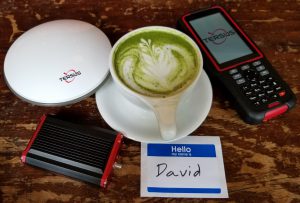 To demonstrate the relatively small size of the David receiver (lower left) here it is with a coffee cup (actually, a green tea matcha latte). The antenna is standard diameter, and the supplied controller is a ruggedized Android phone with a 4.3” screen.

The actual David receiver is about the size of a deck of cards and is designed to be used as a component for different applications. For instance, you could pair it with a smart phone and GIS mapping/inventory software or their own NUWA survey/mapping app that comes with the system. There is also a two-antenna-jack version for precise heading/navigation applications. It handles up to 20Hz update rates and can utilize RTCM2.3, RTCM3, CMR, and CMR+ corrections. It is IP67 rated.

There is 4GB of storage onboard. The static observation format is Tersus Binary. A provided tool converts to Rinex for post-processing and PPK. Communications with the TC20 controller (purchased separately for about $1,200) can be by USB or, preferably, a Bluetooth Lemo-connected dongle. I found this particular Bluetooth dongle to be a great improvement with those legacy 9-pin-serial dongles we all used to struggle with.

While the David, configured as a surveying rover, requires the connection of several cables (which could be a bit of a chore for many users), this component-like setup did have surprisingly cool lateral benefits. For one, the David does not have an on-board battery. Instead you connect a provided Lemo-to-USB cable to any standard power pack you choose (like the portable cell chargers you can find at any big-box electronics store). This frees you from expensive proprietary batteries. I used a standard 12,000mAh battery bank for a full day (when using as a network rover).The 2W or 30W base radio must use an auto battery (cable provided), but a David rover with 2W radio can still use a standard power bank.

The Tersus TC20 controller I tested is essentially a ruggedized (IP67 rated) Android phone, with a 4.3” (11cm) screen. It has an alpha-numeric keyboard (not a full keyboard, though), but I found it to be a nifty unit that fits the hand nicely, is not too heavy, is fast, and did as well as my smart phone in bright sunlight.

The system I tested came with its own controller software: Nuwa (which is named after Nüwa, a mother goddess from Chinese mythology). It has a lot of the basics for GNSS surveying, shortcuts you can set up for radio and NTRIP connections, and a simple yet intuitive interface. There are lot of options for editing reference framework preferences, and there is an option for sharing project parameters with others via a QR code it generates for each project.

You can also use Micro- Survey’s Field Genius if you need more depth of features or need a familiar interface.

I spoke with MicroSurvey’s OEM business manager, Marc Veinotte, who said, “Tersus is an OEM partner of MicroSurvey. We have several Asian OEM partners who package and sell Field Genius with their hardware. This is especially true outside of domestic China, in countries where a Westernized software is often preferred.”

I did all my testing with Nuwa but only had to look in the comprehensive manual once to find out how to add a coordinate definition file (that provides a library of the same standard reference frame definitions as you would find on any controller software).

A nice bonus is the suite of apps that comes with the kit. This includes Tersus Geomatics Office that I used for post-processing. It contains the essentials for baseline processing, transformations, and least squares network adjustments. 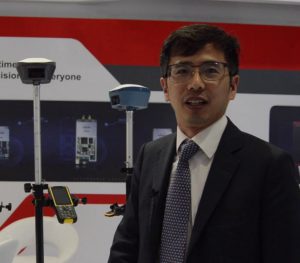 Tersus founder and CEO Xiaohua Wen with the Oscar rover, a more advanced version of the David rover we tested. The Oscar also has calibration-free tilt compensation.

When I test rovers, I visit a nearby National Geodetic Survey (NGS) calibration baseline (CBL). There I set up the base on one mark and check inverses against published values for other marks (at 150m and then 280m distant). Then I do single base from a nearby reference station and network solutions via NTRIP and a cellular hotspot. I could also use my smart phone as a hotspot, but I like a separate hotspot as it has an external antenna jack if needed in cell challenged areas.

I check these values against coords I have established for these marks from many hours of static observations and NGS OPUS (an online post-processing service). I also bring along two other, recently manufactured model rovers (I will not say which, but they are high-end units).

In short, the David system kept up with the other models in network mode, which is to say a consistent 2-3cm 3D. And the inverses in base-rover mode (I use the 2W radios) was 1-2.5cm 3D. The performance was consistent with the other rovers and with very few outliers in open sky and moderate canopy conditions. In thicker canopy, the David did struggle a bit.

I asked Tersus’ Nick Zhu about this, and he indicated that with sufficient Beidou satellites in solution it should perform just as well as the others in thicker canopy. I should note that on two of the three days I was testing few Beidou satellites were in view, but at the rate China is launching them, by next summer the point should be moot.

My primitive multipath test (holding up a metal sheet next to a rover) showed similar equitable performance. Overall the David performed well, and, considering the price, I could imagine that if users kept the performance limitations in mind for certain situations, they’d still be quite happy.

The only operational drawback I found was in managing and setting up the components. This might be okay for most use-case scenarios, but I could see the various parts and cables being a bit problematic if you’re carrying the rover through thick brush. You have the antenna up on the pole and the antenna cable wrapped around the pole down to a bracket that has four screw clamps. You clamp the David in one, your power supply in another, and the TC20 on the top one. In network rover mode this leaves one spare that I put the cellular hotspot in.

When setting up the base, you have a separate pole with a tall UHF antenna. On the main pole you have the GNSS antenna, the David, a small radio (also the size of a deck of cards), and a battery pack (more likely using the power cable connected to an auto or alarm battery).

The rover configuration for using a radio is the same as the network rover configuration, but instead of the hotspot you put the small UHF radio in the bracket, and you have a side extension that fits under the GNSS antenna that you mount the UHF antenna on. This setup is very similar to many other base-rover setups.

The system performed admirably, and that was just the entry-level system. I am expecting the future test drive of the Oscar to go as well and likely better with the additional constellation.

The David system might seem like a little bit of a tangle of cables, but then again I remember using early systems where we had to carry a jumble of components and batteries in a backpack. Folks can get used to this and might opt to leave most of it preassembled rather than piecing it together each time.

With the legacy price barriers now broken, the options available to us have grown dramatically: options for every comfort level and value proposition. We’ll keep an eye on Tersus as they are now just getting started here in North America. If their success in other parts of the world is any indication, they will likely become a more-recognized name. More choice is a benefit for our industries and professions.