This entry is part 4 of 7 in the series xyHt in print August 2015
Above: The Royal Navy submarine HMS Astute. Credit: LA(Phot) Paul Halliwell/MOD.

Will freezing sub-atomic particles one day supplant GPS as the primary navigation technology?

Many of the most accurate measurement devices, including atomic clocks, work by observing how atoms transfer between individual quantum states. The longer the atomic transition can be observed, the more precisely it can be measured. Slow-moving, ultra-cold atoms enable the longest observation times and the highest precision. By illuminating the atoms with laser light, the Doppler effect is used to cool them down to micro-kelvin temperatures, a task normally achieved in a large apparatus.

With this in mind, imagine being able to navigate to a meter accuracy anywhere in the world: underwater and without fear of GPS jammers. Is this a pipe dream? No, according to Neil Stansfield of the Defense Science and Technology Laboratory (DSTL) at Porton Down, UK.

Stansfield says, “Today, if a submarine goes a day without a GPS fix, we’ll have a navigation drift of the order of a kilometer when it surfaces. Quantum accelerometer will reduce that to just one meter.”

DSTL’s prototype quantum accelerometer, which resembles a one-meter-long shoe box, will be trialed on land in September 2015. It will initially operate along just one axis, before two more sets of lasers and trapped atoms are added to accommodate motion in all three dimensions. Each will cool one million atoms of rubidium.

“Once we have understood the first generations, we’ll start to miniaturize it for other applications,” says Stansfield.

It’s not a done deal yet, though, because the accelerometer can’t distinguish between tiny gravitational effects and accelerations caused by a vessel’s movement. “If the submarine passes an underwater mountain whose gravity attracts it to the west, that feels exactly like an acceleration to the east,” says Edward Hinds at the Centre for Cold Matter at Imperial College London; he is developing the accelerometer for the DSTL. “This means that very good gravity maps will be required to navigate correctly.”

The DSTL isn’t alone in pursuing quantum navigation; teams in the U.S., China, and Australia are chasing the same prize.

“Super-accurate navigation makes sleeping easier for the captain of a submarine,” says John Powis, head of the NATO Submarine Rescue System in Faslane, UK, and a former navigator on Royal Navy submarines. It will also make it easier to go on patrol undetected, as submarines will no longer have to expose a mast to GPS, he says.

Powis thinks this technology may have the greatest impact on future generations of weapons once it has shrunk in size. “The submarine does not need to know its position in meters and centimeters,” he says. “But a projectile, like a missile or shell, might.”

The DSTL team believes the technology has applications beyond warfare. “Ten to twenty years ago this would have needed a huge cryogenic cooler, but laser-cooled atom clouds are changing all that,” says team leader Stephen Till. He says future generations of the technology are likely to make their way into everything from cars to our smartphones. “We’re convinced the size and power will come down for broad use.” 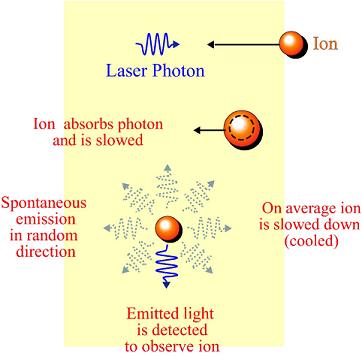 The method of laser cooling was independently proposed in the 1970s by scientists Hänsch and Schawlow for the cooling of free atoms and by Wineland and Dehmelt for the cooling of trapped ions (see references at end). This technique exploits the momentum carried by the photons in a laser beam to slow the motion of atomic particles.

Laser cooling is achieved by using a laser tuned slightly below the center frequency of a strong (allowed) transition in the atom or ion to be cooled. The radiation is therefore Doppler-shifted into resonance with the transition frequency when the atom is moving towards the laser beam, and out of resonance when it is travelling in the opposite direction. This means that the atom preferentially absorbs photons when it is moving in the opposite direction of the laser beam, and each photon absorbed reduces its momentum.

The photons resulting from spontaneous emission to the ground state, however, can be emitted in any direction and, over many scattering events, have no effect on the atom’s momentum. The net effect is that the atom is slowed down (cooled).

In many of the atomic species suitable for use as trapped ion optical frequency standards, the transitions used for laser cooling lie in the blue or UV regions of the spectrum. Therefore the specialized laser sources required represent one of the challenges in the development of these standards.

However, for ions, the use of laser cooling allows the ion to be confined to a region of dimensions less than a wavelength of the light used to probe the reference transition, giving a spectrum free of the first order Doppler effect. For neutral atoms, Doppler cooling can reduce temperatures to the few-millikelvin regime, and in certain cases to the microkelvin regime.

Being able to both cool and confine the ion or atoms we wish to use in a frequency standard can significantly reduce the systematic errors in our measurements. Ions, once cooled in this way, can be held for long times in a variety of ion traps based on oscillating electric fields for confinement. Neutral atoms cannot be trapped in this way due to their lack of charge and need a different type of trapping potential. Two useful methods are the magneto optical traps, which combines laser cooling and magnetic fields, and dipole traps, which use the dipole force to confine the atoms.