Barriers are being removed for adaptable and inexpensive, high-precision GNSS.

Many of you may be familiar with traditional base-rover applications for RTK such as surveying and mapping—with precision that typically comes with a large price tag. However, Swift Navigation provides a multi-frequency, multi-constellation, fully RTK-capable GNSS receiver called the Piksi Multi with a smaller price tag.

This is not a complete system as you might picture a survey rover or autonomous vehicle or UAS navigation system, but that was the idea from the start. Instead of trying to reinvent tools, Swift provides fundamental components, evaluation kits, and more that enable developers and savvy practitioners to integrate high-precision GNSS into all manner of positioning, location, and navigation solutions.

In 2014, Swift Navigation might still have been viewed as a startup in the development of GNSS-based solutions. The four years since have been marked by the rise of several technologies, including UAS (UAV, RPAS, drones) for the consumer, professional, and “prosumer” and autonomous vehicle development. These are just two of the growing markets for integrated navigation technologies for which GNSS is an essential component.

Rather than trying to anticipate the final form and function of emerging end-use products as complete systems, Swift chose to focus on the essential GNSS element. While this is not a standalone base-rover pair in the form of the complete (and by comparison pricey) systems from the big-name manufacturers, with a little tinkering you can achieve essentially the same results at a fraction of the cost.

Swift offers evaluation kits, with two Piksi Multi receivers, two (915 MHz or 2.4 GHz) radios, antennas with ground planes, and software for your laptop to configure them. You can set up one as a base, with a known set of coordinates, and use the other as a rover (on the ground, in the air, and on vehicles or robots), fixing in seconds and yielding centimeter-grade positions.

Resultant positions can be streamed out (NMEA) to any software that accepts external positions (e.g., apps on phones, tablets, or data collectors) or to integrate with other navigation components (e.g., inertial, vision-based, laser-based, etc.).

Results from Swift’s tests of the Piksi Multi $595 compared with a receiver that retails for about $7,000.

Swift recently conducted tests pitting their $595 Piksi Multi against a well known, high-end receiver (brand and model not specified) that retails for about $7,000. Many of the new wave of “bring-your-own” high-precision—cm-grade—receivers offered to pair with mobile devices for applications asset mapping retail for about $7K. There are, though, several lower-tier receivers (sub-meter, sub-foot, decimeter-grade) that are much less than $7K, but cm-grade GNSS, presently, comes with large price tag.

While these tests were conducted by Swift, I checked with several developers who have been working with the Piksi Multi, and they have shown me data that concurs with Swift’s findings.

Mostly, the Swift results are within 1.5cm (horizontal) of the compared receiver. Time to first fix (TTFF) is less than 60 seconds from a cold start. Re-initialization after a loss of signal of 30 to 50 seconds (e.g., a long tunnel, deeply forested corridor, or urban canyon) is only five seconds.

If there is just a brief outage (e.g., short tunnel or bridge) it will regain fix in two seconds.

Response times are already pretty good, but for certain applications developers should be able to leverage trajectory data like that from IMUs and vehicle-speed-measurement devices to improve on regain-of-fix.

The Piksi Multi was released in February, 2017 and is now the flagship product for Swift. A steady progression of firmware updates has racked up a growing list of features, offered at no additional cost to Swift customers as opposed to an á la carte model (typical of many manufacturers or similar but often more-expensive receivers).

Here are highlights of current features from the Piksi Multi spec sheet (more features are in development):

*That translates to a lot of additional processing power with on-board Linux on which developers can run their own applications.

Broad application of RTK positioning, for instance for the autonomous markets, will require ubiquitous and robust sources of RTK corrections, so Swift launched a subscription-based RTK correction service, called Skylark, delivered via the cloud. Skylark has launched in limited markets but with a plan to expand in the USA and globally.

While details are limited at this time, the corrections service appears to be suited for the growing autonomous markets, UAS, and other applications seeking high-precision relative RTK results.

Skylark already serves several major metropolitan areas like the Bay Area, L.A., San Diego, Phoenix, Detroit, and Pittsburgh; it’s probably not an accident that these were chosen because they are magnet cities for autonomous R&D firms.

The following case studies exemplify the diversity of applications served. 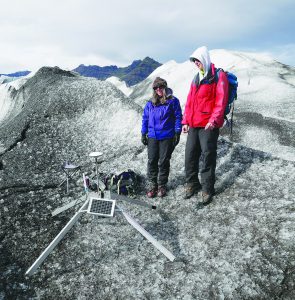 Members of the Univ. of South- hampton’s Glascweb team use a Piksi Multi to monitor glaciers.

Students from the Technical University of Denmark have prepared their entry for the Mobile Eco challenge for fuel-efficient autonomous vehicles. Dubbed the DTU Roadrunners, the students have integrated lidar, IMU, and a wheel-speed sensor with a Piksi Multi. They also used the Multi for an RTK base, and reports from test-track runs meet the 2cm horizontal, 6cm vertical, and fast-convergence-time results they sought.

Glaciers in Norway and Iceland and landslides in Tijuana are being monitored with Piksi Multi receivers (as both base and monitoring stations) by the University of Southampton’s (UK) Glascweb team. The low-power features and fast convergence of the receivers held particular appeal for the team. The challenge of very remote locations puts power usage at a premium. Their Multis are powered up with a rapid convergence for observations and powered down in between.

Skycatch is another company whose innovative approach to GNSS took them from startup a few years ago to serving many large enterprise customers. Skycatch built one of the first (if not the first) complete UAS solutions designed especially for the construction, mining, and aggregate industries.

One challenge for the growing UAS market is that the need to set up and establish coordinates for ground control points (GCPs) is a laborious and often expensive proposition. By integrating the Piksi Multi with their Explore1 high-precision drone and Edge1 base station, Skycatch delivers centimeter-accurate RTK data without GCPs, right from the field. 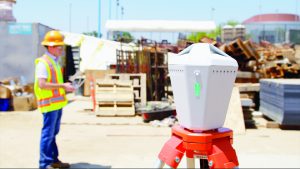 Skycatch Edge 1 base station (with the Piksi Multi receiver inside) for use with their UAS at a construction site.

Swift is working to build complete turnkey end-user solutions with its line of GNSS receivers and corrections service. For developers, products like the Piksi Multi, with its GNSS, IMU, and easy-integration features, already does much of the heavy lifting in building solutions for multiple markets.

Surveyors and mappers may not see in Swift the traditional base/rover/data collectors you are used to buying off-the-shelf—not yet, but that might not be too far down the road. To be fair, some firms have taken simple, low-cost L1 OEM boards (from other GNSS board manufacturers) and have built whole systems around them, but with limited precision and long convergence times, not quite ready for many surveying tasks. What Swift adds to the mix is capable but affordable components and services; these spell a lot of opportunity.

When will we see a surveying base rover pair with the Piksi Multi at its core by third parties? Skycatch certainly has integrated Swift into its complete system for UAS. But what of the standalone system for surveyors and mappers, or a “bring your own” peripheral for mobile devices using mapping apps like Esri Collector? It should only be a matter of time.

As noted, you can (with a little “McGuyvering”) use Swift’s receiver-radio kits for some surveying applications already, but who will build the “BobNav 300” or “CarolNav+” systems? Maybe you.