Cartographer “Captain Alice” teaches children to read and use maps as a communication tool. 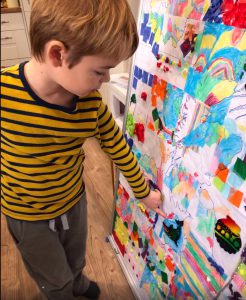 Art director Anthony (Captain Alice’s son) describes details he imagines on a map of his own design.

Alice Gadney believes her cartography business, Silver7 Mapping, is designed “to help people understand the world around them and their need for a great communications tool—the map.” And when she says “people,” she’s also including youngsters, starting with her five-year-old son, Anthony, who inspired her to create a companion endeavor called Mini Map-Makers.

The organization is based in Bedford, England. Gadney says, “Our vision is to teach all the children in the UK, and eventually the world, about how to read maps and how to relate maps to real places. We deliver fun, interactive, and memorable workshops, plus resources that children and adults enjoy and use later.”

Anthony, who came up with the company name and appears in the logo along with his friend, Isabelle, is the artistic director. “He tells me what topics he is doing or places that are good to use maps,” and Gadney creates them. “He has a pretty good imagination and understanding of the world.”

The spark that started Mini Map-Makers came from something Gadney’s father had told her. “My son was born two months after my father passed away, and he would say, ‘Do as much as you can for him and do it with him.’

“So when my son was four years old, he started school and wanted me to teach his friends all about maps. I asked the teacher and was told, ‘Yes.’”

At first, Gadney says, “I set up a 40-minute workshop and ran it for three groups of 30, one after the other. I have never been so tired in my life.”

Now she teaches throughout the year in schools and activity centers and with the Girl Guides and similar groups.

“I am creating resources that can be adult-led in a school or home-education environment,” she says.

Asked what fascinates children about maps, she says, “They cannot believe that what they are seeing is actually real—the tiny detail on the huge paper—so they imagine what the place on the paper is like.” Is it hilly? Cold? Are there forests? Are there sheep or other animals in the field?

“They are building up mental pictures of places. Children’s brains are alive.”

And while there’s a time and place for them to be quiet and listen, it’s equally important to let them express themselves, she believes. “It is all communication, and that is what maps are, a communication tool.”

In the role of Captain Alice, Gadney has an activity called “X marks the spot.” She has the children look at the Great British Map with “its triangular shape with all the islands, and with the seas and capital cities on it. But then for it to have been made in 1518 with no roads or cities but horse trails and forests, Captain Alice transports them back in time.”

The lesson includes placing colorful stickers on the map, which is “brought to life with characters, and they start to tell their own stories. Anthony still has his map by his bed, and I ask him to tell me what happened in the picture. He comes up with something different [each time].

“But always along the lines of his ship overtaking mine so that he is now the captain,” she adds.

Childhood and Career with Maps 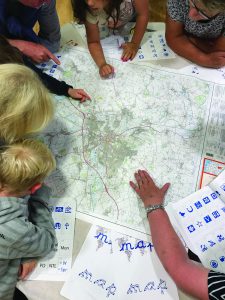 Students play “X marks the spot” with stickers and stories.

Gadney has 16 years of experience creating maps, whether on paper, digitally, or in an interactive format for both the private and public sector.

She recalls that maps were a definite interest to her when she was a child. “My great-aunt would show me maps of her travels—Egypt, Kenya, Singapore, and other amazing places” during the 1930s and 1940s. Her slideshows contained none of the boring shots usually associated with camera-wielding travelers. Instead, “there were close-ups of lions at watering holes, elephants, and a cheetah,” all contributing to her fascination of what was out in the world.

“I went to a boarding school, and it was pretty bleak and full of very well-off girls. I didn’t fit in at all. I sought solace in my geography, French, and art lessons.”

In later years looking at her report cards, she recalls, “It seems like I picked up geography very easily and seemed to do well. I think it was an escape from the unpleasant circumstances I found myself in. I was much happier in a rainforest or up a volcano smelling the sulphur.”

Gadney is a professional cartographer, starting her career in London mapping bus and train lines. Eventually, she joined the gas and oil industry, working in East Africa’s Mozambique, Brazil, Australia, and parts of Europe. 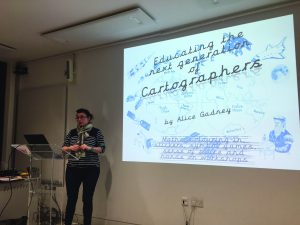 Alice Gadney trains adults to teach and inspire students
with resources from her organization.

“After a while and a lot of travel, I thought I could do this on my own, so I set up Silver7 Mapping in 2008—just about four weeks before the financial crash. It actually didn’t affect me as I was employed working” in projects outside the gas and oil industry.

One project was with Crown Estate in central London, one of the country’s largest property managers.

“I helped train their cartographer about GIS. He was an old-school, classic cartographer—wonderful handwriting and an amazingly steady hand. He was not interested in the ways of digital mapping, but he eventually got there.”

During her tenure, she says she was shown impressive historical artifacts, including maps that dated back to the Crown of Henry VIII.

While surveyors and cartographers work together, she says she doesn’t have a desire to be a surveyor—although, “I did some surveying in university and it was a fun set of lessons. But no, I prefer the data sort out and manipulation and then the fun design bit at the end of the process.”

She posts on her company’s website the philosophy that “I’m only as good as my last map.”

Gadney believes maps are here to stay. “For thousands of years, we have been communicating through pictures about places. Today we use imagery from space. Maps are going to be there for a long time, especially the more data we push out there. We cartographers will need to find more intuitive ways of displaying it.”

Quite possibly, those coming up with such innovations will be students of Mini Map-Makers.