With a clever mobile app and a can-do attitude, Swiss surveyors have created a 3D model of a river valley in the Alps to improve risk prediction of landslides. 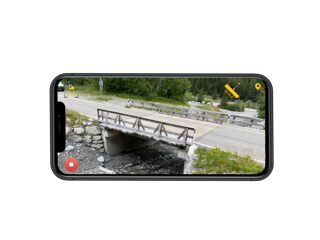 The 7 p.m. storm forecast was not only accurate, it was ominous. Torrential rains pounded the ski town of Val Ferret on the final day of August last year, triggering huge landslides roaring down the rocky slopes. Two bridges were washed away and several roads were closed. There were no casualties, but the storm’s aftermath left 80 people isolated in an otherwise picturesque valley at the foot of the Swiss Alps.

As the head of the hydraulic department for Moret & Associés, a road engineering company in Switzerland, Léonard Evéquoz knew he and his team would be called to check on the road damage. Evéquoz is a hydraulic engineer and his expertise on water and natural hazards such as flash floods and debris flow would once again prove useful.

“After the storms in Val Ferret, our team was tasked to displace an existing road in order to reduce the risk to drivers that pass through the valley,” says Evéquoz. “The road crosses two dangerous mountain streams and it is prone to debris flow during summer storms.”

Fast-moving and highly destructive, debris flows are triggered by heavy rainfall in mountain areas. They are one of the most dangerous geological hazards, posing a significant danger to life and property. People from Val Ferret have adapted to this by using special wooden bridges that are built in such a way that they can be easily removed and replaced within a few hours after being damaged by an avalanche of debris and water.

Moreover, there is an alarm system located upstream that automatically activates the valley’s traffic lights during flash floods, alerting drivers to stop at a safe distance from the bridges.

Aside from putting in place these safety nets, engineers like Evéquoz must also create a digital terrain model of the valley to calculate the risk of flowing debris.

Their calculations will help public officials make appropriate decisions to manage the hazards posed by landslides in the area. Yet, producing a 3D model of the valley requires that engineers go down the steep slopes to collect topographic data, posing an immense logistical challenge even to seasoned surveyors.

“The river channels are extremely steep and they are covered by a thick layer of vegetation. After the floods, measuring the bottom of the bridges was either not possible or very time consuming. It would cost us a lot to follow traditional survey methods,” said Evéquoz.

Scanning the river channel with KickTheMap

Despite the rigorous landscape, Evéquoz and his team remained undaunted. With a smartphone at hand, he and his team went down the valleys to scan the area using KickTheMap, a professional end-to-end photogrammetry mobile app service for creating accurate 3D models.

To collect the necessary data for creating the model, Evéquoz and his team followed a straightforward workflow.

“We were a team of three people with different tasks. First, we placed reference points along the river channel, making sure that they are located in an optimized way to reduce the errors in the final digital terrain model,” Evéquoz said. 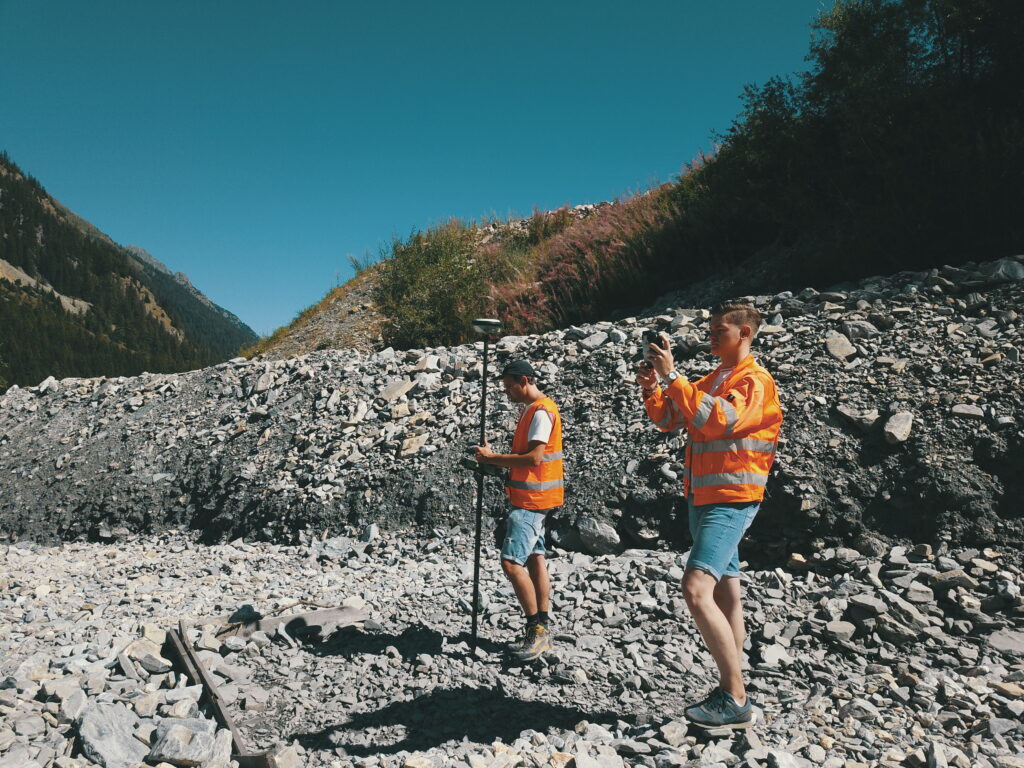 “After that, another team member scanned the area using a smartphone with the KickTheMap app. Scans were done starting upstream then going downstream. And finally, another person collected the GPS coordinates of the references points.”

After scanning the area with the app, all the captured data were uploaded in the KickTheMap web platform and processed on the cloud. A few days later, Evéquoz received an e-mail notifying him that his 3D model was already available for viewing and downloading. The resulting digital terrain model of the river channel can now be used to simulate and predict the debris flow in the Val Ferret valley, as well as serve as a geometrical basis for designing new roads and bridges.

“Using KickTheMap allowed us to cover a wider area for taking terrestrial measurements even when the precision requirement was the highest,” says Evéquoz. “The quality and the precision of the resulting 3D model will now allow us to directly use it for designing new structures in the future.”

KcikTheMap: an app by surveyors for surveyors

Jérémie Locquet, developer of KickTheMap, has obviously designed the app with surveyors in mind. He is a geomatics engineer himself with 10 years of practical experience in land surveying.

“There was clearly a lack of low-cost tools to do complete quick and accurate 3D models for on-site workers,” says Locquet. He says the idea behind the app mainly came from his field and research experience to improve and adapt existing photogrammetry tools.

“As a surveyor in my previous jobs, I was looking for an easy and fast tool to capture and measure an environment without setting up a total station or GNSS device,” he said.

Locquet has worked on the KickTheMap app for the last three years before releasing it last year. Based on augmented reality and mobile phone technologies, the app automatizes and optimizes the triggering of images as it scans an area. It has since received many accolades, including a cash award and grant from the FIT Foundation, a Swiss business organization that has been providing financial assistance to startups since 1994.

Alexis Roze, who oversees the app’s product strategy and business development, says KickTheMap is built around four main points. “First, our app is easy to use and does not require prior training to use it. Second, the end results are professional grade because as experienced surveyors, we are focused on accuracy and quality over just providing good-looking 3D models. Third, the app is accessible to anyone who has a smartphone. And lastly, we focus on speed. Anyone can scan and survey 100 square meters in one minute. We know that time is important to our users.”

Like Locquet, Roze is also a geomatics engineer. “We noticed that 3D modeling is only accessible with expensive tools and advanced knowledge, especially in the construction and utilities sectors. With the progress of photogrammetry over the last 10 years, combined with the surge of augmented reality apps, it was obvious to us that smartphones could meet the need for quick 3D modeling that can be done by any worker on any site,” says Roze. 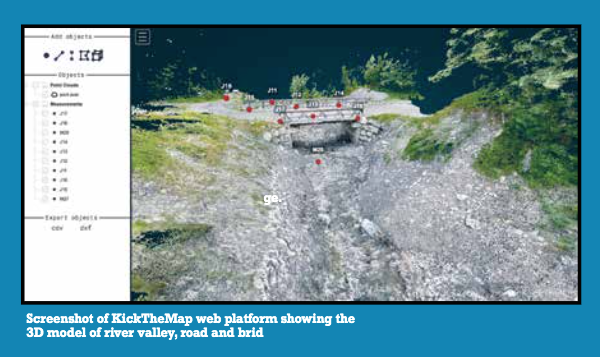 The app is lightweight (6.2 MB) and can be used to produce 3D models with an accuracy of less than three centimeters (1.2 inches). The timing for data delivery is also fast, usually less than 24 hours for projects fewer than 1,000 images. Another advantage is its affordability.

“The use of our service is free up to 150 images per project. We made our payment plan affordable and flexible so that it can fit our users’ business activity,” says Roze.

For Evéquoz, the app’s real advantage is its simplicity and portability, especially after successfully using it in Val Ferret. “The app was very user-friendly and no prior training was needed to operate it. The instructions were simple and were clearly given, from the activation of the app to the actual scanning of the river channel,” he says.