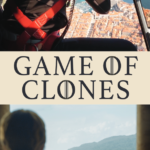 This entry is part of 6 in the series October 2020

How lidar imaging turned Dubrovnik Old Town, Croatia, into a realistic fantasy world! The sight of King’s Landing, the capital and largest city of the Seven Kingdoms, is spectacular. The population found within verges on half a million but from a bird’s eye view, it is serene and calm, with the gentle sounds of Blackwater Bay in the […] 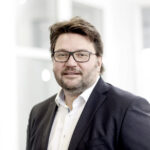 Christoph Hinte on 25 years at Intergeo Christoph Hinte is the organizer of INTERGEO, the world’s biggest annual geospatial trade fair and conference. As CEO of HINTE Expo & Conference, he has been involved in the development and strategy of INTERGEO events since in 1995. Hinte tells xyHt why this year’s event, October 13 to […]

Joining the 3D Laser Scanning Pioneering Start-up, Cyra Technologies Thus far in my “insider story” series (June, July, August, September), I have described how, while working for Trimble in 1996, I first became aware of the technology and Cyra Technologies, a pioneering start-up developing it. After a jaw-dropping demo, I dove into evaluating the technology and Cyra for a […] 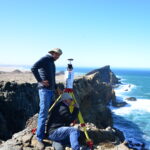 Diamond mine memories: A century or so ago, miners in the small settlement of Pomona pulled 50,000 carats of diamonds a month from the vast, arid nothingness of land called the Sperrgebiet—10,000 square miles of coastal desert in southwestern Namibia in Africa.  The sandy ground has long since given up the last of its precious […] 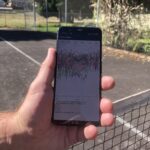 GnssLogger? Many surveyors are familiar with the U.S. National Geodetic Survey’s Online Positioning User Service (OPUS), a cloud-based processing service that allows them to upload a Receiver-Independent Exchange (RINEX) file and receive results in minutes. Soon, they may be able to achieve centimeter accuracy by accessing raw GNSS measurements on their Android phone. Google announced […]

Yes, We Scan! KickTheMap is a Swiss Kick in the App for 3D 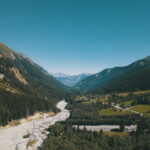 With a clever mobile app and a can-do attitude, Swiss surveyors have created a 3D model of a river valley in the Alps to improve risk prediction of landslides. The 7 p.m. storm forecast was not only accurate, it was ominous. Torrential rains pounded the ski town of Val Ferret on the final day of […]