Last week, April 4th – 6th, one of the largest gatherings for the offshore industry took place, Ocean Business, in Southampton, UK. The bi-annual event is a large deal for the maritime industry. When I say large, I actually mean huge; there are over 350 exhibitors from 26 countries and 166 training and demonstration workshops in just those three days!

What is amazing about Ocean Business is that the whole maritime industry is represented. Of course there are the surveyors, the geologists, and the equipment hire companies, but also there are representatives from the GIS, CAD and engineering sectors all sitting side by side. 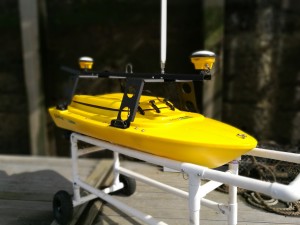 Another of the autonomous vessels on display. Note the A-frame-type structure over the vessel to make mounting sensors easier.

At the last event talk was about the latest Reson multibeam device. Whereas before conversation would have been around capturing scour and wreck details, this year was talk of analysing pipelines for cracks or whether bolts were where they should be. It was hard at times to remember that I was at an offshore event as the technology has developed so quickly.

Of course, in two years, technology has shrunk. With the onshore industry, this is not overly exciting but offshore this is BIG news. Take, for example, the Planet Ocean micro AUV, developed with the National Oceanographic Centrre. This micro-UAV is only 50cm long and shaped like the traditional “torpedo”. Being fully autonomous allows it to capture data in ways never previously considered.

Big improvements to Doppler Velocity Log (DVL) technology was demonstrated by most of the equipment exhibitors like Sonardyne, Nortek and Kongsberg. If you don’t know what a DVL is, it how you get location when you are underwater and have no GPS/GNSS. The systems on show were capable of capturing the location at better than 0.01m at depths up to 6000m. Just think that over and relate that to your super cool iPhone!

The data providers and geospatial companies who were present were murmering about BIM and how it is going to start to become an issue. How does BIM integrate with the information captured and provided offshore? Can the maritime industry build a common spatial data infrastructure? 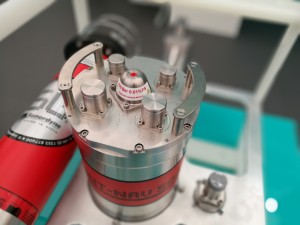 The Sonardyne SPRINT unit is as beautiful as it is clever.

One company I met that were really making strides on this was OceanWise. Dr Mike Osborne, a respected hydrographer, has taken it upon himself to get the maritime industry thinking about these issues and working towards a solution. OceanWise provides nautical geospatial data but also trains the offshore and onshore industries in the use of GIS for nautical charting, including maritime standards. Mike  has set up maritime spatial data infrastructure groups across the world with 33 countries already involved, something which is unheard of in the onshore industries. Mike has agreed to be interviewed by xyHt, so look out for that in a later issue!

My final comment is about how much Lego was on display. I mean, do these guys have nothing better to do with their time? As much as there was UAVs, transponders, ROVs and new vessels, there were Lego survey vessels and tech remodelled in Lego. Maybe it is because I wasn’t allowed to take one home that I am so curious about it.