The surveying challenges for construction related to a particle accelerator are exacting—but surprisingly familiar.

Trillions of neutrinos from the sun and other celestial objects pass harmlessly and unnoticed through our bodies each second. These tiny particles are among the most abundant in the universe–a billion times more abundant than those that make up stars, planets, and people–yet among the least understood.

They are challenging to observe, let alone study, because they have no electric charge and mostly pass right through the atoms that make up ordinary matter, very rarely interacting with it.

How do neutrinos work? What role do they play in the evolution of the universe?

This physics experiment has an 800 mile baseline, yet critical components require a relative alignment on the order of 100 micron (one millionth of a meter).

Fermilab, in Batavia, Illinois–one of 17 federal scientific laboratories run by the U.S. Department of Energy–hosts of the Deep Underground Neutrino Experiment (DUNE), an exciting new study of neutrinos. This collaboration, launched in January 2015 and involving more than 1,000 scientists from all over the world, is expected to determine definitively the properties of neutrinos, the dynamics of the supernovae that produced the heavy elements necessary for life, and the possibility of proton decay.

DUNE will be responsible for designing, building, and operating the detectors required for the experiment. The information they generate will be analyzed by scientists at collaborating institutions.

DUNE requires a neutrino beam, nearby detectors, and far-away detectors–that are nearly a mile underground and kept extremely cold by means of cryogenics. The neutrino beam, the world’s highest-intensity, will be generated at Fermilab using one of its existing particle accelerators, the Main Injector, located in a circular tunnel with a 0.6 mile diameter.

The far detectors–four 62 ft x 62 ft x 213 ft devices–will be constructed at the Sanford Underground Research Facility (SURF) in a former mine in Lead, South Dakota. Together, the beam and the two sets of detectors are called the Long-Baseline Neutrino Facility (LBNF). Depending on government approvals and funding, construction at SURF could start as early as 2017 and at Fermilab as early as 2018.

Neutrinos created by the LBNF beamline will travel about 800 mile, straight through the Earth’s mantle, to intercept SURF’s massive neutrino detectors (that can also detect the birth of neutron stars and black holes by catching neutrinos from exploding stars). Because neutrinos pass easily through soil and rock or even miles of solid lead, these ghostly particles do not require a tunnel to travel through the Earth. 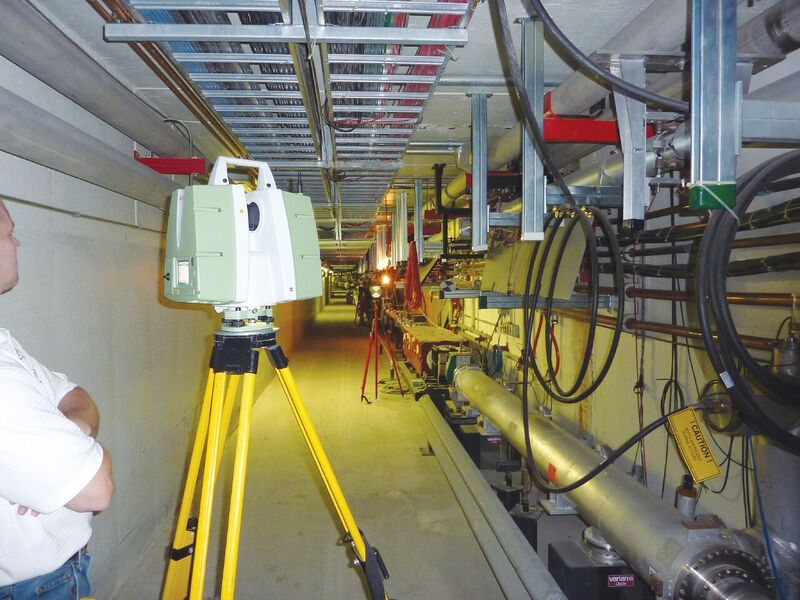 The survey enabled Fermilab staff to route in new equipment in a very tight space.

The surveying techniques and the construction accuracies for the tunnel housing the particle accelerator are similar to those for a subway tunnel. The difference is in the placement of the magnetic components that guide the particle beam, which usually requires precision alignment on the order of 100 micron (one millionth of a meter) component to component, according to Horst Friedsam, head of the Fermilab Particle Physics Division’s Alignment & Metrology Department. Other than quality control, his department is not involved with the construction part of the tunnels.

To survey the Main Injector’s ring tunnel, Fermilab contracted with Exact Metrology, based in Cincinnati, Ohio, and Brookfield, Wisconsin, which provides a full range of 3D laser scanning contract-measurement services and metrology equipment solutions. The relationship between Exact Metrology and Fermilab goes back about a decade.

“We try to be a one-stop shop for any kind of high-tech measurement device, whether it be for inspection or reverse engineering,” says Michael Trudeau, the company’s outside services coordinator. His typical role is to provide quoting and, at times, project management for long-range scanning projects.

“We sell equipment (new and used), we rent equipment, and we perform contract services. Each customer has a different level of need for high-tech measurement, and we try to help properly identify that need and get the right tools in their hands.”

Exact Metrology’s work with Fermilab follows this pattern, except that the lab’s needs are extremely large, diverse, and ever-changing. At times, it makes sense for the lab to buy a specific piece of equipment, while in other cases it is more cost effective for it to contract out the work. The size of the DUNE project has warranted both equipment purchases and contract service work.

For Exact Metrology, Trudeau points out, the largest surveying challenge was maintaining a good control network.

“It was a very long curving tunnel, and that is a nemesis for maintaining a control network because it’s hard to compensate for the natural drift without closing the loop.

“Luckily, Fermilab has thousands of control points established that were shot in with laser trackers and confirmed to exhaustion. So, they had an impressive, verified, very well controlled network already in place. Then, we utilized an adaptor tool developed by Fermilab to tie in our laser scanner to their laser tracker control.”

For use as targets, Fermilab took 1 inch stainless steel spheres and cut them in half minus the thickness of the scanner target, Trudeau explains.

With this piece of tooling established, it was very easy to tie into their control network. You can now buy similar targets, but, to our knowledge, at the time nothing like this existed.”

Fermilab staff periodically measure in their equipment with discrete points.

One of the purposes of Exact Metrology’s survey was to capture everything that was in the facility so the Fermilab staff could figure out how to route in new equipment in a very tight space. “They just had little points floating in space. You could not get any spatial orientation as to where or how big the equipment was or what the obstacles were, such as piping or wiring. With laser scanning, we were able to capture everything that was visible in the area.”

In the tunnel, humidity did not seem to be much of an issue, according to Trudeau. As for radiation concerns, they just had to be aware and follow procedures. “In several areas, the equipment was quite congested, so it took more than the average number of set-ups to make sure that we were able to capture everything properly,’ he says.

For the DUNE project, Fermilab asked its alignment and metrology department to line up the beam centerline to the far detectors–which, besides being about 800 mile away are also about 4,800 ft below ground–to within 66 ft. This corresponds to an angular error of +/-0.15 micro rad, says Friedsam.

Recently, his staff performed GPS, gyro, and plumb line surveys at the Home Stake mine in South Dakota to provide the connection among Fermilab, the mine on the surface, and the underground network.

“We used three, 1-mile-long plumb lines to drop the surface coordinates into the mine.”

Fermilab’s staff performed GPS, gyro, and plumb line surveys at the mine in South Dakota to provide the connection among Fermilab, the mine, and the underground network.

Given the travel costs from Batavia to South Dakota, Friedsam’s group contracted out many aspects of the mine survey to a local survey company that then set up the traverses underground and established the plumb lines.

“During a one week trip to the mine,” Friedsam recalls, “we utilized our DMT Gyromat 2000, a 3″ instrument, for azimuth observations in the mine.”

Exact Metrology’s collaborative relationship with Fermilab makes it difficult to define when one project has ended or another one started, Trudeau points out.

“For instance, if we scan part of a beam line for the DUNE project, that data is most likely being used on several other projects as well and vice versa. I think our involvement started in 2010, helping them identify a solution to scan during the construction of the far detector of the NOvA project.”

(That’s Fermilab’s current flagship neutrino experiment, which sends a beam of neutrinos to a 14,000-ton particle detector 500 miles away in Minnesota.)

Additionally, Exact Metrology has worked with Fermilab on MINOS, another long-baseline experiment, which uses a detector at Fermilab, at the source of the neutrinos, and another 450 miles away, in northern Minnesota.

“Each of these projects lasts years, but our involvement happens in small bursts,” says Trudeau. “Actual scanning usually only takes about a week, then a month or so of modeling back in the office. Then, back a few months later for more scanning/modeling. It’s not a set schedule.” Exact Metrology performed the majority of its contract work for Fermilab in Batavia on the Main Injector.

Follow-up work will be ongoing.

“I think that at this point we have hit all of the main areas that concerns or interests them, but at any point there may be another area that comes up, and we will most likely scan that,” Trudeau predicts.

The ultimate goal, he points out, is to get the entire facility 3D-scanned and modeled so that they can have as-builds of all the equipment. “My guess is that we will participate in a few more projects, and then eventually they will have enough justification to purchase their own equipment and have their metrology department take over doing those measurements themselves.”

Fermilab will continue to contract out most of the mine surveying work. The part that deals with the Fermilab site has been delayed for now in favor of the detector construction, says Friedsam.

“When time comes for that part, we will make sporadic use of contractors to support our effort on the tunnel infrastructure. It is one thing to perform laser scans for that purpose. However, the majority of the time on scan data is spent on the post-processing and our group currently does not have the man-power to do that.” 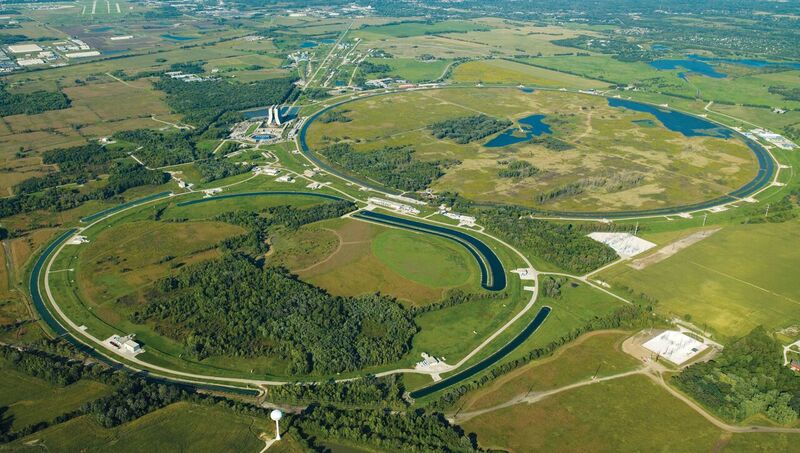 To survey the ring tunnel, thousands of control points were shot with laser trackers and confirmed in order to maintain a reliable control network.