With preliminary surveys already starting around the coast of the UK for another round of wind farms being built, the offshore industry descended on the National Oceanographic Centre in Southampton, UK for the bi-annual event, Ocean Business, centered around the offshore survey industry. Luckily, my home is a walk away from the event, so I was more than happy to attend to see what was going on. 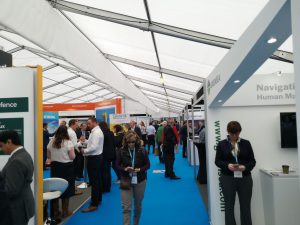 With over 340 exhibitors and over 180 hours of training sessions and demonstrations, Ocean Business 2019 is big, really big, and that is without mentioning the survey vessels that you can jump on for a demo around the Solent or the huge careers event that’s on the floors above.

With so many stands and so many people attending, it is a tight squeeze, but oddly it isn’t awkward in the way that some events make you feel like you are a sardine or that you are desperate to get out for air. No, this is friendly, and you feel like you’re part of a big team; everyone you bump into is happy to say hello, even if you aren’t really one of the offshore survey gang. 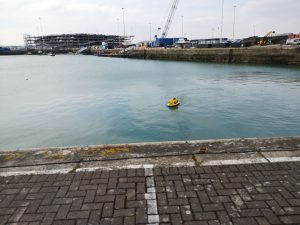 There was plenty to see dockside.

One of the dockside demonstrations that caught my eye was performed by L3, a company based in Porchester, UK. They had designed an unmanned boat, the C-Worker 7, and were showing how it could be used to deploy an ROV in hazardous conditions. Unfortunately, I was unable to get a photo as it was extremely busy but the use case for it is limitless. This could solve many dangerous scenarios where there isn’t the ability to physically get near.

This year there were many ROVs: some with better batteries which can provide longer survey times and some with slightly better cameras or lasers scanners. What was most interesting is the specialization. One example was the Autonaut 3.5 comms hub, a USV specifically designed as a long-duration surface gateway. This clever unmanned surface vessel has lots of flexibility with regard to sensors, which enables tasks such as data harvesting, precision positioning and communications to and from subsea assets, and onward relay via satellite in over the horizon missions. 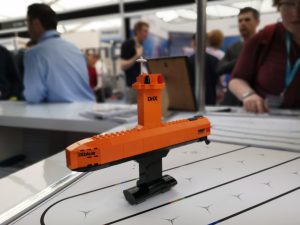 Bibby Hydromap had a Lego Drix.

Another interesting USV was the autonomous DRiX from ixBlue. Although it has been around for a little while, Bibby Hydromap (a survey company in Liverpool, the home of the Beatles) has found its natural home for monitoring and surveying wind farms. This could provide a more efficient way to capture information as part of the ongoing monitoring requirement of a wind farm.

People from 6Alpha, a UXO company based in Bury St Edmonds, UK, were discussing some of the work they had done around offshore wind farms and how they use their ex-military knowledge alongside experience and research to mitigate the danger of unexploded ordnance. But in my conversations they let slip that they are currently finishing a mobile application to help identify potential risk for onshore construction throughout the UK.

Of course, there was a lot more than I could ever relate, but my time got consumed a little by the conference that was also running at the event. One talk by National Oceanographic Centre Head, Helen Snaith, caught my attention: “Seabed 2030 – Building a Global Ocean Map” where the aim is to build a detailed global bathymetric map through international collaboration and partnerships to ensure quality of data and fill gaps. 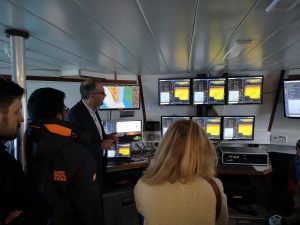 Nortek took me out for a survey of the dock.

Another talk was “Geospatial Verification in BP” which focused on verification ownership, data-type, data-location, data-lifecycle, and minimum checks conducted, showing BP’s progress in this area, with particular reference to license block, seismic, well, infrastructure, bathymetry and geohazard data. It was fascinating to read how they manage their large amounts of detailed data and how they quantify data.

Overall, Ocean Business proved to be a fantastic event with everything you would need if you were to do anything in the offshore realm, from waterproof sensors, to high-voltage subsea cables, to subsea pulley systems. It fills you with awe seeing how much we can achieve working offshore in all types of conditions. At the same time it fills you with frustration that we aren’t more advanced onshore.

Missing were ways of displaying and analyzing all that amazing offshore data. Maybe I’ll have to take a stand at the next event.