Recognizing the importance of hydrography work being done around the world

It’s June so that means kids are out of school for the summer, parents are dreaming of a little family vacation, and if it’s June 21 it means it is World Hydrog­raphy Day. On November 29, 2005, the United Nations adopted Resolu­tion A/60/30, which “welcomes the adoption by the International Hydrographic Organ­ization (IHO) of the World Hydrography Day with the aim of increasing the coverage of hydrographic information on a global basis.”

This year’s theme is “one hundred years of international cooperation in hydrography,” which is designed to showcase progress in knowledge and technology over the past century and celebrate the groundbreaking work done by all IHO states over this period.

Looking back over the history of hydrography here in the United States it is easy to be impressed by how far we have come. President Thomas Jefferson had big plans for the Survey of the Coast on February 10, 1807, when he signed it into being. Ferdinand Hassler, the first director of the Survey of the Coast, introduced precise geodetic surveying methods never before used in North America.

We did not even have the right equipment to conduct the trigonometric survey. It wasn’t until 1834 when the first hydrographic sounding was recorded. Now we are surveying on a geodetic ellipsoid using numerous types of remote sensing from multibeam sonars to lidar and satellite-derived bathymetry to make our maps. I hope that by 2030, 223 years after that first sounding, that we will have a comprehensive map of the ocean floor within the U.S. Exclusive Economic Zone.

This enthusiasm for past accomplishments is quickly exhausted when you look at what we still have to do here in the United States territorial waters. As I have said in this column before, we have nearly two million square nautical miles (6.8 million square kilometers) of unmapped territorial waters. This is going to require a great amount of coordination and involvement from non-federal entities, more than we have seen to date.

An encouraging development along this line was seen in April of this year when Florida passed a bill that includes a $100 million project run by the Department of Environmental Protection (DEP) to acquire “high-resolution coastal mapping services to provide seafloor data from the coast to the edge of the continental shelf or beyond.” Under the bill, the project would be completed by 2023 and updated every five years.

California executed a similar plan several years ago. We hope that other coastal states follow suit and share their data to update our understanding of the nation’s seafloor.

It will also require unmanned systems to serve as force multipliers to complete this task. Given the area still needing to be surveyed, it would take more than 100 ships surveying around the clock, 365 days a year for the next 10 years to completely survey all the unsurveyed areas of our territorial waters.

However, we are seeing an explosion of new uncrewed system technologies that seek to bring the cost per linear nautical mile down, while increasing the overall rate of coverage. It is this sort of innovation that we will need to be successful.

I would be remiss on the occasion of World Hydrography Day if I did not recognize the IHO’s 100th anniversary. For those unfamiliar with the IHO, it is an international body tasked with establishing world-wide standards for hydrographic data acquisition, nautical cartography, and the education of those engaged in these disciplines.

This is critically important since maritime navigation is by its very nature an international endeavor. Ships need common nautical charts, with common data, regardless of which port they are entering around the world. This body provides these standards with representation from all member states — of which the United States is an active participant.

As the National Hydrographer, World Hydrography Day to me is a celebration of all the dedicated, innovative, and hard working people I have known around the industry for the past 30 years of my career, both inside and outside of government. From our university partners who have helped continually push the boundaries, to our robust private sector of hydrographic surveyors here in the United States, to our deep industrial base developing the sensors needed to do our work – all share a common commitment and belief in the broad value hydrographic data brings to the nation, its science, and its prosperity. 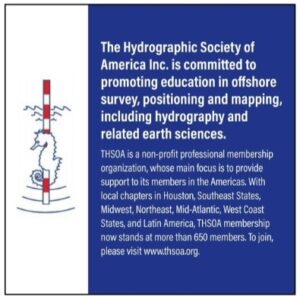 So this June 21st, if you the part of this geospatial community that feels at home doing your job on a boat, or works to support those who do, congratulations because this day is for you! Happy World Hydrography Day.