Above: Using a mobile mapping system, Construction CAD Solutions can generate high-accuracy point cloud data–in multiple views, as shown above and at left–to assist in its utility design function.

The ability to identify, accept, and then embrace new technologies is a hallmark of most successful business enterprises. Companies that refuse to do so are often relegated to the dust heap in favor of those that find better solutions to help them move forward.

When Construction CAD Solutions (CCS), a Chicago-area engineering firm, reached a certain point in their development, they recognized that a move toward a GNSS-based solution could benefit them tremendously, and they made that move. The company has continued that progression, embracing lidar’s strengths in a mobile mapping effort that sets them apart from the competition. Today, the company is one of the area’s most in-demand telecom design houses, has grown to more than 100 employees, and is about to apply the CCS approach on an international scale with work both north and south of the border.

Status quo does not apply here.

A minority-owned company, CCS was started by current CEO Pervis Conway, whose business roots stem from an initial project he did for a Chicago-area customer, handling fiber optic design for electronic toll collection in area toll plazas.

“However, when that company went out of business, I went on my own and started CCS, which, in the early days, I operated out of my apartment as a one-person operation,” he said. “I was fortunate enough to land a contract doing hybrid fiber/coaxial [HFC] engineering work for TCI [acquired by AT&T, now Comcast]. Success with that contract allowed me to staff up, get a dedicated office space, and steadily grow the business to where we are now.” CCS is a design/engineering firm focusing on supporting the fiber optic growth occurring nationwide, but for a time the company delved into the construction and installation side of the industry. Today, maintenance counts for only about 3% of the company’s total business, while the design side shows continued, unabated growth.

While designing fiber optic and HFC networks for various entities is an integral part of the CCS business model, the company has always been good at recognizing the changes happening around them and adding capabilities to meet those needs. According to Marcus Mars, a CCS manager, one of those pivotal points occurred in 2007.

“We were contracted around that time to do some GIS work for ComEd, a huge Chicago-based utility, and knew that our practices for doing so–taking manual measurements and transferring that data to CAD–were not up to the task,” he said. “We also realized that geospatial technology was becoming widely-accepted for that type of work, so we purchased a GNSS receiver. We used that tool to acquire all the data and log all the assets our client needed, resulting in both a successful project and a satisfied customer.”

Mars added that the receiver is still part of CCS’s everyday operation and, in fact, is currently in use gathering GIS information for a large area gas company. “It was definitely a great addition for us,” he said. 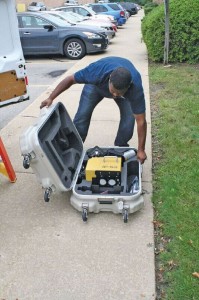 Marcus Mars, CCS manager, readies the IP-S3 for installation on one of the company’s vans.

As time passed, that foray into the geospatial realm made CCS more keenly aware of the potential that existed for help in other applications–areas that included surveying, additional GIS work, and, perhaps most prominently, a push toward incorporation of building information modeling (BIM) practices. Pervis said that ever-increasing push for BIM, coupled with the steady growth of its HFC business, drove them to look for a new, more efficient data-gathering solution.

“A typical project today can include right of ways, easements, any number of permits, specific depths to which underground cable has to be dug, joint asset agreements between power companies, and so on,” said Conway. “And someone has to do the research to determine the best route to get their cable from point A to point B.”

“In the industry, the more times you have to directional bore or drill pipe underground, the more expensive the project gets. So people hire us to design their network in the most cost-effective manner possible, and modeling plays a huge role in that effort–and scores of others as well–today. Because having the most information available to do that is key, we looked into lidar in a mobile mapping configuration as a possible solution.”

After reviewing and testing different approaches to lidar mapping, CCS chose the Topcon IP-S3 mobile mapping system. Mars said, based on the relationship they’d established with Topcon through their GNSS receiver, they again worked through the Topcon Solutions Store in nearby Carol Stream, Illinois.

“We initially looked at the IP-S2,” he said. “However, Topcon advised us that, not only were they getting ready to release the IP-S3 within the year, but the new model would be half the size and weight of the current model. So we waited and we’re glad we did. In an attractive cost range, this fit perfectly.”

The majority of CCS’s current workload focuses on fiber infrastructure for small cell networks and wireless backhaul (from the customer back to the network) design. Many of their projects extend for hundreds of miles, which would tax, if not overwhelm, an army of field technicians.

“That’s where lidar comes into play,” says Mars. “In the past, a 400- to 500-mile out-of-town project would have meant hiring 40 to 50 people just to handle all the survey. Using the IP-S3, we can send out a small workforce to drive the route, gather the information we need, speak with any municipalities that might be affected, bring that information back here, process it, and distribute the finished product back to the client in a very short time frame.”

Recent history has shown that as quickly as the need for mobile mapping becomes apparent, its ability to collect the volume of data needed is instantly appreciated. The IP-S3 used by CCS sends out a laser signal at rates as high as 750,000 times per second, resulting in a geospatially accurate, data-rich, point cloud. For CCS, the inherent value in the instrument is equal parts accuracy and efficiency.

“We did a recent 10-mile project that would have easily taken our field techs two weeks to walk out,” said Mars. “Instead, it took us about two and a half hours to drive, then another day and a half to process and QC it to make sure we captured everything we needed. That was a huge savings.

“But if, for some reason, we did miss something critical to the client’s needs in that report, it’s as simple as bringing the file up, grabbing the data, and getting it to them–much faster, easier, and safer than sending out a crew to re-walk the missing area.”

To further illustrate the point, Mars cited a situation in which a utility might be unsure about the height of a mid-span (between poles). Using the point cloud data gathered in the mobile mapping run, they can easily grab that info.

“As a result of doing so, they might find that they can’t stay aerial and have to go underground,” he added. “Without having to send any- one out there to gather the underground info, we have it at hand. It saves time in all aspects.

“And if there is an area that was missed altogether, or which the client added after the fact, it is still easier to send the vehicle with the IP-S3 out to collect the info, upload it to the cloud, and send it back here where our team can immediately start working on it.”

The overall workflow is a seamless blend of various major software packages, starting with a KML of the proposed route to help the driver determine what info to scan. Once captured, CCS uses Topcon Mobile Master Office visualization processing software, then exports the resultant data to Orbit GT for asset acquisition work, then ports that info into Esri’s ArcGIS and exports it to AutoCAD.

“The result is generally a DWG file that is what most of our clients demand,” said Mars. “From that point, we do whatever we need to do to make it most presentable for the client’s needs and send it off.”

An alternative view from Mobile Master used to base-map the area with existing utilities. The total mapping session for this project covered about 30 miles.

Once primarily a local/regional company, CCS has developed a reputation nationwide for its quality telecom design work, and that reputation is growing exponentially as states and municipalities learn of their capabilities. In addition, the company has begun entering into contract work with companies in Canada and is close to beginning a project in Nicaragua.

“These are exciting times for us,” said Mars. “This new technology is helping us look at new areas and new applications. Down the line, I can see the IP-S3 providing a real benefit to DOTs by providing them with actual views of their highways, thereby eliminating the need to send workers out to take measurements.

“They could have a full, accurate view of an entire prospective project–say, an area that might be slated for resurfacing. And not only will they have data on the road itself, they will also have the roadside, which is often of equal importance. We’ve only begun to touch upon what this technology can do.”

In this view of a 20-mile mapping route, surface utilities and streets were highlighted as part of CCS’s effort to deploy fiber-optic cable.