With the President’s Day holiday recently behind us, a day I refer to as Surveyor’s Day (think Mt. Rushmore) and National Surveyors Week starting on March 18, 2017, I can’t help but think about surveyors across the United States as a whole.

Although my entire professional practice has been in California, over those years I have read and learned much about the practice of professional land surveyors across the country through professional publications, forums, books, and personal conversations. Although there are significant differences across the land, there also seems to be an under-fabric of commonalities, based on my observations. Let’s discuss some of those differences first.

As I said, I have not practiced outside of California, so this list of differences is by no means being portrayed as comprehensive, and possibly not even 100% accurate, but these are my perceptions.

Colonial metes and bounds versus Public Land Survey System states – oh, and Texas & Hawaii:   It is a fact that land boundaries were established in the U.S. in a progression from east to west. The metes and bounds methods, procedures, and practices existed well before the Public Land Survey System (PLSS) was even a gleam in Thomas Jefferson’s eye and when it was first implemented in Ohio in the late 1780s.

The differences in these two systems, including the terminology, are significant, and it seems Colonial state surveyors see the PLSS as a simple “cookie cutter” system where the rules are clearly defined and easily followed. The PLSS surveyors are quick to point out that this is not the case because the rules (BLM Manuals and various special instructions) are applied differently, or not at all, depending on the circumstances. It seems the answer of “it depends” is often applicable to boundary determination, no matter where one practices. Ever heard of the Benson Syndicate?

Texas employs a hybrid system of its own based on Spanish Land Grants and a mutation of the PLSS. Heck, what they call “Field Notes” in Texas does not even mean the same as the term does everywhere else. Leave it to Texans. (I can say that because I am one, having been born in the Big Bend Country city of Alpine, in the shadow of the Davis Mountains.)

Hawaii adopted a native system in place at the time of statehood, which I know very little about, except that I think you need to be able to read Hawaiian to be able to pass the licensing examination and they use south azimuths and no bearings.

And we all know, or should know, what the BLM is proposing for the expansion of the PLSS in Alaska.

There are some exceptions to the PLSS system where it is used, including Spanish and Mexican Land grants and French settlement systems established prior to the deployment of the PLSS (think of Senior Rights). Probably others.

Despite these, and likely many other differences, there are also commonalities, which I will address later.

Recording versus non-recording states:  I personally practice in a recording state, yet there are many unrecorded surveys out there, usually in private records, depicting monuments in the ground that long ago established the boundary between landowners. However, due to the recording requirements, that is where our research starts, in the public records.

If we do not find enough in the record to establish how found monuments were established, we will keep digging until the trail goes cold.  Due diligence research is a requirement for proper boundary surveying, so it is almost impossible for me to fathom how one can meet that requirement in non-recording states? Where do you even start, beyond your own records? When do you stop looking? I imagine working in one of those states highly elevates the adage that “local knowledge is king.”

I have read discussions and debates on this topic and have found it amazing that there are proponents of the non-recording status of the state(s) they practice in. I guess it is a matter of what you are used to, but despite my almost 40 years of experience in land surveying, I fear I would be just groping in the dark attempting to do a proper boundary survey in a non-recording state.

Geographical, geophysical, flora and fauna:  I grouped these together because I consider them the varying factors of the regions where we practice. The weather, terrain, vegetation, level of inhabitance, soil composition (corrosive, stable?), and environmental hazards (plants and animals) all impact the tools and materials we use, the way we use them, when we use them, and how long it will take to perform our work safely.

GNSS doesn’t work well everywhere, even though it seems some try anyway. Some of us have rattlesnake encounter stories, while for others it might be gators, bears, wild hogs, moose, water moccasins, killer bees, Gila monsters, or some combinations thereof. Is it poison oak, ivy, or sumac?

Is the ground under your project significantly moving horizontally and/or vertically relative to the national reference frame and datum? Maybe not even the national system, but the International Great Lakes Datum, which employs dynamic heights, rather than orthometric heights. Is it going up or down? How fast and how far? Do you have tidal datums to deal with? Clearly, we don’t all play on the same playing field.

There are many other notable differences, such as licensing requirements (degree required or not?), continuing education requirements, case law variations, the definition and projections used for State Plane Coordinate systems, and what is defined as the practice of land surveying, or not. To not only be proficient, but hopefully excel as well, one most strive to evolve and adapt to the system and elements in which we work. 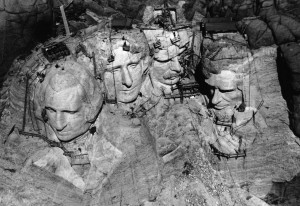 We need to view “those three surveyors” from different angles. They were definitely multi-faceted, just like surveyors across our country. Source: National Parks Service

When all the dust settles, the arguments and debates ebb, and the glasses are raised in professional camaraderie, there are many fundamental commonalities that we all share, many of which are not limited to our nation’s borders, based on my readings. I have written of these things, or at least some of them, in two earlier Field Notes installments:

Other common factors include:

I don’t think that it is a coincidence that I am a professional land surveyor and that I have been told by my wife on more than one occasion that I need a shirt with “I MAY BE WRONG, BUT I’M NEVER IN DOUBT” boldly printed on the front. Maybe I’ll get one for National Surveyors Week!