A Danish surveyor measured the floor area of 13-story building in 1.5 hours with a mobile 3D scanner.

Accurately calculating the floor space area in a new building (either residential or office) has serious legal implications in Denmark, and this service has become important business for surveying companies there. One of these firms, LIFA Surveyors, dramatically reduced the time spent on interior building survey projects from days to hours by switching to indoor mobile 3D laser scanning. 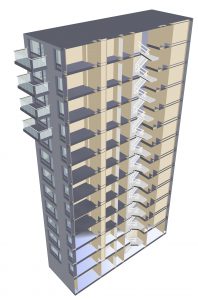 A comprehensive BIM model was generated from the 3D scan data of this condo in Denmark.

“We surveyed an entire 13-story residential building in one-and-a-half hours, with only 30 minutes needed for the actual scanning,” said Nikolaj Miller, LIFA senior charter surveyor. “A couple of years ago, that would have taken us one to two days with manual methods such as measuring tapes.”

The interior area measurements provided to a building owner right after construction are significant for several reasons. Most notably, the owner is required to file this information with the local municipality for tax purposes. And if the building contains rental apartments or office spaces,the owner relies on the unit dimensions to determine lease rates.

The accuracy of unit sizes, however, took on additional importance in the 13-story waterfront building recently surveyed by LIFA. Located in the Danish town of Vejle, the property was designated as a condominium with individual units sold to residents. As is customary in development projects of this type, the owner pre-sold many of the apartments before construction had begun.

Therefore, liability issues were at stake for the owner to certify that each completed apartment contained the promised square meters of floor space before the purchase deals could close, Miller explained.

In Denmark, law requires a survey firm to provide this as-built verification. It is not uncommon for a builder to deviate from the design plan—either on purpose or by oversight—and the change might not be documented unless an official interior survey is made. For example, placement of a wall just a few centimeters out of alignment can alter the area of a room, and the owner of the new building needs to know this and report it for compliance purposes.

LIFA is a multidisciplinary surveying and mapping firm that transitioned several years ago to using terrestrial laser scanners to model facilities for a variety of applications. Two years ago, the Danish firm learned about a technology called SLAM (simultaneous localization and mapping), originally developed for the robotics and unmanned vehicle navigation markets.

After reviewing mobile products for the 3D geospatial mapping market, LIFA selected the ZEB-REVO from GeoSLAM of Nottinghamshire, UK. This handheld laser scanner uses a modification of the traditional SLAM navigation technology and applies it to mobile 3D mapping. Australia’s National Science Agency CSIRO developed the geospatial SLAM algorithms and helped to launch GeoSLAM in 2012.

“SLAM enables ‘go-anywhere’ mobile-mapping technology that’s ideal for indoor mapping,” said Mark Reid, GeoSLAM vice president of product management.“Normally when scanning on the move, you need to use GPS and high-end inertial measurement units (IMU) for positioning. However, this doesn’t work indoors. Our SLAM algorithm is optimized for mapping applications; that allows us to scan while moving without the need for GPS.This makes [it] the perfect tool for rapid indoor and underground surveying.”

LIFA recognized the time-saving benefits of using a mobile scanner instead of a stationary one, especially for indoor projects. The obvious advantage was that the operator could collect data at walking speed without having to stop periodically to set up the terrestrial unit at new fixed locations.

“We use stationary and mobile scanners, depending on the project,” said LIFA’s Miller. “We rely on the ZEB-REVO when we need to collect a lot of detail quickly and provide architects, engineers, and building owners with as-built surveys requiring 5- to 10-centimeter accuracy.”

Having completed numerous projects similar to the Vejle condominium building, LIFA has fine-tuned its procedures to finish the onsite scanning work quickly and efficiently. When he arrived at the property, which was still unfurnished, Miller walked all 13 floors in order to plan his traverse through the building, especially noting the locations of stairways. He also opened all hallway doors into apartments as well as interior doors within each unit.

“Preparation took about an hour,” said Miller, who completed the entire project as a one-person ‘field crew.’ 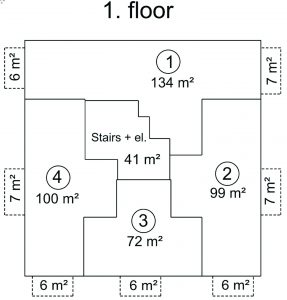 A plan view of the tower’s floor without scan data overlaid. 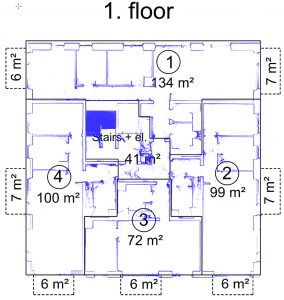 A plan view of the tower’s floor with scan data overlaid.

From a designated starting point on the first floor, he started the scanning phase, carrying the scanning unit in his hand. He walked at normal speed down the hallways and entered each apartment where he looped around the inside, making sure to capture exterior walls and walls separating one unit from the next. (There was no need to scan interior rooms because the objective of this project was to measure the total area of each apartment and not individual rooms inside.)

The 3D mobile scanner was operating continuously as Miller left one apartment, walked down the hall, and entered the next. Scanning continued as he walked up the stairway from one floor to another. 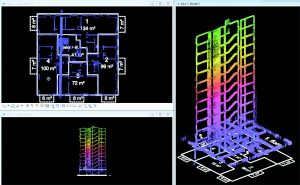 The raw 3D scan data as viewed in Bentley MicroStation.

“We try to plan our routes so there are overlaps in the scans, which improves the quality of the point cloud [when the scans are correlated and tied together],” said Miller.

Throughout the scanning, data was captured and stored in the integrated datalogger which is in a backpack. Total scan time was just 30 minutes for the whole building.

“We captured the entire building in one continuous scan,” said Miller. “Had the building been any larger, we probably would have divided it into two separate scan sessions to keep file sizes manageable.”

Processing Scans in the Cloud

At the time of this project, GeoSLAM offered two methods of processing ZEB-REVO data. Clients could either buy the software and generate the point cloud themselves or upload the data into the cloud where GeoSLAM handled the processing. LIFA chose the latter, which delivered a finished point cloud of the entire building in less than two hours after uploading.

(GeoSLAM now offers real-time functionality—allowing the user to view and process their scan data during the scan itself—using a viewer on a tablet or smartphone.)

LIFA imported the processed 3D point cloud into Bentley MicroStation to create a building information model (BIM). The technicians then used the BIM to take measurements of the apartments and common spaces, such as hallways, and calculate areas of each. During this process, they visually compared the model against the design plan to ensure each wall had been placed where it was supposed to be.

“We could look at the model and see that walls lined up with those in the apartments above and below,” said Miller. “The total internal area of the building was 5,432 square meters divided into 44 apartments, and the overall accuracy of the scanning was within five centimeters.” 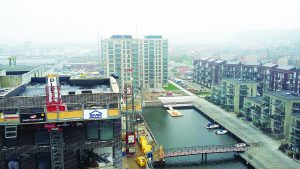 “The scanning revealed no discrepancies in this building [compared to design],” said Miller. “If there had been, we would have flagged them for the owner, and we couldn’t have signed off on the project.”

For the Vejle building, LIFA delivered only the final area measurements to the owner because this was all that was required in the scope of work. In many similar projects, however, LIFA also delivers a BIM to the owner.

Increasingly, these 3D models are being incorporated by building owners into facility management software to handle ongoing maintenance and operation of the structure—throughout its entire lifetime.