A visit to one of Topcon’s nationwide Roadshow 2018 stops showed why these events are popular among customers and local dealers and how they provide valuable feedback for product teams.

“The thing I hear most from our customers at the roadshows is, ‘I did not know that,’” said Collin McCoy, equipment sales manager at the PPI Group, a regional Topcon dealer in the Pacific Northwest. “They come here and see equipment in action and see that something like their Z-beam laser might work for other equipment in their fleet or that they did not know that they could do grade control on another [type of equipment] with a total station – lots of things like that. We get so many ‘I did not know thats.'”

I spoke with Collin, his colleagues, and some corporate folks running the event at the Kent Washington stop on 2018’s schedule of the Topcon Roadshows. This stop is about halfway through the schedule of several dozen stops across North America. A list of stops is at  topconroadshows.com. A previous visit to a Roadshow event in Vancouver B.C. inspired the writing of our September 2015 cover story, The Digital Site. 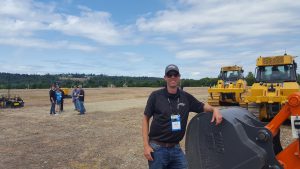 Collin McCoy of The PPI Group (local host of the Topcon Roadshow stops in Kent WA and Portland OR) says that the thing most said by customer who attend these events is “I did not know that.”

I asked McCoy how many roadshows Portland Precision Instruments (the PPI Group) had participated in. “This is our second [PPI] roadshow event this year: one at our Portland [Oregon] office and one here [for their Kent, Washington office]. Prior to that we have had one at each location for three years running.

“Since Topcon introduced the semi-truck [the centerpiece of the Roadshow displays and amenities at each site], then we took things on the road.”

The first time I saw the roadshow trailer was three years ago at the 2015 Vancouver BC event; it has displays inside and guided tours of all the various equipment, plus demonstrations of the connected software suites – some including data from heavy equipment running live at a roadshow site.

McCoy said, “Prior to that we had done our own versions of the roadshow geared a bit more towards contractors and stick time [hands-on training for heavy equipment operators]. Now the roadshow also includes survey, construction – all the technologies that Topcon offers.”

This was the first day of the two scheduled days at the Kent stop. Customer turnout appeared to be quite strong, with some customers travelling from across WA and adjoining states. Displays and demos run all-day, and the roadshows are known for some great lunch fare at each stop – a popular local food truck catered this one.

McCoy commented on the advantages of roadshows for the dealers. “The manufacturers and dealers like it as it does, of course, drive some sales. But we also get a lot of positive feedback from our customers. They enjoy the experience, being out here away from their busy projects, coming out to have a little fun, see the equipment in action, try operating some of it, and to help better understand how it works.”

I had to ask: What if instead there was a great big national show?

“That would be CONEXPO,” said McCoy. “It is a great show and is important for folks to attend, but still it is a trade show: static machines, video loops, etc. With the roadshow the idea is to get folks out there trying out equipment and gear, punching buttons, getting some hands-on experiences. I would not be opposed to something like a big sandbox where we can all go and play, but these local shows are great because it is connecting us with our direct customers. When I go to something like [a big international trade show], it is difficult, like a needle in a haystack. I end up spending half my time talking to customers from the other side of the country, and that is good for feedback, and we’re helping that customer, but in this atmosphere  I’m helping my customers and I’m their dealer –  it’s a bit more personal.

These events are put on for the customers, and the ones I talked to all gave positive reviews of this event and the idea of roadshows in general. Maurice Piersol, owner of Piersol Construction, took time from his busy schedule juggling multiple construction sites in and around his company base in Spokane Washington to attend; and he brought some of his team with him. Piersol, a long-time customer of certain Topcon products, said this was his first time attending a roadshow. 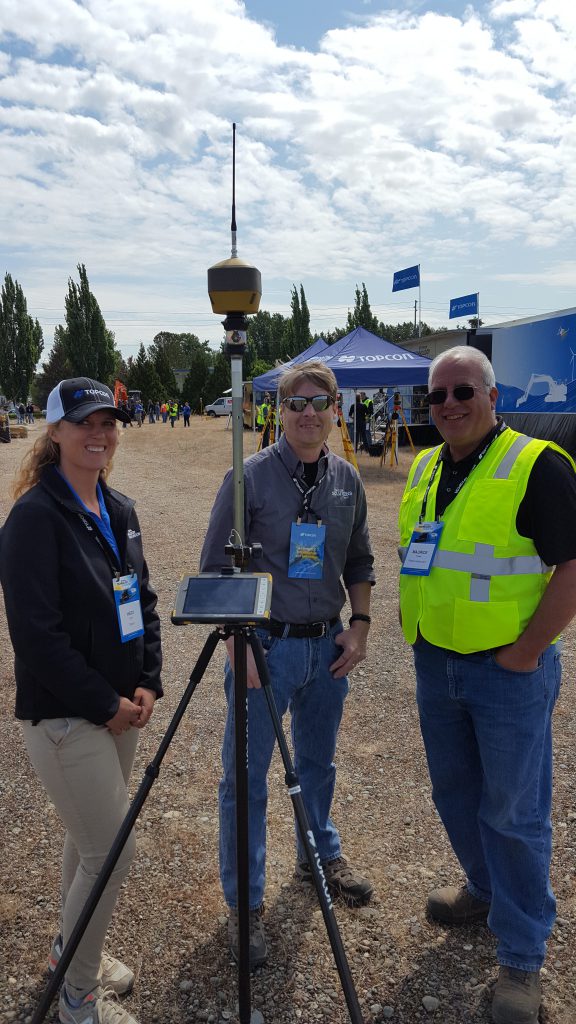 From left to right: Heidi Oviatt, Curtis Huggins. and Maurice Piersol. Direct (and frank) feedback from customers and one-on-one conversations with the dealers and Topcon team is a feature of the roadshows.

“Definitely this is good,” said Piersol. “It is more one-on-one talking to the Topcon people, and I am getting a lot of answers here, like [about] those five pieces of equipment over there.” He motioned to some of the heavy equipment on display in the adjoining field. Piersol noted that he has already adopted several of the systems on display and wanted to ask direct questions about and see a demonstration of a different one that he was considering. Piersol said he had attended some large conferences and that he’d rather see better pricing on gear than on what gets spent on those huge bashes.

The feedback to the Topcon crew was very frank; Piersol related that there had been challenges to the integration of one solution years before, but the conversation was not in the tone of a complaint – more as constructive dialogue. This was a key takeaway for me: I sense that the roadshows foster such direct feedback with the local and regional reps who would be on the front line in supporting the users and in channeling such feedback to the development team.

Attendees always look for what is new or cool in the respective lines of equipment, software, and hardware. One display drawing a lot of attention was the concrete finishing system from Ligchine: the Screedsaver Max with the demonstrated configuration using Topcon components for elements of control. Watch our FB vid.

Another was a small dozer using a prism and Topcon GT total station to control the height of the blade, and attendees were encouraged to drive it. Jesse Hornbuckle of PPI, who was facilitating the test drives, took the risk of letting this old surveyor operate it. I fumbled a bit on backing it up, but otherwise the run went smoothly and the blade cut a smooth and level path. Watch our FB vid. The operator drives the dozer, but the total station guides the blade to match a design model. Hornbuckle also took out a carpenter’s level to show how well this dozer, and that of a larger grader also on display, had worked. 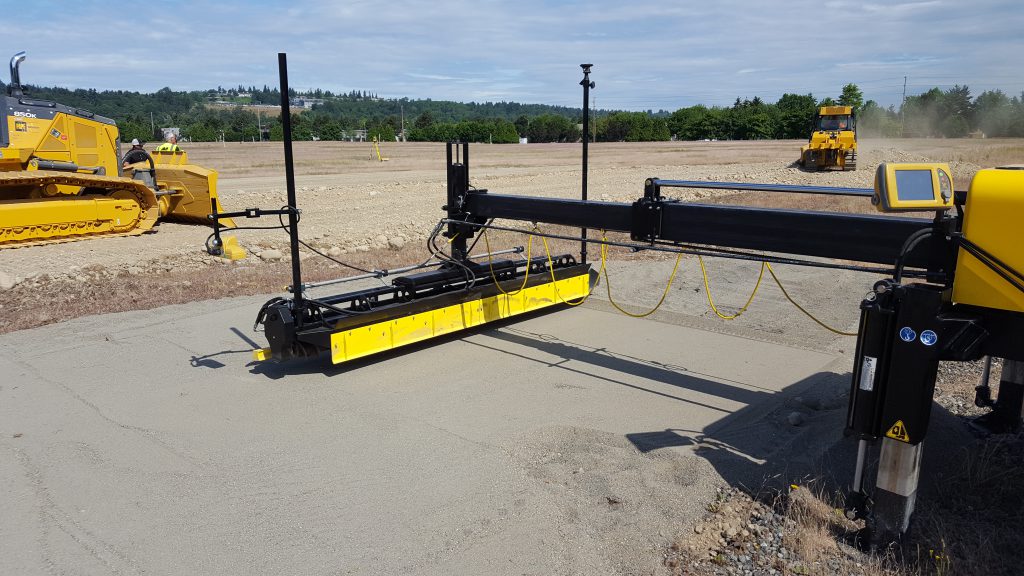 The Ligchine Screedsaver Max with Topcon control components was popular demo at the event. 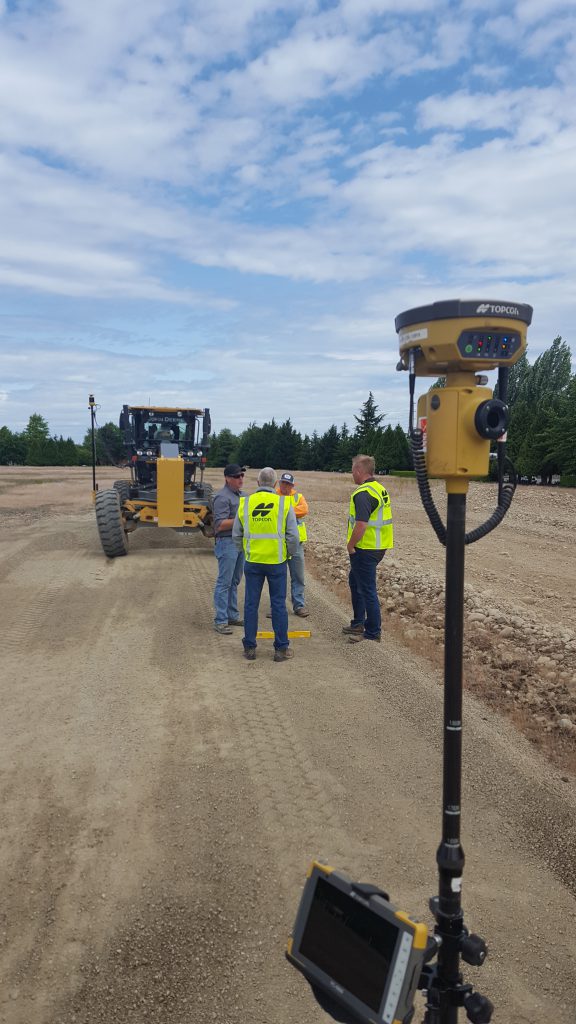 Jesse Hornbuckle (left) of the PPI Group, with three customers, checks the level of the demo grading with a carpenters level. The GNSS rover in the foreground features a Z-beam receiver (e.g. Millimeter System) under the GNSS head.

On the survey equipment side, I asked Heidi Oviatt, Western Regional Sales Manager for Topcon, what is new and what survey items were popular. “In a few weeks, MAGNET 5.0 is coming out, and we are expecting hundreds of new or updated features.” Curtis Huggins, an application engineer with PPI added, “We hear that there will probably be more customization options for the [tool menus], more stakeout options for staking directly form the map screen, and a lot of other features.” He notes these updates come from user feedback.

Oviatt said, “The GT total station is doing very well.  We launched this two years ago, along with MAGNET 4.0, the FC5000 [controller], and the HR [GNSS rover] at the same time.” These were announced as a suite in 2016, and xyHt did a write-up of our test drives at that time. Huggins gave a demo of integrated surveying using the HR and the GT in MAGNET. Watch our FB vid.

As heavy civil and vertical construction continues on a path to more automation and barriers are removed from workflows by further integrating hardware, software, data, and operations (what gets called “constructioneering”), the roadshows are including more of such solutions.

I stopped in the Roadshow trailer (air conditioned) and took in one demonstration of a solution for managing and tracking site and project assets, like heavy equipment, and instruments. You might know that some of the Topcon and Sokkia survey instruments come with an option for T-Shield: on-board telemetry to remotely track, manage, diagnose, and support the instruments (and presumably to be able to locate stolen gear). The same core elements are also available for heavy equipment, powered and non-powered assets.

Tom Remy, senior manager aftermarket Tierra Remote asset management, gave me an overview of the Tierra solution. There are two main modules: one for powered assets (that have their own source for electricity to power the device) like heavy equipment, haul trucks, and vehicles. “It is waterproof, shockproof and a three-wire install,” said Remy. “You can pressure wash it, steam clean it – very durable. There is a trigger wire off the alternator to get true engine hours, something you do not get with just an odometer.”  A built-in cellular device can send the default one location ping per day or if it is moving each hour and a ping when it stops. You can also get other info like engine hours to help schedule maintenance. 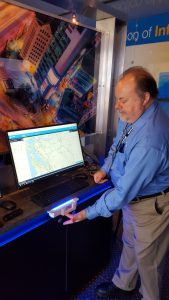 Topcon’s Tom Remy demonstrating the Tierra asset tracking interface and the battery powered module that can be mounted under trailers and other non-powered assets. There is also a module for powered assets.

“You can view all of this in one web application; it shows where all of the equipment is located, and you can click to get additional data and a full history,” said Remy. He said the powered device is under $400, and the monthly fee of $19 for the data connectivity. Another device is for non-powered assets like trailers, or portable signs; for this there is a battery-powered device that costs under $250 and has a $10 per month fee for connectivity. The battery lasts seven years (if only doing a single daily ping) or about half that if doing the more frequent pings if moving a lot.

In past interviews with Topcon Positioning’s CEO Ray O’Connor, and in a recent joint interview with O’Connor and Topcon CEO Satoshi (Steve) Hirano, the subject of the roadshow approach to reach customers — as opposed to giant user conferences – was discussed. Topcon has a strong preference for the roadshows: don’t bring the customers to a big centralized event, bring the exhibition to the customers. The interview with O’Connor and Hirano will be in our August 2018 issue and will include a profile of two Topcon factories we recently visited Japan.

I can see strengths in both approaches. But I’d have to say that this recent day in a big field with all the activity, and the full line of gear to learn about – and try out – had me reflecting on many things I learned while there and thinking: “I did not know that.” Plus, I got to try out a new dozer and had a blast doing so. 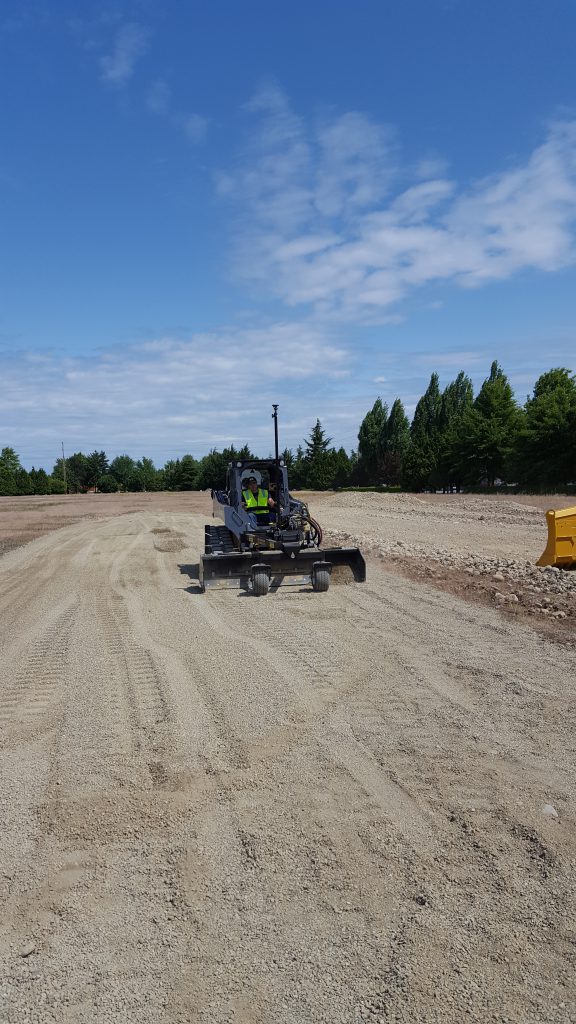 Event attendees got to try out heavy equipment like this small dozer, with blade control from a Gt total station. They even let me drive it (and I didn’t damage anything… phew!)