What do you think of all this new technology? Do you love it? Do you fear it?  Does it keep advancing faster than you can keep up?  In our industries, new technology usually means change.  We will probably need to learn something new to make this new thing work.  That’s a good thing, right?  Supposedly, we will be able to work faster and more efficiently.

So, why can it be so frustrating?  I have seen surveyors brilliantly invent new swear words in a fit of rage at a new piece of equipment. The job site is then quarantined and deemed “absolutely unsafe for children” due to all the violence and language being thrown around. And at the heart of all this hatred: a humble little GPS unit just trying to make your life a little easier.

Most of the time these frustrations are just part of the learning process. Nothing is wrong with the unit.  Time and interaction will make anyone an expert.  To me, just knowing that there is always a solution to a problem makes the experience fun and challenging. Allow me to share such an experience; try to imagine what you would have done in this scenario.

The project was to map a tunnel with a laser scanner.  I was traversing with the scanner, which means to set up over a known point, look back at a target on another known point, then shoot a new point to where I want to move next. 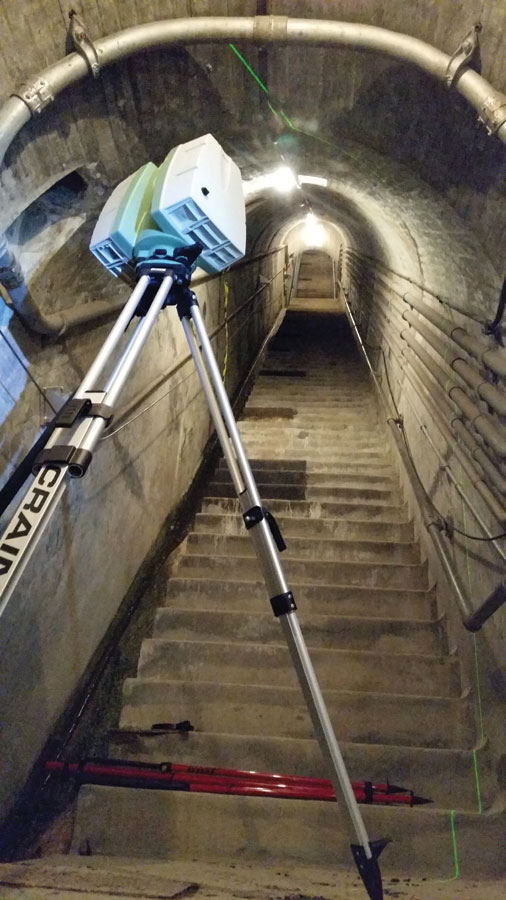 Things were going smoothly as I made my way up the tunnel.  At the end of the tunnel were stairs.  No problem, Ill just traverse up the stairs stopping on each of the landings.

That is until I get near the top and the stairs start to get steeper. Very steeper.  Steep as in the steps were taller than they were deep.  You could climb them like a ladder.

At two landings from the top the scanner gave an error; it could not shoot the backsight target.  I could see the target right there on the screen but it would not shoot.  I hauled the scanner back down to the last landing thinking I’d messed up somehow.

After redoing the setup and hauling everything back up, still the same thing—it would not shoot. I was stuck. Absolutely stuck.

What can you do if you can’t shoot your backsight?  I had a whole ton of work to do at the top of the stairs so I needed to bring control up there.

Here were my options:

After I convinced myself to stay and do #3, I started by looking at the source. Why would the scanner not scan the target?  Is it a glitch in the machine?  I doubt it, because it has been running fine all day.  So what else could it be?

Wait, can’t the scanner see down only at a certain angle? That’s right! I must be trying to look down at an angle too steep for the scanner.  Awesome!  Now I can come up with a solution.

First, I tried raising the target as high as it could go—still too low.  I couldn’t reach the ceiling because it was too high, so no putting control up there.  So, now I’m stuck again, back to square one.

What would you have done in this situation?  What would your solution be?  The answer can be found in the next edition of xyHt.  Thanks for playing.

This is what I did: I shot the next occupy point (132) onto the landing ahead.  I then shot a point further ahead past 132 as far as I could see up the stairs (133).  Then I set up on 132 and backsighted 133, which was up the stairs ahead of me.  I did the same thing on the final landing.  Once at the top of the stairs I could continue on like normal and complete the project.

Here is the point of me sharing my embarrassment. The technology most likely is not your problem.  It may have limitations, but that is why we keep with us the most powerful machine of them all: our brains!