Editor’s Note: The following paper is focused on the surveying and mapping of archaeological sites, but also examines a dilemma that surveyors face in nearly all of their work; balancing the highest possible positional quality with affordability and practicality. In an adaptation of their academic paper, Aleksey Korotya and Evgeniy Osadchiy present how they evaluated and tested various technologies for the study of historical fortifications that have featured so prominently in the rich cultural heritage of their home region in north eastern Ukraine.Geomatics and GIS technologies and their outcomes are widely used among archaeologists in the countries of Western Europe and the USA. The application of highly accurate devices allows them to establish the exact size and configurations of the surrounding terrain. In some cases, the use of even one total station or GPS device can enable one to answer questions concerning the location and measurement of complex sites such as fortresses, battle fields and burial structures. In Ukraine such technologies are only starting to be applied, and widespread adoption is often faces financial complications. Through close partnerships with Western European and North American scientific foundations, Ukrainian research institutes conduct studies concerned with cartographic recording of archaeological monuments. Combined usage of several geomatics tools and resources, such as mapping grade GPS recorders and satellite imagery, is one way this is conducted. The margin for error that occurs during such work is entirely within workable limits. This complex method was developed and used by the authors for the study of border fortresses built by Muscovy (outposts of the Tsarist rule of the region) and Rzeczpospolita (traditional name of the Polish State) during the middle 17th century. [1] What’s necessary for further studies are a complete site survey and the creation of a topographic plan of the site, landscape features, and the positioning of the cultural layers are necessary. They are needed for researchers to visualise the fortification and for further precise mapping of excavated areas of the site. We offer our analysis of tools, resources and methods for the surveying and mapping of these and other archaeological sites of this nature. 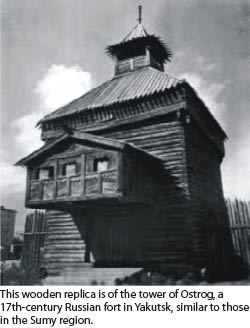