W.C. Croft owned and ran several businesses in his lifetime, from an industrial pump company to an enterprise that provided the lights for the Jefferson Memorial in Washington, D.C. But the one with a special place in his heart was SURV-KAP LLC, based in Tucson, Arizona, producing monuments and other products for surveyors.As the firm recently celebrated four decades in business and marches toward continued success, the owners look back at the man who was their inspiration.  “He always called it a cute little business,” SURV-KAP president John Baffert says of his late father-in-law who, in 1986, purchased the business that was founded in 1972. Baffert is married to Croft’s daughter, Helen Croft Holliday.  “I had told her one of my dreams was to work for [her] father.” That dream materialized in 2004 when he joined the company.Baffert said Croft was “a wonderful mentor, very personable. When he visited his company he didn’t just grab a cup of coffee and sit down in the office. He’d walk around and greet everybody by name. He was famous for always asking, ‘Do you have any problems you’d like me to help with?’”As to his decision to buy a business distant from his Chicago home and rooted in the surveying profession, Baffert says Croft “had an engineering background; he was a very technical man,” so it was a natural fit.He says his father-in-law served on many boards during his career and was also a member of the Chicago Crime Commission and the Illinois State GOP Committee, having photographs of himself with presidents Richard Nixon, Gerald Ford, and Ronald Reagan. Croft was aboard the USS California during the attack on Pearl Harbor where “he saw many of his men give up their lives.”Croft was fond of horses (Baffert says, “He reminded me of John Wayne”) and was thrilled that his son-in-law’s cousin, Bob Baffert, was a famous horse trainer. 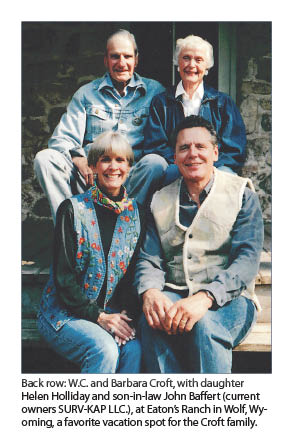 In 2010 Baffert and Holliday bought SURV-KAP, which Baffert describes as “more of a national company, basically the U.S. and Canada, although we have had a few clients around the world.” Holliday, who has a master’s degree in education and was a teacher, became hands-on with the company about a year ago.“We work very well together,” says her husband, whose initial career was in counseling. “She has brought a lot of energy and enthusiasm and has a heart as big as Texas.”Including the management team, there are 10 employees. “We have one employee who has been with us 25 years, and our newest employee has been with us seven years,” Baffert says, making the business seem like a family.SURV-KAP also seems like family to customer Lou Mingolo Jr., of Mingolo Precision, Hackensack, New Jersey, where he is the third generation at his company, which has also logged four decades in business. “I’ve had dealings with them for 15 or 20 years, and I think customer service is their strength, how well the client is treated—whether it’s having a simple question you want answered to placing an order.” Mingolo says he is always familiar with the person on the other end of the phone. “It gets to be like a family thing … anyone else probably has the same product, but it’s customer service” that makes a difference with them.Mingolo recalls a time when “we needed brass cap markers at the last minute; the situation was rare, we try to plan ahead, but there we were. There’s a few hours’ time difference between us, but they didn’t say they couldn’t do it; it was not an issue, just we’ll do it. We got it next day air and everyone was happy. ‘I’m going to find a way’ is their answer, not, ‘we can’t do it.’”John Armstrong, who is in the purchasing department of the Maricopa County, Arizona Department of Transportation, agrees, saying “I can call, fax, or email and I always get back a response.”At Prestfeldt Surveyors in Sheridan, Wyoming, Tom Tucker, who has been a surveyor for 35 years, says, “We do a lot of specialized stamping, and they get it right … and there is always a nice follow up” to make sure we are satisfied.Baffert is, of course, pleased by the feedback from customers. “It may sound like a slogan from TV, but we’ve had people say, ‘You’re treating us like we have a million-dollar order.’” 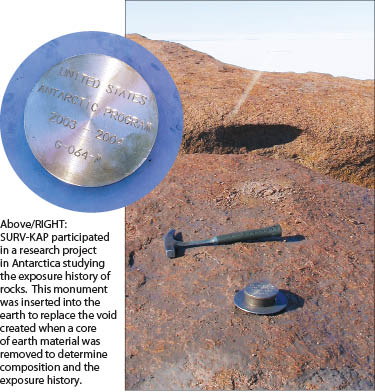 In addition to supplying private companies and departments of transportation, the company is called in on special projects, one of which was in the Antarctic. Baffert explains, “We are very proud that specifically designed SURV-KAP monuments were used in conjunction with the U.S. Antarctic program during the 2003-2004 season. The monuments were used to identify, date, and mitigate core drill holes used during the sampling phase of a research project.” The objective of the project “was to provide a new and improved method of dating the exposure history of rocks and landforms by measuring the cosmically produced argon-38 they contain. In order to calibrate the production rate of this cosmogenic isotope of argon, researchers collected surface and core samples of rock from the Dry Valleys of Antarctica,” he says. “Samples from this region were most likely to contain cosmogenic argon because the Dry Valleys have the slowest erosion rate on Earth, and the surfaces there consequently have the longest known exposure history.“At the end of the project, SURV-KAP was acknowledged by Kim B. Knight, geological researcher from the University of California, Berkeley at the time, and also the on-site geological researcher of the project, for demonstration of monument-building expertise, prompt response, and willingness to work through some rather unusual design specifications, including the navigation of rigorous environmental regulations. All of which made it possible on very short notice for the project to be successfully completed,” Baffert says.In addition to the Antarctic, the company’s monuments can be found in the Cayman Islands, Guam, Europe, and Australia.

Despite economic downturns and their impact on the surveying industry, Baffert is optimistic about the future. “We have implemented stricter quality control standards and improved safety standards to ensure the safety and well-being of our customers and our team,” he says.  “Despite economic changes over the years, SURV-KAP has remained stable by drawing from a national and international clientele base of surveyors … We’re using older equipment, but we’re not old fashioned. “We don’t believe in a lot of debt,” Baffert says. “We want to grow the business in a very conservative manner” with a continued emphasis on satisfied employees and customers, which sounds like something his father-in-law might have said.