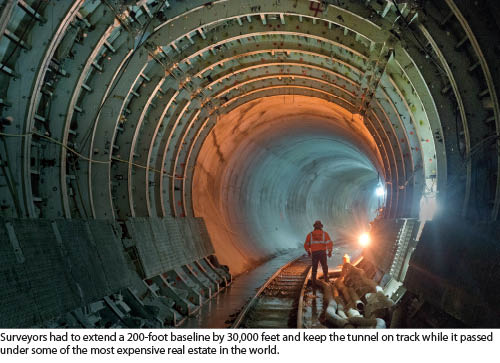 Control surveys for long tunnels may be the most nerve-wracking job in surveying; tunnel surveyors must work from short baselines and extend control for miles, with no ties to surface monumentation and no possibility of obtaining a GPS or astronomical fix. Because tunnels are narrow, even carefully constructed traverses are based on triangles with long legs of 1,000 feet or more and short legs that are a bit less than tunnel width—maybe 15 to 20 feet. And, of course, the stakes are high—when a tunnel gets off course, making things right will certainly be expensive and difficult … and may well be impossible.It’s a job stress that James Skura knows well. A longtime tunnel surveyor and survey superintendent for the Dragados/Judlau joint venture, Skura recently wrapped up work on one of the world’s longest and most complex tunnel systems as part of initial work on New York City’s East Side Access—the project will eventually connect the Long Island Rail Road (LIRR) to a new East Side station now being built below Grand Central Terminal. 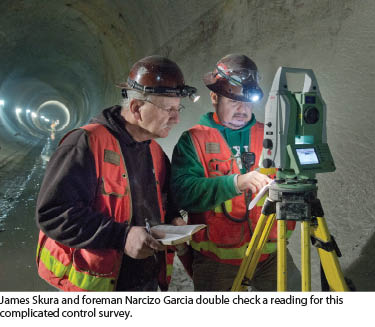 “In terms of difficulty and size, this project is a 10 in both categories, certainly the biggest and most complex tunnel project now happening in the United States,” Skura says, “You’d have to look to something like the Chunnel (linking England and France beneath the Strait of Dover) to find a good comparison.”The numbers are eye-popping. Starting from a firm baseline about 200 feet long, Skura and his crews (about 25 surveyors were active on the project) extended control about 30,000 feet from an existing tunnel in Queens under the East River and 2nd Avenue to a huge cavern being constructed beneath Grand Central Terminal. Along the way, an initial two tunnels split into four, then six and then eight, and then they merge back into each other. Skura oversaw guidance of two tunnel boring machines (TBMs, from two different makers, SELI and Robbins), provided construction staking for shotcrete and steel ring tunnel reinforcement, staked out blasting patterns, and guided the work of smaller tunneling machines called road headers. But he did “99%” of the control work himself, and for many months he had no real way of knowing if he was within the planned alignment or dozens of feet off course. So it was a dramatic moment for him when the first TBM reached Grand Central, and he was able to finally check his work. How well did he do? Read on … 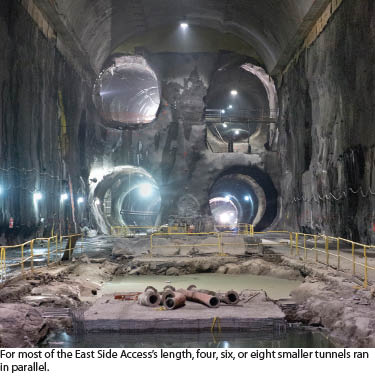 Skura initially used Leica Geosystems’ 1201 robotic total stations (a “one-second gun”) for all traverse work and later switched to Leica’s TS30 (a “half-second gun”) when it became available mid-project. His field procedures were necessarily precise, to the point of tedium. All shots were to prisms on tribrachs or to prisms permanently mounted on tunnel wall control points, and prisms were calibrated regularly. Instruments were moved from tribrach to tribrach for consistency, and all instruments were calibrated each shift (work was around the clock, in three eight-hour shifts, including some Saturdays). Calibrations included temperature and humidity, of course, and barometric pressure. Skura applied a scale factor to compensate for being well below the surface—most work was about 140 feet below Manhattan or the East River.Conditions are difficult underground. Temperatures are cool, consistently around 60º, and lighting is even, if somewhat dim—lights are installed every 50 feet and all workers have headlamps and handheld flashlights. But the sense of isolation can be extreme. The commute from the surface, via elevator and underground train, took about half an hour, and constant TBM noise and rock dust can be unbearable. This is hard on men and instruments. All survey instruments used were sent out regularly to Maine Technical Source, a Leica Service Center, for cleaning and calibration. Skura says, “It’s like sanding drywall in a house; fine dust gets into absolutely everything, and the insides of instruments get filthy.” The work was so regular and specialized that Maine Technical dedicated an employee entirely to tunnel instrument service for the duration of the project. 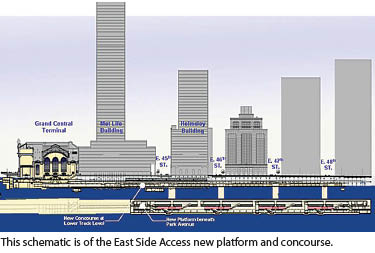 The TBMs were boring 22-foot-diameter tunnels, a standard size for trains. This meant that the short legs of Skura’s traverses were about 15 feet long, with long shots averaging 800 to 1,000 feet. Not ideal of course, but Skura made the most of it with traverses that zigzagged alternately across tunnels and parallel/redundant traverses that checked each other. As tunnels diverged, he also tied together traverses from separate tunnels.And he did have a few ways to check his work, the most important of which was a gyroscope. “The gyro only gives direction,” Skura explains, “but it’s accurate within about five seconds, so at least we were able to check our azimuths on particular sections. That helped to rule out accumulated errors.” Other location technologies used on the site included tilt meters, inclinometers, and inertial guidance systems.Skura performed separate level loops with an automatic level and “old school” Philly rods (he believes the old wooden rods are more accurate than fiberglass) which gave him a separate check on vertical angles derived from total station work. “We do bench runs of 3,000-4,000 feet, out and back, and on the way back we check in with control point elevation values established by total stations. Basically, it’s a way to discover screw-ups. Fortunately, we always checked in closely.”As a final mid-project check on his work, Skura contracted with a separate firm, Towill Inc., to run independent traverses. “They’re specialists and very experienced—they were my insurance policy,” Skura says. “They came in three times, brought in surface control on their own, ran their own traverses, and checked my points. Their work definitely made me feel more secure.”Of course, all the checking and rechecking in the world couldn’t erase the simple mathematics of what was being attempted—extend a 200-foot baseline by 30,000 feet, and keep a tunnel on track while it passed under some of the world’s most expensive real estate. There were months of work with no surface check and continual anxiety about making contact with the Grand Central cavern. Listening to Skura, it sounds a little like the work of navigators in the Age of Sail, trying to predict trans-ocean landfalls—and avoid shipwreck—based on nothing but dead reckoning and latitudinal observations. 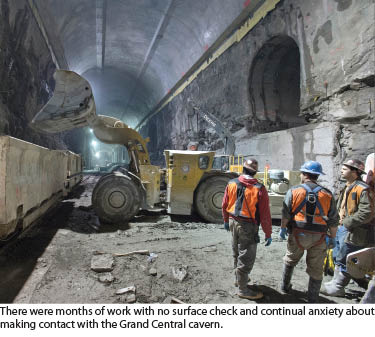 All the work invested in accurate location would be useless if it weren’t accurately and constantly transmitted to the project’s two TBMs, which progress by approximately 50 feet per day. For the East Side Access project, guidance was provided by a PPS (a German firm) TBM guidance system, which is based on an inclinometer, a Leica Geosystems 1800 total station hung from a track, and two prisms, one of which is motorized. From the company’s website: “Two prisms are installed in the forward section of the TBM to measure location and driving direction, and a two-axis inclinometer measures roll and pitch. The prisms are continuously monitored by a wall-mounted motorized theodolite, which automatically references the system computer against predetermined coordinates. The theodolite, which may be positioned 25-300 meters behind the TBM, periodically measures the stability of its own mounting by referencing a remote prism and notifies the operator of any movement. Horizontal and vertical deviation, and TBM orientation, is presented to the operator graphically. A projected path display can be provided to guide a deviated TBM back to the design centerline.”The upshot is that Skura’s carefully derived coordinates were automatically projected forward along the plan alignment by the PPS system, and TBM operators could see, more or less instantly, how the TBM’s course compared to plan. Alignment information was relayed to a monitor, which operators used to steer the TBM … if ‘steer’ is the right word for changing the direction of a 600+ ton machine moving about 50 feet per day. Tolerances for the alignment were rather tight, about one inch, but because the tunnel was “overbored” (bored larger than plan minimums) by three inches, the continually applied locational guidance was more than sufficient to keep the TBMs on track—over 30,000 feet, the completed tunnels never vary from the plan alignment.

Skura explains the results of the check after breakthrough: “It was a long process, and in the end it was just beautiful. I couldn’t believe how well we checked in.” In fact, the traverse closure was nothing short of amazing. One of the two main traverses was within nine hundredths of a foot, and the other was within six hundredths. In nautical terms, a very satisfying landfall, Mr. Skura.The East Side Access project is expected to be fully operational in 2019 and will make a big difference for commuters in Long Island and Manhattan. During peak morning hours, 24 LIRR trains will arrive at the new station beneath Grand Central Terminal every hour, for an average of 162,000 daily passenger trips. Travel to John F. Kennedy International from Manhattan’s East Side will also be greatly simplified. It’s an expensive project—estimated costs have risen from $3 billion in 1998 to, currently, $8.4 billion—and timelines are long. But the millions who begin to use the extended LIRR later this decade will be very happy to be arriving at work on time and getting home at the end of the day. If they happen to glance out the window as they pass under the East River, they won’t be thinking about all the careful survey work that made their safe passage possible; they’ll likely be thinking about dinner, or their families, or meeting friends, or any of a billion other personal matters.Unless, perhaps, they’re surveyors. Then maybe they’ll take a moment to think about the amazing work done down in the tunnel, 140 feet below the surface, and appreciate the beauty of a job well done.