This was my directive from the PSM editorial team: “There are great stories at Optech; go find them.” I have enjoyed writing for professional association and trade publications for many years, but this was my first “correspondent” gig for PSM. 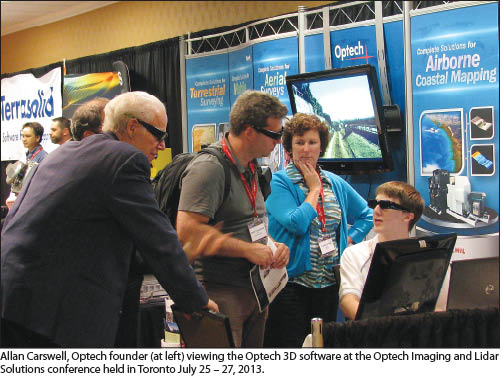 Lidar is all the rage these days. I knew that Optech’s Imaging and Lidar Solutions Conference (ILSC 2013) would be a rich source of technology stories.  The last 10 or 15 years have changed the face of surveying and mapping forever.  The art of measuring is now very much a high-tech industry, but it has not lost roots in precision and attention to detail—the same principles, but now applied to huge amounts of data.  The stories are more about algorithms and processing prowess than pure surveyor, raw-bone tenacity.  The next generation is “Avatar.”  The last generation is “Gone with the Wind.”  It is a new age, and I was on a mission for the new stories.During the keynote address, I was indulged with descriptions of two key trends in digital imaging, CCD to CMOS and Image Fusion.  The image fusion discussion included the trend of collecting more layers of data.  By incorporating the more traditional data (in the visible range) with the data in either direction on the electromagnetic spectrum (longer wavelengths such as infrared and the shorter wavelengths such as x-ray), it is now possible to offer more information in a single view.  The new Xbox Kinect was presented as an example of a true fusion device, especially since its use of active IR allows the user to observe in 3D regardless of the lighting conditions.There was far too much technological coolness to absorb at all at once; I gathered my notes and made a quick list of topics and trends highlighted at the conference, any of which would make a full article (as some might):

After the keynote, I was pleased to find that my press pass gave me an opportunity to have a private interview with CEO Donald Carswell.  He explained how Optech’s mission is, in part, “to solve problems as they are presented,” and how “the company was literally built by solving the questions of the users.”  He talked about how one of the most important next phases of the industry is not just in the collection of data, but in “the ability to get rid of the unwanted data.”  Another of his biggest concerns was with the awareness of specifications.  “The industry,” he believes, “needs to continue to educate both the users and end users as to the true specifications and the honest applications of these newer technologies and the projects they serve.”At the end of our interview, Don asked, “Have you seen our 3D software?”  He then took me to the Optech booth and introduced me to the Optech 3D Virtual software.  It was an amazing example of computer vision—a 3D vision designed to accept any lidar data. With “Men in Black”-style 3D glasses, the lidar popped from the screen.  “You can perform Virtual Surveying or inquiries into the data, such as dimensional checks,” Don said, and then he left me there with his high school intern who was gracefully showing me around this new and beautiful world, this immersive reality. “A new story,” I thought. “This is my story.” 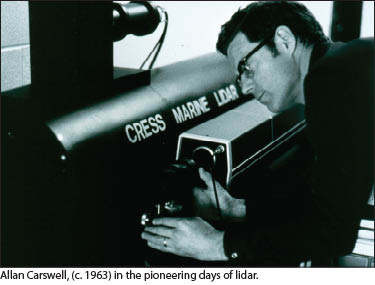 “Wow, this is amazing,” said a tall man with white wavy hair. I immediately recognized him as Dr. Allan Carswell, chairman of the board and founder of Optech.  Obviously inspired and delighted with the buzz of technology around him, Allan began describing his first lidar system in 1961 that produced “a pulse every six seconds, and now they can collect thousands” (some lidar systems are now reaching a million shots per second).  He seemed as fascinated with the technology today as he was in its infancy.Here, in front of me in person, was my story, a tall man with wavy white hair who carries in him the legacy of lidar, the Optech Origins.  Because he’s a pioneer in the field, we should all pause to recognize and thank him.  Our world, our present and future, are all beautifully built on the shoulders of such great men.Dr. Carswell is a Fellow of the Royal Society of Canada and a Fellow of the Canadian Aeronautics and Space Institute.  Among too many things to list, he also served as co-investigator of the MAD DAWG lidar instrument accepted by NASA for inclusion in the original 2003 Mars lander mission.  He serves as a Canadian co-investigator on the Mars Phoenix Science Team for the MET instruments. He stood in front of me as excited as the high school intern, the light of his eyes still pulsing, still collecting data at an amazing rate. There were many great stories at Optech, all beautifully built on the shoulders of giants.  Dr. Allan Carswell, we thank you.