An enterprising surveyor completes her master’s degree online while surveying for the U.S. government in Afghanistan.On the Saturday morning before Christmas, students at Texas A&M University in Corpus Christi marched across a stage in caps and gowns to collect their diplomas, but it was business as usual for graduate Teresa Smithson, working as a civilian contractor at Kandahar Air Field in Afghanistan for CH2M Hill. In a phone interview that day, Smithson said with a chuckle that “it’s just another day on the funny farm,” and she acknowledged that she didn’t even so much as hum a few bars of “Pomp and Circumstance.” Instead she was content to wait for her diploma to arrive in the mail.While Smithson, outgoing with a front-and-center sense of humor, can make light of missing a ceremony, she is a serious example of what hard work and a commitment to her profession can accomplish. A news release from the university about her graduation noted, for instance, that many students have to work while going to school, “but they usually don’t have to worry about bombs going off or terrorists attacking them on the way to class. But that is the life of Teresa Smithson, who completed her entire Geospatial Surveying Engineering master’s degree online” from Afghanistan. The 55-year-old surveyor, also a wife, mother, and grandmother whose family lives in Colorado, told the university, “We have had mortars directly hit our compound and shred several of the housing units, including the room of one of my surveyors. A few months ago we were all told to stay indoors because there was a ground attack against the camp, and several insurgents were on the base.” As a civilian contractor, she works on land surveys in parts of southern and western Afghanistan, supporting military efforts to close various camps as the U.S. prepares to leave. She lives in what looks like a 20-foot shipping container with a doorway on the end. “Some of these 63-square-foot rooms are shared by two people; I have the luxury of living alone in one,” she said.Hailing from Washington, D.C., with a stint in New Orleans, Smithson has spent three years in Afghanistan, preceded by four years in Baghdad, Iraq. Living and working in dangerous places is something she puts into perspective. She told university officials, “hazards are everywhere. You probably drive everyday on the freeway that goes through Corpus Christi without thinking about how dangerous it is. In February more than 200 people had died on Texas highways in just six weeks, more than died in all the camps in Afghanistan during that period.” 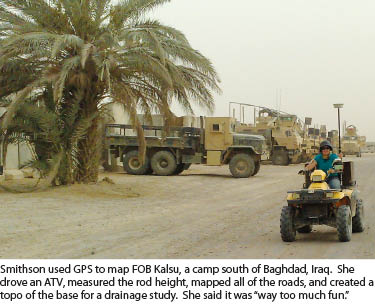 Actually, she said, a bigger obstacle to earning her degree than potential physical danger was having enough bandwidth for internet. “Luckily, professors provided a link to downloadable versions of lectures. I would start downloads when I went to bed and watch them when I had time.”  With a job that required 84 hours a week, Smithson found herself doing class work over lunch or late at night. The time difference also could be a problem, on occasion, with Kandahar 10½ hours ahead of Corpus Christi time.“One entire class lecture was nine different YouTube videos. You could pause and make notes,” she said. There was also an online discussion board for professors and students to pose questions and respond, and every two weeks she had to submit a critical review of a professional article. “Each professor will do things differently,” she said, adding that one of the few drawbacks to learning online is “you lose stimulating conversation and hashing out things face to face.”The degree she earned is the Geospatial Surveying Engineering Masters of Science, a program that “provides students with knowledge and skills focusing on the research, design, development, and use of technologies in geospatial surveying engineering,” according to the university. Smithson told them that, “It is difficult finding an online geospatial program that includes the land surveying component. Most of the programs are only geographic information systems and remote sensing, but the Texas A&M-Corpus Christi’s program had the land surveying component I was looking for.” 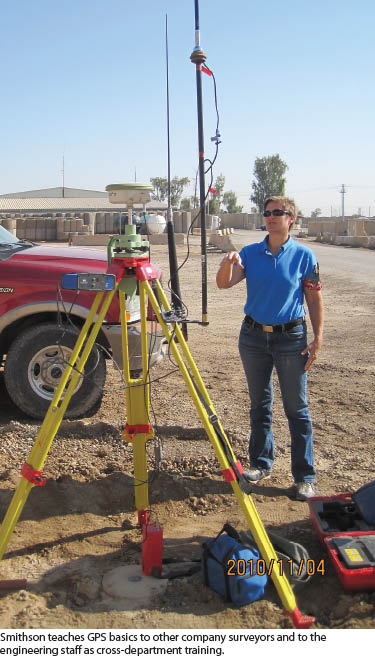 Smithson’s thesis for her degree program was an on-the-job project involving GIS: mapping the military base that is contained within six square miles and has 6,500 buildings “that move” as well as 25,000 people. “We’re actually a city,” she said. “We had 25,000 to 30,000 assets we had to track.” Adding to the challenge were troops moving in and out and issues such as street names or building numbers being changed by new personnel. “We went ahead and mapped and included the information all in GIS. Searching and finding things is now easier. Now you put in a building number and you know what generator is there.” “People think of GIS as a big capital investment, says Smithson. “I’m saying it doesn’t have to be a big investment.” Even for short-run projects, GIS can cut costs.”  During the process she said she appreciated that much of what she was learning could immediately be applied to her work, “which reinforced the education.” Additionally, “we taught classes to 30 people” so they would be up to speed with the new mapping.”

Smithson wasn’t always a land surveyor. “I was in the accounting field. I like math, I like numbers, but I hate desk work. I like being outside.” She earned a bachelor’s degree in accounting and finance, then in 1996 enrolled at Westwood College, Denver Campus. “I had never even met a surveyor until I went to school,” Smithson said. “I figured it was a good way to start a new career, and I’ve never looked back.”During the first summer following her new pathway, she worked for the federal Bureau of Land Management. “We chased snowmelt and did mining claims where we saw no people. It was less money, too, nine bucks an hour… I paid my dues,” traipsing through the backwoods. In 2001, she attended grad school at the Colorado School of Mines, taking evening classes in environmental engineering for her first master’s degree. She became a licensed professional surveyor in 2003.Smithson’s quest for knowledge also fell in line with a passion to see the world. “I had my first baby at 19,” she said, and with her children grown it was time to do the things she had put off. In the past seven years, she has visited more than 20 countries, and she seeks to lengthen the list. She said that during one of her twice-yearly visits back home, “I gave a talk at my local high school, and I had pictures from all the places I’ve been” as well as countless stories of her experiences. “This is what the occupation has given me.”

“Not a Dying Field”

What Smithson has given the profession is a sense of optimism. “This is not a dying field,” she said, not as long as people seek to reinvent how things are done, starting with expanded education. “A lot of people got into surveying through a summer job, and I’m starting to rethink the four-year degree requirement,” now being in favor of it because of such aspects as the availability of internships through the schools and the expansion of online teaching.“We’re not tapes and transits anymore; we’re no longer 10-person teams” where a starting surveyor could be influenced in his or her career by the seasoned veterans. “Now it may be one person with a GPS, and you lose the mentoring, which is big; it’s the reason we’re losing surveyors.”Smithson said that surveying can still be exciting”—especially when she starts talking about those 20-plus countries. “It’s not just ending up in a mom-and-pop shop, although there are some who like that, but for some young people they need to see that, if you are a go-getter and want to see the world, surveying is pretty universal, and it can take you anywhere. You can go to Nigeria and survey the ocean for oil exploration or join the push by Google to map the world.”

Smithson is quick to credit her husband, Aaron Schiff, for her ability to have the career she cherishes. “He is a saint. He’s my number one fan; he’s a nurturer; he’s been my editor.” Schiff works as a land appraiser for the Colorado Department of Transportation, and Smithson said, “We complement each other.” The couple talks twice a day by phone, and when she’s home on R&R they take trips, the next one planned for Panama in March with her husband and grandson.Her assignment in Afghanistan will draw to a close this year, and she says, “We’ll figure out what’s next, but don’t put me in an office. I’m hoping to continue someplace overseas, maybe business development or as a project consultant, anything with travel.”Smithson’s November 2011 article in this magazine about her work in Afghanistan expresses a sentiment that continues to resonate with her. “I came here for the adventure,” she wrote. “I stuck with it through a bad start for the money. I stay because I love my job. And one aspect I especially love is being able to evolve in my role as a surveyor.”