Hey! You out there—heads up! NAVD88 will be DOA22… before you know it!

Refinements in the ability to measure gravity and, with those refinements, the subsequent gravity surveys across much of the United States over the past 120 years have allowed scientists to continually improve the resolution of the geoid and surveyors’ ability to measure orthometric heights. Today’s advancement in measuring techniques—largely afforded through the Global Navigation Satellite System (GNSS) and the unprecedented ability to measure gravity on the ground, from the air and outer space—will allow the geoid’s resolution to be vastly enhanced.To give you an idea of the improvements in measuring gravity being made from outer space where the effects of the Earth’s gravity field are the weakest to measure, the Gravity field and steady-state Ocean Circulation Explorer (GOCE) satellite platform launched by the European Space Agency in March, 2009 is measuring gravity’s effect to within 1 part in 10 billion! One scientist likened 1 in 10 billion as being able to measure the change of mass of a super tanker from an added single snowflake.Closer to Earth, gravity measurements made using airborne equipment further refine gravity’s image. Such improved resolutions in going from outer space to airborne data could be viewed as being analogous to going from a thumbnail image to a high-resolution photograph. Terrestrial-based gravity measurements are even more focused but are very point specific. Lacing these three types of datasets will provide the best overview of the Earth’s gravity field.The current gravity surveys being completed by the National Geodetic Survey (NGS) through its Gravity for the Redefinition of the American Vertical Datum (GRAV-D) project will tie satellite and terrestrial gravity datasets together from newly acquired airborne data to produce, for the first time ever, a consistent continental-scale geoid baseline. How does that translate into measurable terms for Joe surveyor?Prepare to have your mind blown: The goal as outlined by NGS is to be able to determine orthometric heights with GNSS observations within 2 – 4 cm virtually anywhere in the country at the 95% confidence level.  For the first time all the areas of the United States, including the island communities, will share the same vertical reference frame.  In addition, the new geopotential reference frame will be compatible with a similar effort being implemented by the Canadian Geodetic Survey, called the Canadian Geodetic Vertical Datum of 2013 (CGVD2013) and scheduled to be released in late 2013.But educating the so-called user community of the benefits of a new vertical reference system that will be realized by an entirely gravimetric geoid model will be the easy part. Educating the law makers and policy makers at both the federal and state levels to embrace the new height system by the time (2022?) it becomes available from NGS will be an entirely different matter—if it’s even possible.

Gorillas in the Room

The National Flood Insurance Act of 1968, its amendments, and the subsequent National Flood Insurance Program managed by the Federal Emergency Management Agency (FEMA) still have yet to fully reflect the abandonment of the National Geodetic Vertical Datum of 1929 (NGVD29) and the resolute adoption of today’s current North American Vertical Datum of 1988 (NGVD88). Flood Insurance Rate Maps, their associated Flood Studies, and the Base Flood Elevations, if determined, based on NGVD29 are predicated upon a vertical datum from more than 83 years ago. In so many ways this is more astonishing than discerning the added mass of the snow flake on the super tanker.  In addition, heights in the island areas of the United States, including Hawaii, American Samoa, Guam, Northern Marianas, Puerto Rico and the Virgin Islands, are referenced to their own local vertical datums that are not related to either NGVD29 or NAVD88.Changes in the Earth’s climate and the associated increasing intensity and frequency of climatological events (such as the rise of sea levels and significant flooding events in recent years like hurricanes Katrina and Sandy) serve only to underscore the need to repair previous height systems based on poor, inconsistent, and missing data. Thanks to NGS and the GRAV-D surveys currently underway, the technological challenges in defining the nation’s next height system are being met. What remains yet unseen are how the societal challenges associated with that new height system’s adoption can be in place by the time it arrives.In addition to FEMA, state and federal departments of transportation need to begin as early as possible in promulgating policies and procedures for the adoption of the new height system upon its arrival.Since 2008, NGS has been conducting airborne gravity surveys. The illustration at the far left shows an overview of the areas that have been completed, what is presently being targeted for completion in fiscal year 2012, and the anticipated areas to be surveyed in FY 2013. In addition to these airborne surveys and their associated terrestrially based control (absolute gravity stations and GPS control stations at each airport central to the airborne gravity surveys), NGS is also conducting rigorous geoid slope validation surveys in selected locations designed to independently corroborate its geoid determinations within 1cm. Yowzers!

Onboard a Northeast Gravity Survey

After a glitch with the airborne gravimeter had been ironed out—something that required the troubled TAGS (Turnkey Airborne Gravity System) unit to be sent back to the manufacturer and another installed in a different plane—the gravity surveys for the Northeast got underway reliably in mid-July 2012. Numerous flights aboard a twin engine Beechcraft King Air for Blocks EN06 and EN07 were based out of Bangor, Maine. On Saturday, August 4, I was fortunate to be aboard one flight and got to see NGS geodetic surveyor “Master Clamper” Justin Dahlberg in action. The illustration above details our flight lines that morning, both of which were cross lines or cross tracks. The primary flight lines spaced at 10km intervals are also shown.The day earlier had been our original date for these two lines, but, because of icing conditions toward the New Hampshire end of these lines at the target elevation of 20,000 feet, that morning’s flight was scrubbed. Bill Waickman (at that time the only other airborne gravity surveyor working for NGS; recently he passed away) went out later Friday afternoon on the primary flight lines that extend southerly beyond the Gulf of Maine.In the photo above, Justin performs pre-flight still readings after the TAGS unit had warmed to operating temperature and had quieted gravity readings, usually about an hour after having been turned on for the day. In the intervening time, three nearby ground control dual frequency GPS receivers were each turned on to begin collecting data for later post processing with the onboard GPS TAGS data.In the photo below, after all of the necessary setups and pre-flight measurements had been completed for Friday morning’s flight, the decision to scrub it is discussed due to icing conditions around the New Hampshire-Maine boundary. Standing with Jason is Navy pilot Lt. Mario Singletary. Aircraft commander Lt. Joe Sweger and project manager and NGS Survey Section B chief Dr. Vicki Childers decide to revisit the planned flight lines and the associated icing conditions in a couple of hours. While the aircraft was perfectly able to adapt to the inclement conditions, the hyper-sensitivity of TAGS unit would pick up its effects as the pilots made the necessary corrections in speed and attitude, rendering the data collected undesirable or worse.Not all of the TAGS instrument pre-flight readings are easily observed from in front of its computer screen. In the above photo, Justin is using his cell phone to photograph the one reading that’s directly on the gravimeter itself and is a little too difficult to be seen in the cramped quarters of the plane.All of the pre-flight instrument readings taken were repeated after the survey, the plane was positioned in the exact same location, and the plane was given time to once again find a quiet state.The Earth’s gravity field is something not quickly or easily visualized, but for surveyors who are familiar with airborne lidar surveys and the rendered surface of the ground that results from this type of broadly acquired data, it will be easy to see the similarities in the process of data collection afforded through GRAV-D surveys. The monumental difference is, however, the scale of the NGS survey because coverage in strips 10km wide one at a time are laid across the entire country, and all done by so few individuals. 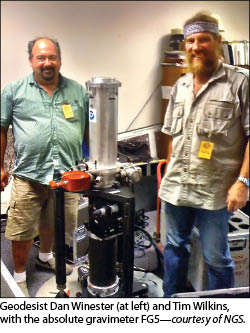 Friday, late morning, the decision was made to scrub the original plans of flying the cross lines after seeing that the icing conditions over western Maine remained unabated. Once that decision was final, plans quickly switched to flying along the primary flight lines of Block EN06. In the photo below,  NGS surveyors Bill and Justin linger in their makeshift office in the conference room of the airport just moments before takeoff.Above, Justin awaits, minutes after takeoff, for the plane to reach its targeted altitude and the first line of the survey. In addition to dutifully noting events during the flight into the flight log for every survey, the airborne gravity surveyor must pay close attention to the TAGS unit, when to release and when to clamp the weighted beam that is at the heart of this type of gravimeter, shown simplistically in the illustration at top, right. In-flight events (from the otherwise innocuous to suddenly having to alter course) and their time of occurrence were noted in the log that later enabled processing of the data and, moreover, its quality to be carefully evaluated. To be certain, the NGS GRAV-D surveys are team events that require thoughtful planning well before any wheels leave the tarmac. Tim Wilkins, sometimes referred to as the NGS GRAV-D recon guy, had arrived in May for the Bangor-based surveys, scouting out existing control stations and establishing new ones around the airfield. In addition to terrestrial-based GPS observations, Tim also made precise observations at control points using the Mico-g LaCoste A10, an absolute gravity meter, establishing a reference basis for the TAGS’ relative gravity measurements.Completion of the GRAV-D program and computation of the subsequent geoid model that will define the new vertical datum is one of the most significant efforts currently being managed by NGS and lead by a world-class team of scientist and geodetic surveyors.  This cutting-edge program will not only provide the United States with a nationally consistent and highly accurate reference frame but also will demonstrate global leadership in the field of height determination through GNSS.