Construction on England’s new seaport requires rapid response to a multitude of surveying needs. Here’s how one surveyor is able to handle the load.

Thanks to a massive offshore operation that includes a dredger sucking up sand and silt from the Thames riverbed, a parcel of new land has been created on the north bank of the Thames Estuary 40 km (25 mi) east of central London. It’s on this new land that the United Kingdom’s first 21st-century major deep-sea container port—and Europe’s largest logistics park—is currently being built. Owned and operated by DP World, London Gateway is a brownfield development that will create a completely new, state-of-the-art facility for shipping and distribution. With a projected cost of £1.5 billion (US $2.35 billion), the new port will feature six berths and the capability to handle ultra large container ships. These massive ships can carry over 14,000 twenty-foot equivalent units (TEU) of containerized cargo (a TEU represents the volume and dimensions of a single standard 20-foot shipping container). The port and newly dredged river channel will offer the terminal infrastructure that the immense vessels demand, including channel and berth depth, bridge height, quay crane height and boom length, and inland and terminal logistics networks. The new port will dramatically increase the container handling capability of the Port of London and is projected to attract new businesses and jobs to its modern logistics and distribution facilities. London Gateway will use a multi-modal approach to connect deep-water shipping to the UK via smaller ships, rail, and roads. 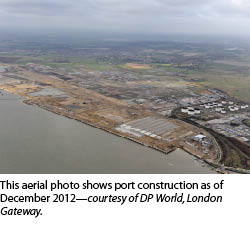 Looking after London Gateway’s land and engineering survey requirements on the inland “park side” of the site is Mark Humphrey of Land and Satellite Surveys (L&SS). The primary focus on the park side of the site is to prepare the area for roads, rail, and buildings. L&SS is contracted to support the many divisions of London Gateway. On a daily basis Humphrey can undertake anything from setting-out and volumetric surveys to as-built surveys or preparing CAD drawings and machine control models.Faced with the need to be mobile and ready to work at short notice on any part of the 2-km-long (1.2-mi) site, Humphrey elected to carry just one survey instrument—a Trimble R10 GNSS system. By using the GNSS system with either a local RTK base station or the local Trimble VRS network for RTK corrections, Humphrey gained the versatility, accuracy, and reliability he needed for the array of tasks he performs. He has used Trimble VRS for all the project’s high-accuracy work including control, checking, and verifying other contractors’ control. The L&SS base station—one of six on the site—is used for machine control.

While part of the project will be built on the new land, much of it will be built on reclaimed salt marshes. In this area, the existing site needed to be raised by 2 m (6 ft) throughout in order to lift it above the flood plain. The required fill material has been taken either from an old refinery site on the project or from the river during the dredging process. In both cases, a large part of Humphrey’s work involves volumetric surveys.  It’s a dynamic site, and delays are costly. As Humphrey moves around a stockpile (each volume survey typically calls for 1,000 points or more), the size of the stockpile sometimes interferes with the radio link to the base station. When this occurs, the R10 GNSS system with Trimble xFill technology can kick in automatically to “fill in” the gaps, allowing him to continue RTK surveying without interruption. Humphrey credits the technology with keeping survey downtime to a minimum.An additional challenge has emerged from the area’s previous life as a Shell oil refinery. Dotted across the 600-hectare (1,500-acre) site are more than 80 old petroleum tank bases, many of which are buried. In each of these bases are anywhere between 600 and 1,500 piles, each with a diameter of 60 cm (2 ft). In preparation for future building piling and construction, L&SS needs to measure and record each pile’s elevation and position to 20 mm (0.06 ft) accuracy.Undeterred by the lack of information on the locations of the tank bases, Humphrey used internet research to discover an old post-war drawing of the refinery. He overlaid this data into his design software and adjusted it to fit an ordnance survey grid. The result was a huge boost to the search for the tank bases, with the new drawing proving to be accurate to within a couple of meters. Concentrating on eight of the tank bases in the most prominent positions, Humphrey needs to operate as quickly as possible. He configured his system to use Trimble SurePoint technology to automatically record a point when the pole is plumb and steady. This approach uses the system’s eBubble, an electronic level sensor that replaces the traditional liquid vial. The eBubble senses the pole position and displays an electronic “bubble” in the field software running on Humphrey’s controller. “The light weight of the R10 means that I can manage it easily with one arm,” Humphrey said. “The eBubble shows me when an accurate measurement is possible. I’m operating on my own, and I now have a free hand to operate the spray paint I need to mark each recorded pile because the point has been recorded automatically for me. This has hugely accelerated what is a long and repetitive task.” Humphrey estimates that this feature has sped up the survey of the piles by more than 30 percent.The site is also challenging in that no up-to-date mapping exists. As a result, it’s not unusual to discover obscure objects, areas of contamination, and unknown pipe work. Using the controller, Humphrey emails coordinates of these “surprises,” along with a photograph taken with the controller’s built-in camera, as soon as he finds them. The rapid information flow allows London Gateway to react quickly and cut downtime that might result from the discoveries.As an “on call” surveyor, Humphrey sees the seamless data flow between himself and the engineers at London Gateway as critical to his work. “I’m here to collect, deliver, and verify data, and I can’t afford to have downtime. London Gateway appreciates a fast service and on all of these jobs, the data I collect need to be reliable and gathered quickly. Sometimes it’s the simple things that really matter. With full days on a site of this size, it’s made it possible for me to move around the area quickly. I can work all day without the normal aches and pains of carrying kit around—definitely a first after a long day of surveying!”The first phase of London Gateway is scheduled to open in the fourth quarter of 2013 with an initial capacity of 1.6 million TEU and will pave the way for 36,000 jobs to be created.