This entry is part 2 of 7 in the series June 2013
Plumb, level, and precise: Surveyors maintain the highest level of positional integrity throughout the surveying and construction of Europe’s unique and striking new skyscraper. 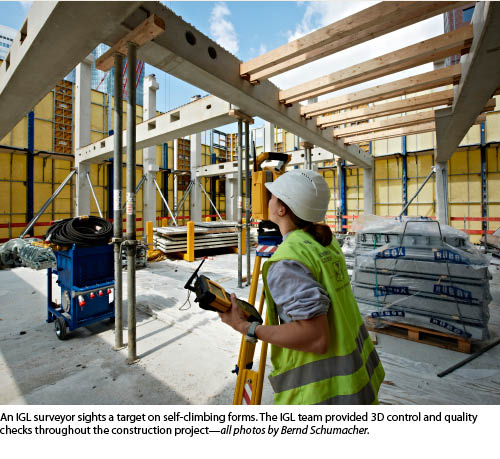 Until quite recently, you might not have seen a lot of European city skylines dominated by shining glass towers, but this is changing. New skyscrapers are rising in such cities as Moscow, Warsaw, Barcelona, London, Paris, and—as one of the financial centers of the EU—Frankfurt. Today, a striking new skyscraper is rapidly emerging in Frankfurt’s crowded financial district, the TaunusTurm (literally “TaunusTower”—Taunus is a mountain range northwest of Frankfurt). It will add to what is the highest skyline in Germany and one of the highest in Europe. Construction work on the TaunusTurm began in 2011; completion is anticipated by the end of 2013. The tight schedule, combined with a restricted delivery zone in the busy financial center, required the use of innovative construction management and technologies.What may not be apparent to surveyors and construction teams who deal with ground-level or low-rise projects is the challenge of transferring the reference framework in 3D in a dynamic environment. The higher the reference framework rose, the more dynamic it can be—there are many stresses and forces in play. The structure has to be monitored constantly for any deformation, and surveyors need to adapt, on the spot, to the design adjustments these measurements would indicate. Frankfurt’s TaunusTurm project demanded complex surveying to meet many other challenging construction specifications and requirements. The urban setting and restricted site access placed severe constraints on construction activities. With very little room onsite, many of the building’s components needed to be installed immediately upon arrival. As a result, the site experienced a continuous flow of trucks carrying concrete and other materials. 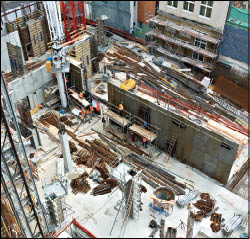 As primary contractor, the global firm Ed. Züblin AG (the market leader in building construction and civil engineering in Germany) oversees all aspects of the building’s construction and has lived up to its reputation for innovative solutions. The complex logistics and demands for the rapid pace of construction posed frequent challenges to Gemmer und Leber mbH (IGL), a German engineering firm specializing in surveying for civil engineering, pipeline construction, hydrography, and other industries. The surveying plan was developed by Willi Almesberger, IGL’s strategic project manager and controller. Almesberger had to familiarize himself with the unique construction requirements and rapid construction pace, while also facilitating flexibility in deploying the surveying teams. For example, the main contractor decided to use components called “PCs Corbels”—adjustable elements that connect floor girders to the concrete load-bearing components. With them it was possible to use self-climbing forms and rapid continuous pours to construct the concrete load-bearing elements and floor supports. The contractor used a special self-climbing formwork consisting of 18 platforms for the building core and another 30 or more formworks for the protective shield. The self-climbing technology works without additional cranes because it climbs independently by means of a hydraulic climbing system. This increased speed of construction placed special demands on the surveying team. “Due to lack of space onsite, prefabricated concrete elements were installed directly from the delivery trucks,” Almesberger said. “This made a multi-shift operation necessary from 6 am to 10 pm, six days per week. In addition, specialized surveying tasks were required to watch for any deformation or unexpected motion of the building under construction.” IGL’s project managers Tina Sängerlaub and Alexander Stein had to coordinate the onsite team of surveying engineers, technicians, assistants, and a construction technician. “In order to meet the project’s survey demands and respond at short notice when required, we created five survey crews,” said Sängerlaub. Surveying equipment included four Trimble S6 robotic total stations with Trimble TSC2 controllers and two Trimble DiNi 07 digital levels. 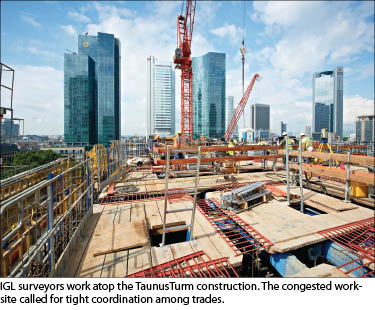 The required accuracy for stakeout points was ±6 mm horizontal/flatness and ±5 mm height. Challenging assignments are not unusual for IGL; the company has used robotic systems for years. “Controlling the total stations remotely via the controller significantly contributed to our fast, efficient measurements,” Sängerlaub said. “Instead of being at the instrument, we could work at a measuring point and quickly make necessary adjustments.” The surveying tasks for the IGL team started with the erection of a geodetic control network of fixed points. It was created by transferring control from the TaunusTurm coordinate system into the building. On the basement floor, positions of 12 points were determined using total stations and analysis software. Plumbing points on the ground floor were set up and established as fixed points within the local construction site coordinate system. With the measurements complete, the surveyors could consider the field of points located on the building’s foundation (concrete slab) as positionally stable. In this manner, they were able to avoid the effect of surveying variations in the geodetic fixed-point field. After that, continuous control surveys were carried out in order to check relative variations between points and to investigate and compensate for significant variations of the points.Extending the local coordinate system to each new floor was necessary during the entire construction progress. Starting from the plumbing points on the ground floor, a surveying party transmitted the horizontal coordinates by means of plumbing onto the respective working level. In addition, openings with a diameter of at least 15 cm (0.5 ft) had to be left in the concrete surface directly through the plumbing points and kept open during further construction progress. The introduction of reference planes every 50 m (160 ft) helped minimize the influence of surveying uncertainties in the progressing construction height. After transmitting the local coordinate system, staking of rising components took place using the total stations. The IGL surveyors marked the building axis and components for prefabricated joists, supports, and walls. In addition, the surveyors had the task to erect 7.655-m-long (25.11-ft) prefabricated supports. When the supports arrived onsite, the team attached reflector foil targets to the support head before the supports were lifted for installation. The foils enabled accurate measurement of the supports as they were installed and checked. The final concrete of the core walls was in place by February 26, 2013. “We were able to beat the client’s deadline by two days [with our advanced surveying],” Almesberger said. “Throughout the project we faced complex surveying tasks that challenged the project management team and every surveyor on site.”In addition to construction surveys, the IGL team at TaunusTurm needed to tackle the additional continuous and complex task of surveying for quality assurance. The quality control surveys, or “as builts,” took place directly after the completion of the respective concrete casting sections and/or after the cores became accessible. Points of interest, such as the corner points of the elevator shafts, were recorded using the total station. Total stations also measured floor height with connection to the height bolts of each respective floor level. Other, long-term surveys were done at specific time intervals. This included positioning surveys of the bottom slab of TaunusTurm used for the reference points outside the building; compressive deformation controls via relative height variation of the building across several floors; and different compression of supports to determine relative height variation between neighboring supports for facade finishing work. The IGL teams conducted this precise leveling using the digital level.The IGL surveying team has played a major role in keeping construction of the new skyscraper on schedule. “The pace of construction in TaunusTurm was an exceptional challenge with high demands on the team and equipment,” says Almesberger. “The surveying requirements were completed with high accuracy, thanks to engineering expertise and the advanced surveying instruments. The robotic total stations accelerated the surveying tasks and were able to save substantial surveying time and costs.” For more information about IGL, visit www.igl-online.de.

Andrea Berlin is a freelance writer in Germany.

A Beautiful and Challenging Design
Referred to by some as Mainhattan due to its skyline and its location on the Main River, Frankfurt is one of the few European cities with a significant number of skyscrapers over 490 feet tall.This construction project consists of the TaunusTurm tower for commercial office space, an additional residential tower, and underground parking for 350 cars. The office tower will be 560 ft high with 40 floors providing about 645,000 sq ft of rentable space out of a gross floor area of approximately 1,100,000 sq ft. The building’s unique shape features six corners, creating particularly attractive office space for tenants. The building has a stunning façade that is created by bright—almost white—natural stone and glass with two-story rectangular windows. A double-sided, symmetrical beveled roof adds to the tower’s striking impression.The 230-ft high residential tower will provide 44 apartments in the highly desirable city center. In contrast to the commercial tower, the residential tower’s facade boasts deep, floor-to-ceiling windows. The two new buildings are set in an existing row of buildings and are harmonious with the historic buildings in the area. Portions of the lower floors will be accessible to the public, such as a restaurant on the first floor. The tower has two separate roof terraces on the 38th floor, and a pedestrian promenade will be developed at the front of the building adjacent to a large park. A design competition for the TaunusTurm project was held in 2000. Architects Gruber + Kleine-Kraneburg submitted the winning design, which was used to secure participants. From the start, the objective was to keep energy consumption and emission very low. TaunusTurm is designed and constructed to attain the U.S. LEED (Leadership in Energy and Environmental Design) Platinum standard, which is the maximum level for resource-saving construction and management. The TaunusTurm project was initiated by the U.S. firm Tishman Speyer and Germany’s Commerz Real