For 60 years, the life work of Erick Schonstedt has been shining though the company and its exemplary instrumentation produced for surveying, geosciences, space exploration, and humanitarian causes.
“MAGNETISM, n.  – Something acting upon a magnet. The definition is condensed from the works of one thousand eminent scientists, who have illuminated the subject with a great white light, to the inexpressible advancement of human knowledge.”  —Ambrose Bierce 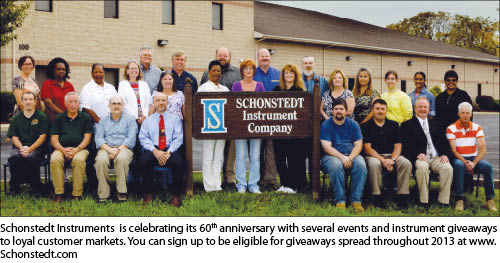 “Bug it,” “wand it,” “stick it”—The act of operating a locator to find a buried monument goes by many vernacular phrases. However, you probably won’t hear the phrase, “Go get the metal detector.” Metal detectors? Those are things retired guys sport around the beach. The surveyor employs much more sophisticated locators, and often the appropriate phrase is “Go grab the Schonstedt.”  Next time you turn on that ubiquitous yellow stick and head out for an exercise in, “I’ll bet this thing squeals exactly where I calculated the monument to be,” consider the six-decade-long scientific legacy that put that “wonder stick” in your hands.The practical application and harnessing of the mysterious force of magnetism has occupied the thoughts and labs of scientists and philosophers alike for several millennia. Carl Frederick Gauss, scientist and mathematician, is credited with establishing the units and convention for expressing measurements of magnetism in 1831 as well as the scientific unit of measure that bears his name. Another mathematical term developed and named after Gauss familiar to surveyors is the Gaussian or normal distribution commonly utilized to express statistical uncertainty in measurement precision. This legacy of pure science brought about a revolution in electro-mechanical practical science, invention, and industrial growth.There are still many new frontiers in the century ahead in the scientific study of magnetism and the development of magnetometric instrumentation, and, like so many other scientific endeavors, surveyors will be among those enjoying the unique and profound benefits.

Erick Schonstedt was born in 1917 in Minneapolis; after attending the University of Minnesota, like so many of the finest graduates of his era, he found himself in the sciences supporting the defense industry. He relocated to the Washington D.C. area in 1941, where he began a series of distinguished postings within the Office of Naval Research. The efforts of dedicated scientists like Erick Schonstedt would shape so much of the science and industry of not only World War II, but also the Cold War, the Space Race, and the rapid industrial growth of post-war America. 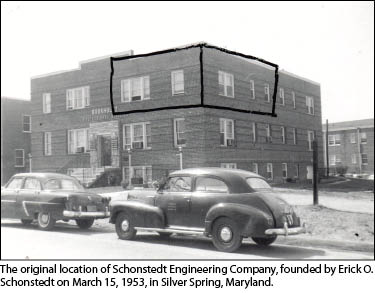 Noted for his work in magnetism, Schonstedt held more than 80 major patents in the field, established the Schonstedt Engineering Company in 1953, and in 1959 developed the breakthrough cylindrical core magnetometer. He participated in many contracts with the defense department, NASA, and other scientific agencies and commercial companies to develop instrumentation that found its way onto satellites studying the Earth’s magnetism, in instruments for detection and surveillance (magnetometers like these are deployed on aircraft to detect submarines), and in metal detectors for airports and secure locations. Magnetometers continue to play a major role in defense, and in many countries the top tier of such instrumentation is regulated and controlled. The science and defense markets provided a decent core for the business, but new markets seemed elusive.A casual conversation with a neighbor looking for his property corners provided the light-bulb moment that set Schonstedt Instrument Company on a path to producing hundreds of thousands of the familiar surveyor’s location tool. The market was relatively limited but solid, and the success of the “yellow box on a stick” cemented the Schonstedt name in the lexicon of surveying. Some have noted that the company was the antithesis of planned obsolescence: The durable instruments last as long as three decades, and the company continues to offer rapid and reliable repair services. The instruments illustrate the buy-once/use-forever model. 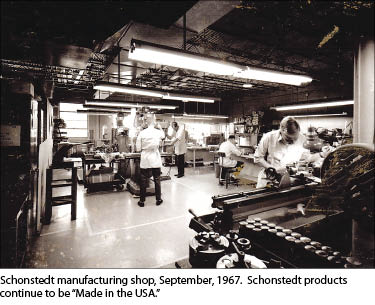 Upon his sudden death in 1993, a childless Schonstedt surprised many by leaving his company to Augustana College in Illinois. This arrangement was viewed by even the school as not conducive for continued growth of the company and development of new products, so an investment group stepped in and brought Schonstedt Instruments to its current configuration as an employee-owned company.  The company continues to reflect attention to fine detail, reliability, and service in the tradition of its namesake.The company has been positioned to continue the fine legacy, but there is no time to sit still; there are new products and markets to forge. The legacy line has been updated with products like the GA-52Cx (still the most sensitive, and still a reliable box on a stick), to the more ruggedized GA-72Cd, and to others with ergonomics and portability included, like the GA-92XTi and GA-92XTd. The company has added to its underground location portfolio systems for cable and pipe location, like the XTpc line and the TraceMaster II. With pipe and cable systems, unique signals are transmitted along the underground features to be detected by the sensitive portable instruments deployed above. 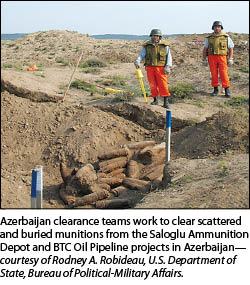 There is more to celebrate than the legacy and success of the business; there is also the humanitarian work done by the company, most notably an initiative to support the detection and demining of warzones, past and present. Schonstedt has been working with the United Nations and international NGOs to get detectors into the hands of skilled and dedicated teams who are working hard to remove these hidden and sinister hazards.The same technology that you have in your “yellow stick” works for mine detection, and indeed Schonstedt has produced instruments for the military as well as civilian demining clients. The popular and rugged GA-72Cd is well suited for detection of unexploded ordnance (UXO) and mines. Schonstedt Instruments has long recognized this connection. “Could we simply do some good in the world by getting our units out there where we know they would save lives?” thought Bob Ebberson, director of Schonstedt’s demining program. He added, “We reached out to the United Nations and asked, ‘Can you help us with this and tell us where these might most be needed, and where landmine clearance might not otherwise be possible?’”  The UN responded, as did the State Department, Quakers, and other groups involved in such initiatives.UNICEF estimates there may be as many as 110 million landmines deployed worldwide, a legacy of conflicts that can remain dangerous for up to a century after the reasons for their placement have long been forgotten. These landmines are manufactured in bulk for as little as a few dollars each and deployed en masse, even aerially by cluster. They account for as many as 800 deaths per month; about a third are children. Simple metal detectors may present more risk than value in demining; sensitive and reliable locators are needed as modern mines can contain very little detectable metal.Schonstedt began a program for which they would match a purchase one-for-one; if someone purchases a locator to donate it for demining, the company adds one more at no cost. To date more than 450 units have been deployed to such war-torn regions as central Asia, Africa, Southeast Asia, and the Balkans. For more on this program, scan here for a short video on Schonstedt’s demining support, and read the feature “Worthy Cause” in the March 2008 issue of this magazine on our website.The dedicated staff of the Schonstedt Instrument Company is committed to carrying this legacy far beyond the company’s 60th anniversary mark—you are invited to join in this celebration by participating in this compelling humanitarian cause.

The Science of MagnetismProbably every surveyor has asked, “What’s the difference between a metal detector and a magnetic locator?” as the latter can be pricier than those hobbyists’ metal detectors. Metal detection, at a cursory level, uses fairly simple principles of electromagnetism that are taught in grade school. A magnet can move electrons along a coil, like a generator, and electrons moving along a coil can move a magnet, like in a motor. The simple hobbyist’s metal detector might consist of two simple coils, one to create a magnetic field and one to detect it; this is an active process. Changes in the received signal indicate magnetic anomalies, like those that a metallic mass nearby might influence.The science of magnetism involves much more detailed measurement, such as the ability to determine direction, intensity, and multiple sources. Scientists wanted to study the Earth’s magnetic field and determine things like the altitude of satellites and spacecraft through magnetometry. The Van Allen radiation belts was discovered with the aid of magnetometers (magnetic locators) on the Explorer-I and -III missions in 1958, and nearly every orbiting satellite launched has included a magnetometer starting with Sputnik 1.  Magnetometers like those that Schonstedt produces work on the principle differences in the magnetic field as detected by two aligned sensors. If there is no ferrous material nearby, the effect of the Earth’s magnetic field should be the same for the two sensors at the same location. But if there is ferrous material nearby, a difference will be detected between the two sensors. This is a passive process, and while it works only to detect ferrous materials, it has advantages over the process used by metal detectors in measuring depth and in avoiding of false signals.