A surveying company in the South Pacific significantly improves crew safety and their deliverables by mapping an open pit nickel mine using a UAV. 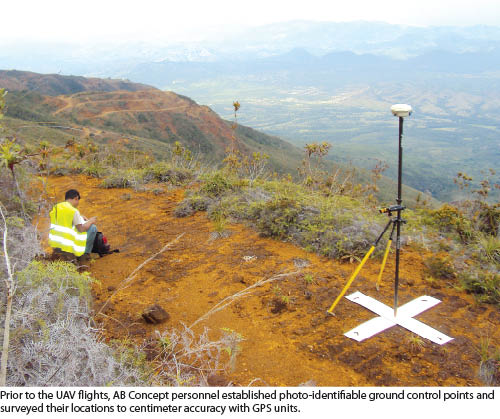 For 140 years, nickel mining has played a critical role in the economy of New Caledonia, an archipelago nation in the South Pacific Ocean. With nearly one quarter of the world’s known nickel resources, New Caledonia relies on the mining of nickel ore and ferronickel as 95% of its exports.The archipelago covers 18,500 square kilometers and is home to 250,000 people. Grande Terre, the main island and by far the largest, is where most of the mining occurs. Historically, the majority of the open pit mining has focused on the mountainous regions at altitudes of 600 to 1200 meters. As smelting techniques have improved, mining has moved down the mountain slopes where the lower-grade ores are found.In modern times, surveying has become an important—although expensive, time-consuming, and sometimes dangerous—part of mining activities on the island. Periodically throughout the year, operators need timely and accurate surveys to optimize their extraction tasks. And good accounting practices require precise mapping of the ore stockpiles prior to transportation from the mine sites. Surveying and mapping products are also considered crucial to environmental protection and conservation. As the mining operations advance lower on the mountains and closer to delicate farm lands and coastal harbors, the New Caledonia government agency that regulates mining (DIMENC) asks for regular delivery of updated maps to closely monitor impact on Grande Terre’s other natural resources.In 2012, AB Concept revolutionized the traditional surveying business on the island. The technical consulting company teamed with SYPOS, a surveying dealer in the region, to introduce unmanned aerial vehicles (UAV) to the local mining industry as a safer, faster, and less expensive alternative to traditional surveying and mapping. The Gatewing X100 UAS used in the first project met or exceeded all expectations.

The Appeal of a UAV

AB Concept provides a variety of topographic survey and mapping services to New Caledonia. The company delivers a full line of mapping capabilities to the entire life cycle of a mining operation from initial exploration and excavation to environmental remediation. For topographic survey projects in and around mines, its crews use traditional GPS/GNSS equipment. Time-consuming by nature, these field surveys take even longer in an active pit mine due to safety considerations when crews work on the notably steep slopes.Normally, survey and mapping companies have access to aircraft from which both imagery and lidar data are collected, ultimately generating planimetrics, orthophotography, digital elevation models (DEM), and volumetric calculations. Mine operators typically request 1:1000- or 1:2000-scale orthophotos for planning purposes in their exploitation areas. Due to the rapidly changing topographic conditions in the mines, surveying and mapping companies face the constant challenge of collecting their raw data, processing it, and delivering end products to mine operators and government regulators before the information is out of date. 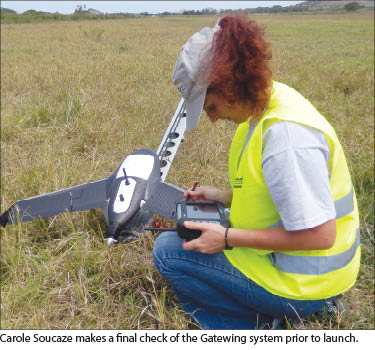 Having purchased GPS/GNSS equipment and other services from SYPOS for several years, AB Concept was intrigued when the dealer became the exclusive distributor of Gatewing UAV systems in the French-speaking islands of the South Pacific, including New Caledonia and French Polynesia. SYPOS sold its first Gatewing X100 UAV system to AB Concept.The system appealed to the consulting firm for several reasons, most notably its all-in-one package, including the aircraft (called the wing), launcher, remote controller, image-processing software, and camera. Operating at a lower altitude than an airplane, the digital camera offers horizontal and vertical photogrammetric accuracies of 5 cm and 10 cm, respectively. And the software is capable of generating multiple mapping products, including orthophotos, digital surface models (DSM), digital terrain models (DTM), and planimetric maps.When comparing UAVs to ground surveys, AB Concept saw crew safety as an immediate benefit because the UAV would fly over the notoriously steep cliffs in the pit mines. Speed was the other anticipated advantage. In good weather, the flights could be completed in a day with the image data downloaded for processing immediately after landing.

Mapping with a UAV

SYPOS and AB Concept worked closely on the first commercial mapping project in New Caledonia at an open pit operation where a valuable nickel ore called garnierite is mined. AB Concept was contracted to map a garnierite mine operation covering 200 hectares (~500 acres), putting it in the category of a medium-sized excavation site. 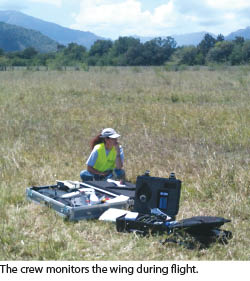 Prior to the flight, personnel from the two companies visited the mine to select take-off and landing points and note vertical flight obstacles. They also sketched out a flight pattern for the UAV to follow in covering the complete site. Field crews then marked and surveyed 11 ground control points throughout the operation. Back in the office, appropriate paperwork was filed with local air traffic control authorities and the mine operator for permission to operate over the mine.Flight planning software was used to create the pattern flown by the UAV. Because the total mine area would be covered in several flights, the software calculated the best pattern of flight lines for each one. Less than a week after receiving the purchase order for the project, the team was on site at the garnierite mine for the first commercial collection. After being launched from a sling-shot-like device on the ground, the wing automatically maneuvered to its correct altitude, 150 meters in this case, and to the start point for its flight plan. From there, the wing became autonomous, flying the programmed pattern and collecting high-resolution imagery as planned. The Gatewing craft covered about 100 hectares (~250 acres) per flight and accomplished the three flights needed to map the entire mine site.The wing returned to its designated landing point after each flight. Data was downloaded from the onboard camera to the image processing software called Stretchout. Other software used in the processing phase included Pix4UAV Gatewing Edition and 3D Reshaper.

Shortly after the flights, AB Concept delivered a high-resolution orthophoto of the entire site at +/- 5 cm resolution, DSM, DTM, and planimetric vector map. The vectors pinpointed locations of roads, water features, and the tops and bottoms of main slopes in the mine. All deliverables were received by the mine operator with enthusiasm, primarily because the cost of the DEMs was one quarter what it would have been for a survey crew and airplane. More importantly, the GPS-equipped team would have surveyed only five hectares per day compared to 400 hectares by the UAV. The mine operator was also pleased with the quality of the orthophoto. The spatial resolution and accuracy of the orthophotos exceeded that of imagery captured with a regular airplane.The garnierite mine operator has already asked AB Concept to bring the UAV back for the next surveying and mapping project at the site. In addition, AB Concept now has a significant advantage bidding on other open pit mine mapping projects in New Caledonia.