A helicopter-mounted lidar system helps in selecting a pipeline route in the complex terrain of Colombia, South America.By Oscar Fernando Parada and Taylor Davis
Pipelines are the safest and most efficient way of transporting oil and gas resources. However, pipelines present multi-disciplinary challenges, as they represent expansive and expensive elements of infrastructure that require careful planning and ongoing monitoring and repair in order to ensure safe operation. 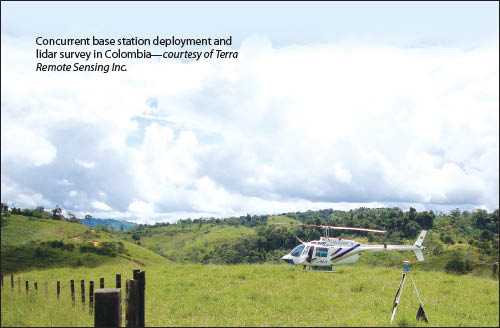 As pipelines traverse vast regions to bring distant resources to market, a range of geotechnical, environmental, and social issues exist along pipeline corridors, presenting many challenges for selecting pipeline routes. These challenges are especially present in Colombia where complex geological, environmental, and sociopolitical issues converge along pipeline corridors. Increasingly, engineering companies have been turning to remote sensing as a method to reduce acute risks to field personnel and to provide superior data, enabling informed decision making. Airborne laser scanning, otherwise referred to as light detection and ranging (lidar), has been growing in popularity in Colombia and is regarded as a safe and efficient method of data collection to support pipeline route selection studies.
GeoIngenieria, based in Costa Rica, has found that airborne lidar data provides several advantages over traditional field-based or photogrammetric methods to pipeline route selection and the Front End Engineering and Design (FEED) process and helps to overcome some of the specific challenges facing engineers in Colombia. GeoIngeniera is a member of the Antea Group, an international engineering and environmental consulting firm.GeoIngenieria contracted with Terra Remote Sensing of Sidney, BC, Canada, to acquire lidar data for a proposed pipeline in eastern Colombia.  The project was flown in November and December of 2012, and  the survey route was a corridor approximately 90 miles long with an average width of 1600 feet. The survey crosses rugged terrain with several hydrological features and dense vegetation. These conditions, combined with lack of accessibility and security, were significant considerations when planning the survey.The lidar is a proprietary system that was designed and assembled by Terra Remote Sensing to be mounted on helicopters. The system has a high-accuracy scanner and camera system contained in a pod, also designed by Terra Remote Sensing. The pod mounts to the underside of the helicopter, and the GPS antenna is mounted on the top of the helicopter. The operator sits in the back seat with the computers and console. The helicopter is a Bell 206B leased from Aerocharter Andina S.A of Medellin, Colombia. 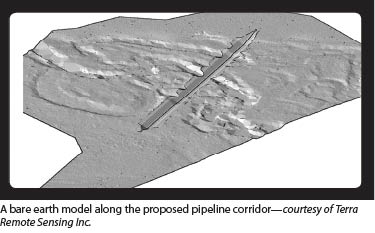 Despite having faced many sociopolitical issues that have presented serious challenges to investment and development, Colombia’s oil and gas sector has seen tremendous growth and is now South America’s third largest oil and gas producer. To put this growth into monetary terms, foreign direct investment in Colombian natural resources has increased from $500 million in 2001 to over $9 billion in 2011 (Colombian Ministry of Mines and Energy, 2012). Colombian crude oil production has also risen from 595,000 barrels per day in 2008 and is forecasted to surpass 1 million barrels per day in 2013. These increases in production have created bottlenecks in the current pipeline infrastructure, which has resulted in a rush to achieve greater capacity in Colombia’s pipeline network. Colombia’s estimated two billion barrels of proven crude oil reserves and 4.7 trillion cubic feet of natural gas are found mostly in the Andes foothills and the eastern Amazonian lowland jungles.  The result is that the majority of Colombia’s pipelines must travel through rugged terrain, heavy vegetation, flood prone areas, and areas of social conflict to bring the resources to the refineries and coastal ports.

Although Colombia has seen much greater stability and security over the last decade, significant social issues persist in many regions of the country, posing acute security risks. These risks present significant challenges to pipeline route selection FEED. In fact, between 2010 and 2011 the number of attacks on the oil and gas sector in Colombia increased by 63%, highlighting ongoing security concerns. Although this increase in violence was outside the general trend of greater security over the last decade, armed confrontation remains a day-to-day reality in many regions of Colombia, making field work extremely complex.    Carrying out traditional ground-based topographic surveys in Colombia often attracts attention from communities or property owners who may be along the right of way. Due to complex and long-standing social issues in many rural areas, obtaining permits to access private land is a difficult and time-consuming process. When conducting ground-based route surveys in Colombia, it is common to fail to obtain complete topography over the entire corridor due to denial of access. Having to generate alternate routes during the survey stage due to access denial can drastically increase project time-lines and costs. 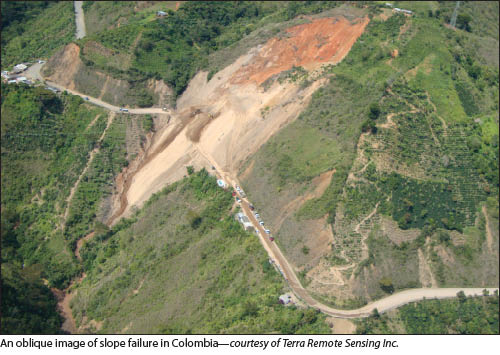 Conducting aerial surveys enables complete corridor acquisition and facilitates data collection in otherwise inaccessible areas due to social factors—this is a critical advantage presented by airborne lidar in Colombia. Having the ability to work within a wide initial corridor of complete data allows re-alignments to take place on the fly within the confines of the existing data, increasing the efficiency of the route selection process and negating the need for a return trip into the field. Once a complete assessment of the corridor has been completed, the safest, lowest-impact, and most cost-effective options can be presented to stakeholders along the corridor through a properly administered consultation process.

The combination of torrential rains, high side-slope gradients, and unstable soils presents complex geotechnical conditions that have to be factored into pipeline route selection, as they pose significant risks to pipelines.Colombia’s topo-graphy is dominated by three north-south trending mountain belts: the western central and eastern Andean Cordilleras, rising to over 5,700m. Colombia also has several active volcanos and is transected by several major fault lines, making it a highly active seismic region. Earthquakes have been attributed to many instances of slope failure in Colombia. Additionally, extreme rainfall events are coupled with difficult ground conditions, including sporadic mixes of sedimentary, volcanic, and metamorphic rock; exposed areas of fractured and tropically weathered bedrock; overlay of unconsolidated sediment; and areas highly susceptible to gullying and channel erosion. These conditions present a potent cocktail of geotechnical challenges facing engineers. As landslides are the most common natural disaster in Colombia, this risk highlights the utility of lidar in providing up-to-date and highly detailed topographic data for pipeline route selection. 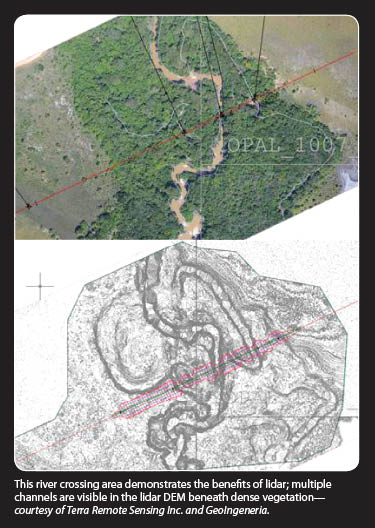 Collecting airborne lidar is much faster and more economical than traditional topographic surveys. As an example, a conventional survey of a proposed corridor 150km long and 50m wide would take approximately four months to complete, whereas a lidar and digital imagery survey over the same distance with a 500m corridor could be completed in a couple of days. In addition to the benefit of accelerated schedules, relatively wide corridors can be collected in single flight-lines, providing route planners more flexibility within which to work to find ideal routes that have the lowest geotechnical risk and least environmental and social impacts. Carrying out airborne lidar surveys limits the time crews have to spend in the field, providing cost benefits as well as reducing risk to field staff.

Having the ability to work within the context of a wider corridor allows for a better overall understanding of local drainage characteristics that naturally extend beyond the topography contained within the proposed right of way. These additional details allow for better decision making regarding recommended civil works for hydraulic control measures and improved geotechnical stability, factors of the utmost importance in Colombia. Due to the intense rainfall and soil conditions present in Colombia, improperly designed civil engineering works can themselves be responsible for creating geotechnical issues; thus, working with the best possible data is essential to reach results that have least risk of failure. Despite many areas in Colombia being densely vegetated, lidar, if collected properly, can effectively penetrate through dense vegetation to provide high-accuracy and high-resolution bare earth models, which arguably comprise the most valuable data contained within the lidar point cloud. These advantages are especially notable at river crossings areas along the route. The series of images on the facing page show a river crossing along a proposed pipeline route. The main river channel is visible in the orthophoto; however, the smaller tributaries and old river beds beneath the dense vegetation can not be seen in the orthophoto alone. Much greater topographic detail can be seen in the lidar digital elevation model (DEM), which is used to carry out simulated pipeline crossings to estimate cut volumes and impacts on river hydraulics and local ecosystems, all of which can be done from the desk.

As demonstrated in these images, DEMs are one of the most valuable aspects of the lidar data. However, additional value also is in the above-ground lidar point cloud. These data can be analyzed to estimate the impacts of vegetation removal along the proposed pipeline corridor and can help to estimate the potential environmental impacts of the proposed pipeline. Additional data can also be collected at the time of the lidar survey, such as digital imagery and data in the visible near infrared spectrum (VNIR) to support detailed vegetation species classification and ecosystem characterization. These data provide a rich baseline dataset prior to any work undertaken on the ground and can serve as important documentation of environmental performance and long-term monitoring should eventual pipeline construction take place.Many of the challenges facing pipeline route planners in Colombia are unique, but the benefits of lidar to pipeline route selection are not unique to Colombia. As Colombia continues to work through complex social issues that have shaped entire generations, the country is rebuilding its infrastructure and redefining itself as a unified and stable country with vast potential. Although small, lidar technology is playing a role in providing Colombian engineers with a tool that enables high-quality planning and engineering so as to maximize pipeline safety and minimize risk in one of the world’s most challenging regions.