Finally you can work with survey data in a GIS environment and preserve its integrity and precision; check out the Carlson SurvPC Esri OEM. 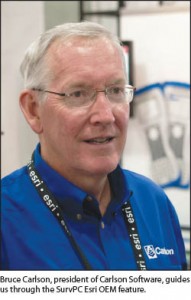 With apologies to Kipling: “GIS is GIS and surveying is surveying, and never the twain shall meet.” This is not really true … The two worlds, sometimes separated more by mutual misunderstanding and preconceived notions than anything else, have grown to co-exist and become co-dependent, whether or not folks realize it (or wish to admit it).

What if there was a seamless way to preserve the integrity and precision of survey data and work with it in a GIS environment? There has always been much to be gained by seamless integration; the spatial data management capabilities of GIS have great proven utility. Survey-GIS data integration has always been possible to some degree, but historically more than a little painful.

Many have sought this Holy Grail of seamless integration, but often they approached it from the GIS or CAD/CAE side. They produced sophisticated offerings, for example the Esri Survey Analyst offered rich functionality, as have some CAD-based modules and creative use of various feature-management tools like Safe Software’s FME (Feature Manipulation Engine). But to make something work well for surveyors and to maintain the features and specifications they require, a true solution needed to come from within a surveying environment.

A generally held view among many surveyors is that GIS cannot represent anything legal, so it is ironic that a partnership between Carlson Software and the Norway Land Consolidation Court (a land mapping agency with more than 80 crews) would be the catalyst for the development of this groundbreaking solution, the Carlson SurvPC Esri OEM feature. (OEM is the generic term of “original equipment manufacturer,” but it is applicable to software as well as hardware in instances where a product or part of a product from one manufacturer is integrated into the product of another by agreement.) 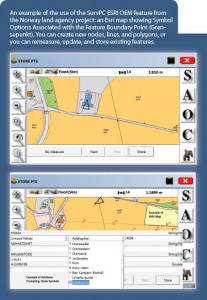 As someone who has struggled with (and been burned by) survey-GIS integration conundrums for decades, I find it hard not to characterize this as a really big deal. Bruce Carlson (president of Carlson Software) also finds it hard to contain his excitement at this (secret “skunkworks”) project coming to fruition and its success in meeting the rigorous requirements of the Norwegian project partners. Bruce gives us a guided tour of this new solution.

Surveyors face many challenges when working with GIS maps and in GIS mapping environments; the most familiar one, Esri maps, is a good example. One challenge is to see the GIS features in the field along with the survey data. This has historically been accomplished by translation, like importing and exporting “shapefiles” to/from ArcMap/ArcGIS. However, a translation strategy can lead to synchronization and versioning issues.

As an exchange format, shapefiles are common but can be cumbersome; the files contain the map itself along with the attribute information associated with map entities (a “shapefile” is actually made up of multiple files). For example, a manhole might have information on depth to invert, number of inlets, and material type. But shapefiles do not communicate with the map directly, and updates in the field do not update the map real-time—such details must be recorded and then exported.

But now, with SurvPC from Carlson Software, you work directly in the map, and you access all aspects of the map features and attributes automatically. Because SurvPC, which works on Windows 7 and higher, has the same full range of GPS and total station drivers as the SurvCE program, you can conduct high-precision field surveying directly in Esri maps. It is as simple as pressing S (or Enter!) to store. 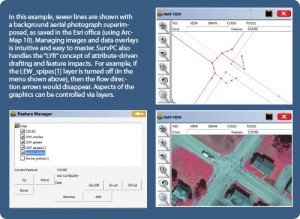 SurvPC with the Esri OEM engine can load Esri maps and work native in the Esri GIS environment; you step right in through the map pane of SurvPC. The map appears in the field identically as it was last saved in the office. Features and entities can be blocked from field edits or saved with full field editing permission. The bright color palettes of Esri maps, their ability to include image overlays, the entire library of symbols (nodes et al.), line types, and polygon types are all made available to the field user.

It is as if SurvPC were acting as a TV set and you had turned the channel to the Esri map—it appears in all its detail and intelligence. SurvPC “learns” the feature codes and attribute prompts automatically by simply loading the Esri map. Any consultant or agency surveyor can ask for the map (.mxd file) and geodatabase, in whatever form, take it to the field, and begin work immediately. 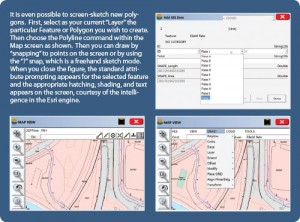 Esri maps are unlike typical drawings produced in CAD software. The very nature of Esri maps is that they contain data rich information, and the spatial component is imbedded in the native feature definition and can also be included as attributes. This provides for a lot of extra functionality.

The three main types of entities are nodes, lines, and polygons. SurvPC reads the database and displays the actual node symbols available for selection for any node feature, from a library of symbols created in the Esri map. One node feature, such as Control Point, might have a choice of five pre-defined symbols. Another node feature, such as Boundary Point, might have ten symbol options. All are, in effect, “discovered” and extracted from the Esri map and database without the need for advance preparation.

All attribute prompting, including symbol selection for nodes, appears automatically. Node features can be newly surveyed or selected and “remeasured” based on new, updated, or more precise locations. And they can be picked on the screen and updated with more current attribute information, live, or after the fact, even if disconnected from active GNSS or total station equipment. 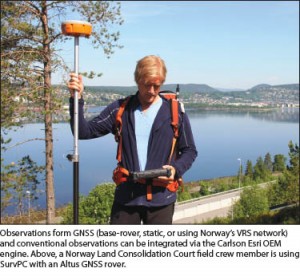 From node, the next level up in complexity is linework: lines for utilities, highway features, fences, etc.

Note that the field surveyor has complete control over the layers involved in the display.  The aerial photo can be removed by selecting the Layer command in SurvPC (Map screen, View pull-down menu) and turning off the aerial photo layer.

In this example, “Maine_Orthos” (from the ArcGIS compatible library of imagery hosted online by the University of Connecticut) has been added to the project space. There is a wealth of publicly available orthophotos and thematic data for nearly every part of the country from academic, state, local, and federal sources to enrich your projects.

Just as with node, lines can be edited three ways: surveyed brand new and added to the map, re-measured/updated at any of the vertices while in the field, or screen picked and edited after the fact without connection to field equipment. And yes, you can lock features to prevent inadvertent alteration. Line types are also “discovered” in the database itself and do not have to be created in advance. They are part of the “knowledge” contained in the Esri map when loaded.

Polygons in Esri maps offer a particular challenge because the editing of one corner of a lot, for example, may affect the shared corner of one or more other lots. For example, Four Corners in the United States marks the common boundary point of Utah, Colorado, Arizona, and New Mexico. If you were to re-measure that single point, all four state polygons would need to be adjusted! SurvPC accomplishes this by offering the ability to “snap to” or pick a point on a polygon and then selecting “Re-Measure.”

For example, pick the common boundary of the two blue-shaded buildings the figure shown on the previous page and choose the “Re-Measure” option. Then move to the common or distinct polygon point and survey its true, accurate position, followed by updating the attributes for the polygon. An attribute such as “Time of Survey” would need to be updated to the current time.

For all nodes, lines, or polygons, attributes such as “time,” “type of instrument,” RMS, and DOP values (if surveying with GPS) are known to SurvPC and can be automatically recorded with no user input. This is one of the most powerful elements of this approach, keeping the full trail of the surveying observations and their metadata connected to map features. This was very important for the Norway Land Consolidation Court; they need to be able to develop interactive maps to manage land but also to have the features in these digital maps backed up by accurate and defendable survey data. This Norway project shows that an entire, precise GIS can be built from scratch in native Esri format, using SurvPC.

Esri maps can be edited in the field, but they can also be staked out using the conventional endpoint, intersect, center, and node snaps.  SurvPC offers a unique combination of capabilities. It combines in one package full native operation in the Esri environment, while at the same time tapping into the full array of GNSS and total station drivers, while providing commands such as Trim, Extend, Offset, and Fillet. It combines CAD and precision GIS in one field solution.

Carlson has learned so much from early adopters, including Norway Land Consolidation Court, with over 80 field crews, and numerous U.S. government and consultant users.  Beginning with the high quality of the Esri engine itself, they have managed to build a product that adapts itself automatically to the wide variety of Esri maps and databases around the world.  Esri is a dominant GIS solution worldwide.  SurvPC is a product that cuts “prep time” and guides your work wherever Esri maps are used.

Many surveyors, public sector surveying and land administration entities, and private surveying firms have found that GIS can be a powerful tool for planning and managing projects, indexing and geo-referencing spatial records and control data. And equally important, an increasing number of clients are asking for GIS-ready deliverables. Now you can do this comfortably within a surveying/CAD environment. Perhaps it is time to shuck off fear and preconceptions of GIS and finally step through the looking glass.

One feature developed to meet the rigid criteria of the Norwegian Land Consolidation Court by the team at Carlson Software enables the statistical analysis of repeatedly observed points. The standard practice for the 80 crews using their Altus rovers for RTK and RTN observations is multiple observations on each visit, and on return visits (that can be hours, days, or longer apart). Crews store points, using the same name for a given point for all repeat observations. GNSS vectors are stored in the RAW files and exported to SurvPC (the feature has now been added as standard to compliment the generic observation analysis feature). In an example, Bruce showed a list of repeat observations from the Norwegian project, spread over a 16-day period, and the repeatability was excellent.

Each set of repeat observations is run through a Chi-squared test, with fail-pass thresholds (in this example) as specified by the Land Court. With outliers identified, selective removal can be done. If a point’s horizontal value is rejected, it removes both the horizontal and vertical, but the vertical value can be removed independently; then the test can be run again.

A weighting strategy was supplied by the Land Court for the initial design of this new feature; for instance they had asked that a checkbox could be added for when a rod was used without legs (rarely practiced, but it was included in the weighting factors). This statistical analysis tool has become best practice for the Norwegian Land Court crews and should be seriously considered for adoption, for appropriate uses, here in the U.S. and Canada.