This entry is part 1 of 9 in the series December 2013
A mapping project helps kids with autism by coaching them to build and fly a UAS (and make movies with it); the project also reveals sound business practices stemming from this new technology.

What was it that got you into the surveying and mapping profession?  Surveyors often state that it was an interest in math and science combined with a desire to work outdoors. For me, back in the 1980s, it was a combination of my growing awareness of the systems at work around me (social, economic, physical)—combined with the advent of the PC and GIS software that created unique opportunities to map and model these systems. The development of the unmanned aerial systems (UAS) market is another such trend, and it is having worldwide impact on our industry and beyond. Countries outside of the United States have employed UAS-friendly policies and have seen accelerated product development, integration of the technology into surveying and mapping services, and an expansion of market opportunities. In fact, the odds are good that you have spent time lately reading about those activities. Inside the United States, our federal government is evaluating how to integrate the technology into the national air space, while state governments and advocacy groups debate the impacts of the technology on issues such as privacy. There is much to look at there.  One thing is clear: the technology is here and it is changing our industry in many ways, including how individuals and organizations acquire information, how this technology is significantly expanding the volume of imagery and data available to us both personally and professionally, as well as how it is reducing the barrier of entry for offering mapping services and solutions. 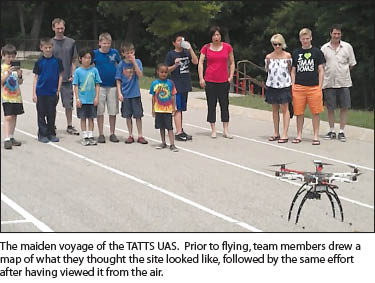 The Taking Autism To The Sky (TATTS) project showcases these trends, so much so that the group of kids involved may just be one of those new competitors you have to worry about.  Okay, maybe not just yet.  However, the project does indicate many of the market forces set in motion by UAS.

The TATTS project was a six-month endeavor with the goal of giving kids with autism a new perspective of the world—from the air—by building and flying an unmanned aerial system and making a film of their journey.  A secondary goal was to evaluate the UAS marketplace for two things:

TATTS spawned from the convergence of the proliferation of recreational and civil UAS uses, the maker movement and its emphasis on using open source technology to personalize manufacturing, and the emphasis in the autism community on developing social and employment options that play to the strengths of people on the autism spectrum. Personally, I was inspired to start TATTS by my 11-year-old son, Mitchell, who loves to make things and explore and is on the autism spectrum.. 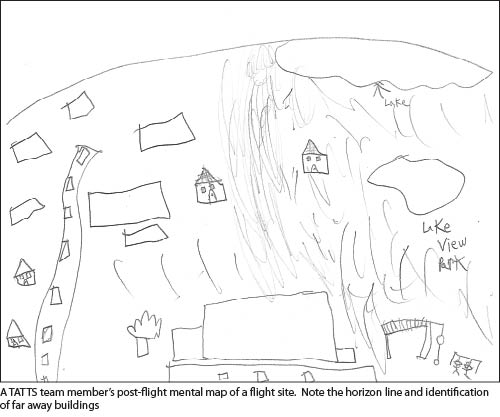 The TATTS team was comprised of eight boys from 6-14 years old, several siblings, and at least one parent for each child. I facilitated the project with a key volunteer who assisted with technical testing, setup, and facilitation.Funding for TATTS was crowdsourced through KickStarter, one of several popular crowdsourcing initiatives now available. Over 70 financial backers worldwide supported the project by pledging $3,500. (Funding for the TATTS project was covered in the April 2, 2013 issue of PSM’s enewsletter, Pangaea.)Although people with autism face significant challenges that lead to high rates of unemployment (see the sidebar on Autism), they tend to have unique qualities that prove useful to the UAS market and, possibly, to the surveying and mapping industry at large.  They often enjoy technical tasks, have a knack for out-of-the-box thinking, and are able to focus deeply on the task at hand. With 50,000 high school students with autism graduating each year, we need to do something to bridge this gap.

Key to TATTS was the safety of the participants as well as the people and environments around them.  Our starting point was ensuring a clear understanding of current FAA regulations for recreational UAS use. (Those regulations are clearly articulated in FAA Advisory Circular 91-57 and UAS Systems Integration Roadmap.)  Of particular note were the requirements of flying below 400’, a sufficient distance from populated areas, and at least three miles from an airport. We also emphasized always keeping the UAS within line of sight of the operator and having at least one spotter involved in each mission. Additionally, the project required that a parent be actively involved in each session to help facilitate the activities. 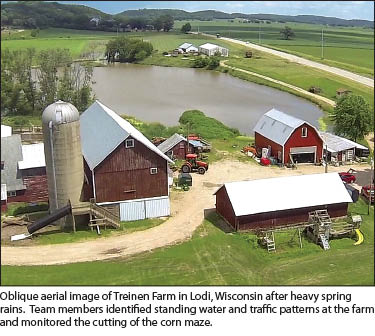 Maker movement philosophy was core to TATTS, and our technology selection was predicated on selecting components that the kids could understand, manipulate, and build. We shied away from ready-to-fly kits for more of a best-of-breed approach. However, given the constraints of autism, we focused on technology that was proven, affordable, extendable, and relatively easy to fly. The real-time experience of flying and perspective taking, not just end-products of imagery and derivative map products, were also important, so the selected technology needed to support that process. We wanted the TATTS team to see themselves, each other, and the places they know from the air and to do so in real time.  Other core selection criteria included design by components (for incremental development and easy customization), stability of flight, carrying capacity, weight-to-flight-time ratios, and fail-safe components.  As with any aerial platform, sensor/camera selection is key. Off-the-shelf UAS products typically offer one or two camera options, but from a DIY perspective, the choices are much more varied. We chose the GoPro Hero3 because of its small size and weight, image quality, and the prevalence of gimbals to house and manipulate it on the UAS. 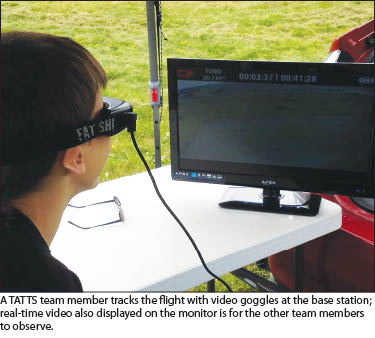 TATTS was divided into four phases: 1) building the UAS and flight practice on the simulator, 2) test flights in the field, 3) landing gear, gimbal, and sensor installation followed by numerous flights, and 4) movie production.  Over the summer, TATTS team members got together almost every week for a few hours. Sessions were typically parsed into several concurrent activities, and the team broke into small groups and worked through each activity. For example, a phase one session had three concurrent activities: building the UAS, practicing on the flight simulator, and flying toy helicopters. Initial sessions were held indoors and eventually moved to key project sites that met FAA requirements.

TATTS has developed and strengthened numerous skills among project team members.  They learned about the mechanics of flight, including pitch, roll, and yaw, flight planning, and in-field flight safety. The team also learned how to fly, including that we all have different flight techniques. Some pilots are “heavy on the stick,” others not so much.  Also, a rotary wing UAS is easier to manage given its ability to hover.  Struggles appeared: When the UAS is in the air, it can be difficult to identify the front of the aircraft (even with red arms in the front). Also, it is difficult to imagine yourself in the cockpit; for example, when the aircraft is coming toward you, to turn to your left means you need to turn the aircraft to the right.  That’s not as easy as it sounds. The team had ample opportunities to sharpen their social skills.  Teams of two worked together as pilot and navigator in fictional search-and-rescue missions.  They worked as teams during construction of the UAS.  They practiced turn-taking throughout the project, which can be difficult with only one aircraft, and they continually focused on encouraging each other.TATTS clearly gave team members a different perspective on the world, as could be seen from the “ohhs” and “ahhs” during flight as they watched the video and from the pre- and post-mission maps they made.  TATTS team members also had opportunity to leverage their almost-inherent video-editing and production skills. Finally, the team received solid exposure to surveying and mapping principles regarding the constellation of satellites that supports the GPS signal leveraged by the UAS, as well as basic photogrammetry in the production of photo-mosaics.The primary goal of giving kids with autism a new perspective of the world has clearly been met.  The secondary goals of identifying this as a venue for educators to pursue STEM education and to identify employment options are works in progress.  Exposure to the project and our findings will help, as well as views of the videos via YouTube and presentations at schools and professional conferences.  The work continues.

Autism
You see and hear about autism frequently these days. Its prevalence has increased with the Center for Disease Control now stating that 1:88 people are diagnosed. Thankfully, with the increase in rates we have also seen an increase in media coverage, funding, and medical research. Although autism can affect people in many ways, one common struggle is a lack of social skills. Of particular concern for TATTS is the impact on lifetime employment, given that a lack of social skills decreases a person’s ability to understand the “hidden curriculum” of social nuance, as well as to convey ideas, work in groups, and fit in standardized work environments.Because of the struggles brought on by autism, unemployment rates for those on the spectrum are abysmal. A recent 10-year, nationwide study found that only about half of those with autism had ever held a job since high school and only about a third were currently working.  Even worse, young adults on the autism spectrum were less likely to work than people the same age with other disabilities, and when they did find work, they made less money.  On average, young adults with autism earned $8.10 an hour, while those with other kinds of impairments, including low IQs, learning disabilities, and trouble speaking and communicating, were paid between $11 and $12 an hour.

The TATTS UAS is comprised of this equipment:

The K.I.S.S. principle (keep it simple, stupid) applies here.  Whether you are using UAS technology professionally or personally, off-the-shelf or DIY, start simple and add technical components incrementally. Learn to operate the UAS first with short, small flights focusing on simple mechanics. Keep a pre-flight checklist to ensure that safety procedures are followed, the UAS is in flight-ready condition, and items such as fully charged batteries are on hand.  Practice. Assuming you are not flying autonomously, be sure to practice flying a simulator.  Simulator time is critical to successfully piloting a UAS such as this one, with at least 15-20 hours of practice time recommended. Be ready to process a great deal of content. It is easy to take a lot of pictures and video, but what you do with them is another matter entirely.  Consider leveraging cloud-based image-processing services or photogrammetry companies that have strong image-processing capabilities.  The maker movement and UAS go hand in hand.  There are many off-the-shelf products available from a growing list of manufacturers, but there is also a viable component-based market available.  Most importantly, TATTS demonstrates that there are non-traditional sectors of the population that offer your organization unique employee skill sets down the road.  Keep an eye on these kids!