There is a “mapping gap” that has been a challenge to effective asset inventory and management; a new product from Trimble, the Trimble MX2 Mobile Spatial Imagining System (click here for the press release), is the type of solution that may help greatly in filling that gap.

Mobile mapping can collect huge amounts of high-precision topographic data—only total stations and some types of GNSS can achieve higher precision—but it takes time. These legacy methods are often not cost-effective for large-scale mapping projects. What a difference a few years makes. Until very recently it was only on the largest projects that the use of high-end mobile mapping systems could be justified. Typically, high-end mobile mapping systems are not only expensive, but can also pose logistical, operational, and data-processing challenges.

For detailed specs on the new Trimble MX2 system, check the manufacturer’s website, but a thumbnail sketch of the MX2’s notable features would have to include its size, portability, optional components, and high-precision/performance for a unit at a price-point less than half that of most high-end systems. The sleek and surprisingly small system comes with either one or two scanning heads, time-of-flight lasers that are capable of registering multiple-returns and collecting up to 72,000 points per second (for the dual head unit). Precisions at distances the order of 50m or less, typical of mapped corridors, are in the range of 1-2cm (3D), but the system can work effectively at up to 250m, depending on application. As an add-on accessory, the 360° Ladybug camera (from Point Grey) adds mainly contextual imaging, but these images can also enable rudimentary terrestrial photogrammetry. 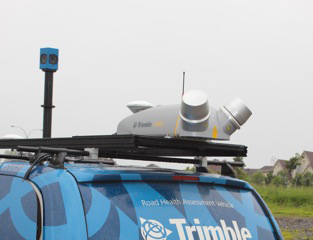 Standard on the MX2 is the Applanix POS-LV positioning and orientation system, with two GNSS antennas and built-in IMU (inertial). With Applanix’s SmartBase post-processing, it yields the very same trajectory data integrity as the high-end units. Read our sidebar on how POS-LV works from the March 2013 issue of PSM.

The system fits in a Pelican case, can be shipped or bag-checked, and can be mounted on nearly any vehicle, even an ATV. There is no bulky external power or computer gear to lug around; the only item in the vehicle is a hardened laptop (operator console) that comes with the system. Operation and required training is minimal, and that includes the post-processing steps for both the trajectory (positioning and orientation) data, but also the registered point cloud data. Companion upgrades to the downstream software are available, primarily the Trimble Trident Imaging Hub; think of it as a sort of “TBC [Trimble Business Center] for Imaging/Mapping.” There are even some cool built-in software modules, like one for pavement assessment. In short, the system produces the very same types of deliverables that a high-end system can.

Some systems have nibbled around the edges of optimal precision/price/usability—this system certainly punctuates and makes a notable leap forward in that trend. A stock MX2 package comes with POS-LV, all the software you need to operate and post-process the data (DMI and 360 cameras optional). While pricing might vary for different world markets, an equivalent cost for an MX2 would start at around what it would cost to fully outfit a survey crew; add up a high-end robotic total station, software and accessories, a base and rover, and this would be the price range of a single laser MX2 with software. Add another total station and you’d be in the price range of a dual laser MX2.  This is a very competitive price point for mobile systems of these capabilities. The potential to enter these growing markets and to pursue such mapping contracts is now within reach of small- to-mid-sized surveying firms.

I asked Peter Houghton, project manager for the MX2, what they had in mind for markets and user segments when they came up with the MX2. He said, “Most of the systems out there, by Trimble and others, tend to be these high-end systems geared for specialist users or service providers doing very large-scale projects on state or national level contracts; like with DOTs—these are the [users] that the high-end units are targeted at. There would be a specialized vehicle and you’d [have to] survey many kilometres to make the best use of the [high-end units]. We started looking at what we could do to provide something that was more ‘available’ to small- and medium-sized surveying companies.”  Houghton was frank in discussing the limitations: “It probably is not going to do those hundreds of thousands of kilometres [of mapping] but there are a lot of similar kinds of work in the smaller contract types.”

It was inevitable that at some point the ease-of-use, reliability, precision, and price point of mobile mapping systems would find an accessible convergence. This opens new doors and markets for broader adoption by surveying firms and could help to fill the “mapping gap.”