This entry is part 3 of 9 in the series December 2013
We are writing at the end of 2013, when geographic information and spatial thinking, both essential for the surveying profession, are increasingly part of our daily lives and jobs. The availability and the speed with which we can connect and use this geographic information, and even our way of spatial thinking, has changed dramatically in recent years through everyday use of things like our smartphones. These changes have been happening within and outside the surveying profession.

New possibilities and opportunities require new skills and flexibility from individuals, companies, and organizations. The adoption of new skills and this flexible way of thinking is often fueled by young surveying professionals. But where to find these young ones?As young surveying professionals and active members of the International Federation of Surveyors (FIG) Young Surveyors Network, our goal is to find them.

The expression “The Young Ones” may conjure a song in your minds (at least for Baby Boomers). “The Young Ones” was a famous single in the 1960s from Cliff Richard and the Shadows (with enduring popularity in the U.K. and Europe). The beginning of the lyrics describe the young generation:The young ones,Darling we’re the young ones,And young ones shouldn’t be afraid. To live, loveWhile the flame is strong,For we won’t be the young ones very long. The lyrics are about the difficult situation of needing to make the next step: graduating from university and stepping out into this world to take chances. 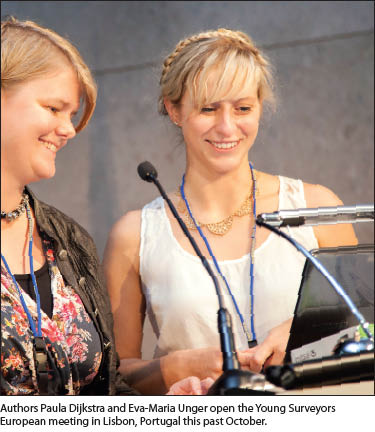 To be honest, we don’t know of many other professions that are quite as flexible as surveying in offering so many different opportunities. So, why is it so hard to find those young ones if everything seems to be so wonderful for them in our profession?To find them we need a different way of attracting them and even communicating with them. The generation that is currently entering universities and those who will graduate soon can hardly remember the time without smart phones. This generation, born in the 1990s, is used to being reachable anywhere and seem to be more connected with their friends digitally than in real life. They’re communicating differently and, in some ways, their values and ideas are different. Having access to seemingly limitless information with the touch of one button (most likely an app) changes the nature and the level of one’s curiosity and interest. Established universities, companies, and associations in the surveying community must respond to this change.Dynamic institutions will always adapt to their environment in order to survive. To understand why, we just need to look back in history (which is a paradox itself) at Darwin’s evolution theory: The better you adapt, the higher the success rate to continue your operations. Adapting to new circumstances ensures continual development.In order to survive this evolution, organizations, universities, and companies in the surveying profession have to be aware of a possible hazard that can influence this natural selection process. The chief influence is the general aging of the surveying sector—the large number of surveyors from the baby boom generation in Europe and the United States, those who had been the young ones years ago. This generation will retire within 10 years, and yet the “new” young ones are missing. The generation that is currently entering university and those who graduated in the last 10 years are the change agents in this evolution process. 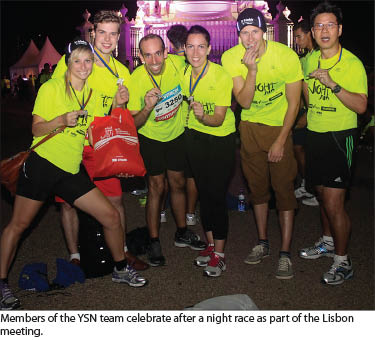 All over the world, capacity-building initiatives have been started to attract young surveying professionals: to raise enrollments, to adapt the curricula to the demands of the market, to even make the profession itself more attractive, and to close the gap between students and the labor market. Let’s look at this ongoing process, how it currently affects and how it could affect the future of the surveying profession.In 2006 within FIG, a working group named Young Surveyors was established with the aim to bring more young surveyors into FIG. These past seven years have been years of success, friendships, commitments, action, events, conferences, and especially hard work. Starting full of enthusiasm and with a big idea, the FIG Young Surveyors made huge steps and showed their ability and responsibility to accelerate to the next gear. In 2009 the working group became upgraded to the Young Surveyors Network (YSN) and was promoted to the same level as the FIG Commissions. Of course, the expectations were also getting bigger, and we reached them. We won’t list all the actions and accomplishments of the Network here, because they’re on our homepage and in our newsletter, but we want to talk about some highlights and, in a surveyor manner, some hard facts. 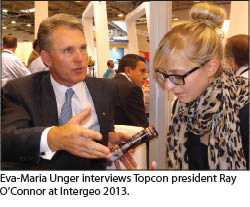 Nowadays social media can be used as a gauge of popularity. Some may may not like that, but this is one of the few ways the YSN can measure how many people know of, or recognize, the work of the YSN. And it’s how we stay in touch with colleagues from all over the world and learn from their experiences.The FIG Young Surveyors Network started a Facebook group back in 2009, and since then 2,000 surveyors have joined to share topics, tips, resources, links, reports, pictures, and comments dealing with the surveying profession—from all around the world. Since 2012, approximately five people have joined daily. Of course, this number is higher during events and may be lower during “down” time. Nevertheless, approximately 10 posts dealing with surveying appear every day. Some of them lead to discussion, some of them are asking for help on using specific hardware or software, and some are simply informative.We use additional social media channels such as Twitter and LinkedIn. Twitter is not the most commonly used medium because it does not have the same discussion options you have on Facebook or LinkedIn, but it is picking up in popularity as a mechanism for giving people quick alerts about news items or conference proceedings in real-time. We have almost 800 members on LinkedIn, the place to be for in-depth discussions. Another benefit is that you have access to the professional network of other young professionals, which can be helpful for your career. You can reach colleagues from all over the world within one day. Another benefit of being linked up to multiple social media feeds is that these provide threads into related discusions and resources.Major YSN events have taken place during or in conjunction with other FIG events. YSN is enabled and encouraged by FIG to have our own sessions and presentations, to create FIG working groups, and even to organize separate workshops with cooperating NGOs, companies, and professional organizations. A big step was taken in 2012, the first FIG Young Surveyors Conference which was organized and held prior to the FIG Working Week in Rome. About 140 motivated and highly interested young professionals from all over the world participated in this conference, even two from the United States. After the conference the word quickly spread to encourage young professionals to become part of the YSN and even start their own nationwide networks and affliates.So far so good, but the question is: Why this article and why in Professional Surveyor Magazine?

We encourage you to get in touch with us and show us your interest, motivation, and ideas—on how we could get a YS Network started in the U.S. There are currently more than 80 colleges and universities in the U.S. and Canada offering ABET-certified surveying and geomatics programs. Several state surveying associations have organized young surveyor groups. There also have been initiatives from the National Society of Professional Surveyors (NSPS), which is a member association of FIG, encouraging all universities and colleges to form and start a local student chapter. Currently there are 11 student chapters in place. This a great place to start. Our plan is to get in touch with all of the initiatives and identify key persons who want to take a leading role and get things started in the U.S. Also, we would like to get in touch with companies based in the U.S. and get to know what they are expecting from young professionals and how we can join forces regarding innovations.Of course, we can also offer something for the U.S. in return, and not just sharing experiences, building connections, and making friends (although all of these are important goals of the Young Surveyors Network). There are currently two great opportunities where we are encouraging young American surveyors to take part in and/or apply.For the first time, two young American surveyors participated in the International Training Course in Topography for Young Surveyors, in Lisbon, Portugal this past October. If you missed this opportunity, you have the chance to participate next year. For more information about the course and the application process, get in touch with us.The FIG Foundation is providing funds to cover the costs to participate in the 2014 FIG Congress in Kuala Lumpur, Malaysia. Eight fellowships will be awarded, and one of those especially addresses North America. So, that’s your chance to meet us! We are looking forward to a lot of applications from young American surveyors. For more information, visit the FIG Foundation homepage: fig.net/figfoundation.YSN is a network, and it is there for everybody. So let’s join forces and show that these young ones are out there and that we are capable of shaping the future of surveying. Of course, we would be grateful also for networking with the senior professionals who are still young at heart.

Where Are the Young Ones in the U.S. and Canada? The YSN might be just getting started in the U.S. and Canda, but there has been plenty of activity among North American young folks in surveying and geomatics schools, professional associations, and related industries. John Hohol, president of the FIG Foundation, USA, hopes that the growth of YSN in Europe can be repated on this side of the Atlantic. “The FIG YSN has come a long way since it was first proposed and initiated in 2006 by the first chair, Cecilia Lindén [in Sweden]. It was first established as a Working Group with FIG Commission 1 [Professional Standards and Practice] and FIG Commission 2 [Professional Education],” says Hohol. He and the FIG Foundation board of directors have encouraged and supported the promotion and expansion of the YSN.  In 2012 alone FIG budgeted over 60,000 euros (over $80,000) in support of young surveyors and the YSN. Support continued in 2013 and into 2014, especially for the quadrennial FIG Congress which will be held in Kuala Lumpur, Malaysia.  Both Kate Fairlie (current YSN chair) and Eva-Maria Unger (incoming YSN chair), along with many others in the YSN, have been very proactive in promoting the YSN worldwide.Hohol provided examples of state association activity: “The cover of a recent issue of the Wisconsin Society of Land Surveyors newsletter featured the YSN, and a young surveyors event was held in conjunction with the Minnesota Society of Professional Surveyors 2013 annual meeting; I hope we see more of this.“ Eva-Maria visted the U.S. and Canada in 2012 and attended many association meetings and surveying conferences; one of the goals for her tenure as incoming YSN chair is to follow up on the many connections she made with young surveyors here.There are other resources avaialble to foster young surveyor activities; one example comes from www.GoGeomatics.ca, a publication, social media, and web resource for surveyors and geomaticians that also hosts monthly social events in major cities across Canada.