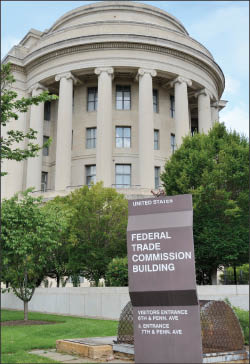 Imagine that a surveyor is contacted to provide property surveys and topographic mapping for the planning and potential design of a major new highway project. All the initial processes—the collection of parcel information to conduct a corridor analysis, to study alternative alignments for the road, to select a right-of-way, and to identify properties for which eminent domain proceedings should be initiated—require address, parcel, and location information.  The government agency that will build the road has not decided its final alignment or location, so it is not yet ready for a public announcement or notification of property owners.This is a fairly typical scenario for many surveyors.  But a new federal regulation may make that project impossible for any surveyor to complete.

The Federal Trade Commission (FTC) has issued a report, “Privacy in an Era of Rapid Change” (www.ftc.gov/os/2012/03/120326privacyreport.pdf), suggesting firms engaged in collection, sharing, or use of “precise geolocation data” about a citizen obtain “affirmative express consent”  or advance approval of each such citizen.  In our scenario, how does the surveyor collect, store, and apply data on dozens of property owners, including address and parcel information, without obtaining each property owner’s prior approval and without the government agency prematurely notifying land owners whose property may never actually be needed for the project?And, if a surveyor is asked to prepare a geographic information system (GIS) for a city, town, or county to include parcel and/or address information, compliance with the FTC policy would require the extraordinary time and expense of contacting every homeowner in order to obtain his or her “affirmative express consent.”  Properties of land owners who do not provide such permission will have to be redacted from the GIS, rendering it useless. MAPPS, NSPS, and other organizations, many of which are members of the Coalition of Geospatial Organizations (COGO), filed comments in opposition to the first draft of the FTC report, objecting to the regulation’s adverse impact on surveying, mapping, and GIS activities.When the final FTC report was released in March of last year, the only recognition of the community’s concern was a footnote stating: “With respect to use of geolocation data for mapping, surveying or similar purposes, if the data cannot reasonably be linked to a specific consumer, computer, or device, a company collecting or using the data would not need to provide a consumer choice mechanism. Similarly, if a company takes reasonable measures to de-identify smart grid data and takes the other steps outlined above, the company would not be obligated to obtain consent before collecting or using the data.”Dr. Carolyn Merry, chair of the Department of Civil, Environmental and Geodetic Engineering at The Ohio State University and then-COGO chair, said in a letter to the FTC, “The Coalition has been concerned from the start that the professional services provided through surveying, mapping, and geospatial data collection would be harmed with the impractical requirement of a consumer choice mechanism.” COGO has expressed its concern that the footnote does not adequately address the activities of the geospatial community and is not as comprehensive as the FTC had led COGO and the community to believe it would be. They again urged the FTC to modify text within the body of the report to clarify the issue.  The final FTC report established “a final privacy framework for companies that collect and use consumer data for commercial purposes” but “is not intended to serve as a template for law enforcement actions or regulations under laws currently enforced by the FTC.”

The FTC policy is not an isolated matter.  There are serious threats to the surveying and geospatial community through two parallel activities related to individual citizen privacy.First, there are bills in Congress and state legislatures and the aforementioned FTC policy that seek to limit the ability of firms to collect, store, or use information about a citizen, including “precise geolocation data,” a term none of these government orders has defined.Additionally, there are bills in Congress and more than 35 state legislatures to limit the use of “drones” or unmanned aerial vehicles (UAV) or unmanned aerial systems (UAS).  While these bills’ intent is to prevent the use of drones for surveillance by government and law enforcement agencies unless a search warrant is issued by a court, many are written in a way that could affect future use of UAVs for aerial surveys or even existing aerial surveys with manned fixed-wing or helicopter platforms.Fortunately, some legislators are beginning to understand the importance of aerial surveys, whether from manned or unmanned platforms. A drone bill enacted into law in Idaho, SB 1134, provides a specific exemption for “an unmanned aircraft system used in mapping or resource management.” SB 200, a bill pending in the Georgia state senate, would exempt “any object, mechanism, or vehicle deployed in flight for the purpose of mapping, cartography, or surveying or imaging of land if such deployment is made without intent to engage in surveillance or search and seizure.” In U.S. Congress, S.1057, introduced May 23 by senator Mark Udall (D-CO) is like the Idaho state bill in that it exempts “an unmanned aircraft system used in mapping or resource management.”MAPPS and NSPS have adopted resolutions proclaiming “that imagery and geospatial data is essential to commercial and governmental activities, the collection, storage, and use of which can and should continue to be permitted and encouraged for the benefit of the citizens of the United States.” The resolutions declare that “geospatial data is derived from images and data collected from a variety of airborne and spaceborne platforms, as well as other mobile/terrestrial-based acquisition systems.” They resolve that “imagery and geospatial data collection, usage, and application is a valued part of the modern American economy, as it is broadly applied to improve the analyses and decisions necessary to sustain and enhance the quality of life, is not synonymous with ‘precise geolocation data’ as such term is used by the Federal Trade Commission and in legislative proposals, and functions in a manner that does not threaten the privacy of individual citizens.”  As of the writing of this column, a similar resolution is pending before COGO.This is an issue that deserves the attention of every surveyor and geospatial professional in all disciplines.