Thus far in my “insider story” series (June, July, August, September), I have described how, while working for Trimble in 1996, I first became aware of the technology and Cyra Technologies, a pioneering start-up developing it. After a jaw-dropping demo, I dove into evaluating the technology and Cyra for a possible strategic partnership with Trimble. Cyra’s CEO, Ben Kacyra, was likewise evaluating Trimble and other potential strategic partners to help commercialize the technology.

Over the course of my evaluation, I checked off several key boxes. One was that Cyra’s 3D laser scanning technology was being developed to solve a known problem: how to safely achieve fast, accurate as-builts that are critical to problem-free plant retrofit design and construction. Traditional, manual plant as-built methods were labor intensive, sometimes hazardous, and often fraught with error.

Cyra had also achieved what appeared to be a solid proprietary position. In addition, the technology was already at beta stage, with four world-class users: Chevron, Fluor Daniel, Raytheon Engineers & Constructors, and the U.S. Navy. Although beta trials were not problem-free and were taking longer than planned, I was optimistic. Overall, things were encouraging.

A Most Interesting Suggestion

At one point, well into our evaluations of each other’s companies as partners, Kacyra asked me about joining Cyra–a major new wrinkle in our discussions. And I mean “major.” Although I was interested in the technology and Cyra, I didn’t immediately say “yes.” Why not? I had a good career situation at Trimble, plus I had significant, overhanging family and financial responsibilities. Taking a risk on joining a start-up was not to be considered lightly.

As my evaluation continued–for Trimble and for myself–I put additional scrutiny on remaining evaluation checklist items. I also added “personal” ones: my potential role with Cyra, fit with colleagues, compensation and stock options, etc. This meant adding private, evening meetings with Kacyra.

Remaining business evaluation items included understanding competition and the technology’s potential market size. Regarding direct competition, Kacyra described two other 3D laser scanner vendors, also new in the market. One was Mensi, a research spin-off of EDF, the national electricity company of France. The other was Riegl, a small, family-owned, laser distance technology company in Austria.

Kacyra explained that he and Cyra co-founder, Jerry Dimsdale, had visited Riegl and other potential vendors/partners to vet Cyra’s development and explore possible collaboration. Kacyra exuded confidence that Cyra’s laser scanner was significantly better than competition for industrial plant as-builts, pointing to specific accuracy-at-range capabilities of their Cyrax scanner.

Kacyra also described close-range photogrammetry, which was then the prevailing high-tech method for creating 3D as-built models of industrial plants.

Assessing high-accuracy close-range photogrammetry and its level of adoption was important for two reasons. One was to assess the likelihood of 3D laser scanning displacing and/or complementing it. The other was to understand the size of the close-range photogrammetry market, as that would be one indicator of how big 3D laser scanning could become.

A plus for close-range photogrammetry was that the equipment was small, relatively inexpensive, and readily available. However, potential advantages of 3D laser scanning over it were compelling. First, getting geometry measurements with 3D scanning was quicker as it was direct capture and measurement. Close-range photogrammetry involved extensive office processing before geometric data could be provided.

For close-range photogrammetry, both field and office work were time consuming, and its maximum practical range to meet plant design accuracy requirements was only 15 to 20 feet.

Finally, as I researched it, close-range photogrammetry appeared to be almost more art than science. I ran across anecdotal projects where a resulting 3D model was inaccurate. In some cases, it had gotten a bad name.

I wasn’t too worried about 3D laser scanning being able to replace and/or complement close-range photogrammetry. However, only a handful of small companies or departments provided close-range photogrammetric services for plant as-builts. The largest may have been doing, at most, $10 million per year in services business. Camera sales were still lower. The market at that time for “high-tech solutions” to the plant as-built problem was small. That was a worry.

He also cited the possibility of using 3D laser scanning for civil projects. He was enthusiastic about how large the potential market for 3D laser scanning was. However, he couldn’t quantify the size of the manual as-built or the “use old drawings” market.

The actual size of the potential market for this new technology was a big question mark for Trimble and for me. (Later, after I joined Cyra, tackling this topic with hard data would be one of my most important roles.)

Assessing Cyra’s staff was useful for Trimble’s assessment of Cyra. It was also important for me, as working alongside sharp people had always been a big plus and attraction career-wise. I hadn’t yet met him, but I knew the scanner’s inventor, Dr. Jerry Dimsdale, had been with University of California-Berkeley when Kacyra and Dimsdale co-founded Cyra Technologies. 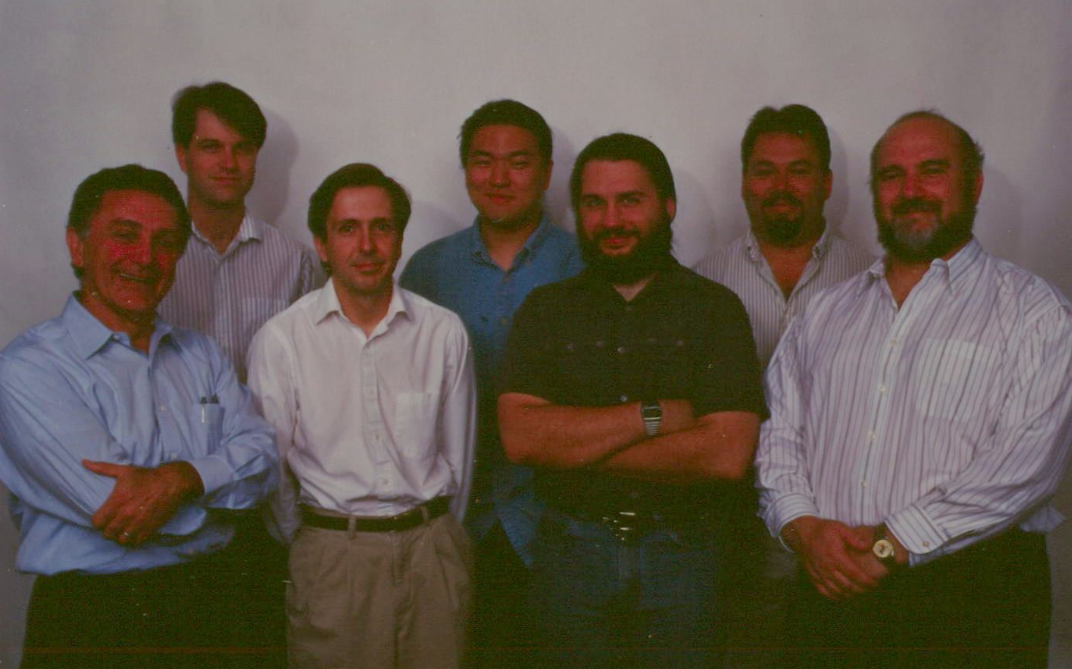 UC-Berkeley is one of the world’s most prestigious universities, especially in science and engineering. As I met additional Cyra staff, I learned that many were from UC-Berkeley. I was also aware of Cyra’s heavy interactions with Stanford, MIT, and Los Alamos National Labs–all top technology centers. I was convinced Cyra had a top technical team.

During my private discussions with Kacyra about my possible role, potential stock options, etc., I gained additional insights into Kacyra’s ability to lead this start-up into a successful commercial enterprise. He’d done these types of start-up ventures before via his previous engineering company. 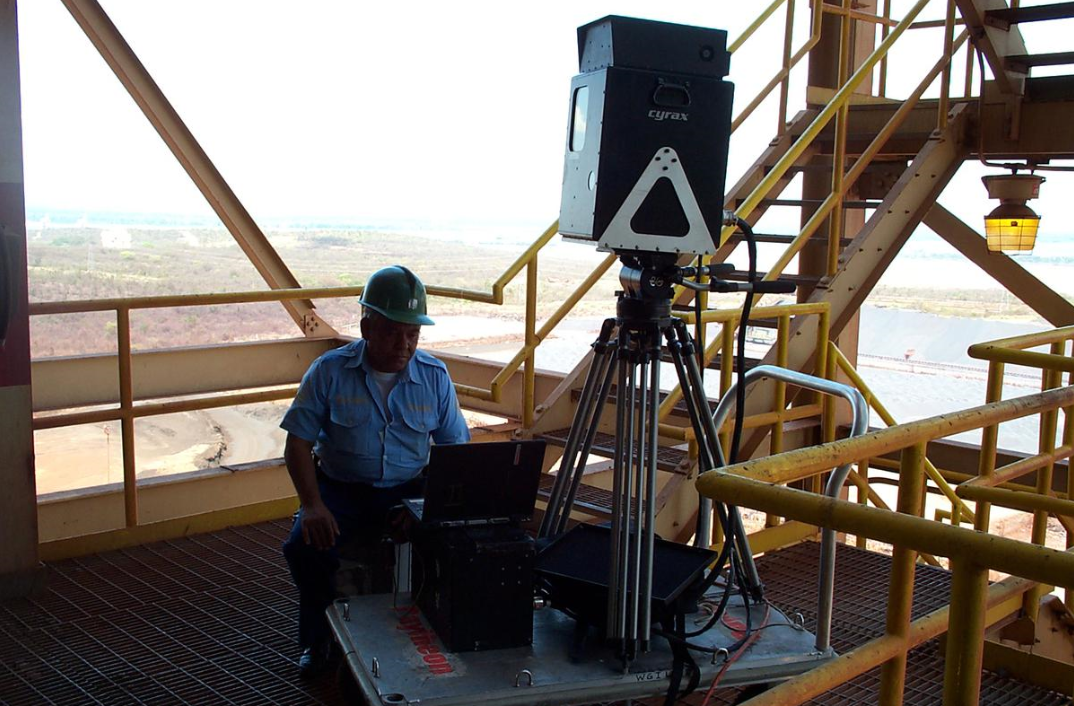 The way Kacyra confidently talked about Cyra’s future growth path, private valuations, etc., helped reassure me that Kacyra was very experienced at this.

Finally, when I went to Cyra for a recruiting visit, I had a chance to meet more employees. I liked them and sensed they would be good teammates. I was feeling increasingly comfortable about taking the risk of joining Cyra.

Before committing to join Cyra, I wanted to get a real sense from a customer about their view of the value of the benefits of this new 3D laser scanning technology weighed against the cost of buying a 3D laser scanning system and executing an as-built project.

Systems cost more than $180,000 and executing field and office work looked to be time consuming. I wanted to know, “Is this stuff really worth buying and using?”

To help answer that question, I wanted to do an in-depth interview with a knowledgeable beta user. Kacyra recommended Greg Lawes with Raytheon Engineers & Constructors.

That lengthy interview with Lawes was pivotal for me. I’m a chemical engineer and I had worked in an engineering department for a large chemical company (Air Products). I was familiar with how rigorous those types of engineering organizations are in evaluating anything and everything.

Lawes went into detail about Raytheon’s evaluation, problems they’d encountered, and how beneficial he believed the technology could and would be. It was clear: Raytheon believed Cyra would work out any remaining kinks and the technology’s benefits were well worth its cost.

At worst, I thought it might be like close-range photogrammetry and Cyra might wind up being an interesting $10 million to $20 million per year business. If that were the case, I was prepared to have fun marketing it and enjoy being in a small company where I could make a difference.

Final steps were a formal offer, deciding on timing, and getting buy-in from my family.

Getting a formal offer was straightforward, however, the timing of joining Cyra was not. Cyra’s systems were still in beta testing. They had not been cleared for general commercial sale. Technically, their scanner and software were still in the final stages of development and testing.

For most of what was then my 20-year career, I had been in product management and product marketing. I regularly interacted with R&D and engineering teams developing new products. Based on my experience, products were almost always late. Sometimes, really late. I did not want to join a company in a marketing role and not have a product that could be sold and delivered.

I would only join after beta systems had been signed off by users and product was ready to go. Kacyra wanted me to join sooner, but my experience said “Wait,” so I waited.

Finally, around February 1998, the betas were all signed off.

Convincing my Family: The Ultimate Demo

One last hurdle: Joining a start-up would mean lots of long hours, so I needed buy-in from my wife and, hopefully, my two sons, ages 16 and 12. I explained that to Kacyra and he understood. He suggested I bring them into Cyra, which had just relocated from Orinda to office/warehouse space near the Oakland, California, airport.

Ben Kacyra and his wife, Barbara, greeted us all on a Saturday afternoon at the office. A few other staff members were also there. I’d told my family about this cool 3D laser scanning stuff, but they hadn’t seen a demo. Then, the Cyra gang pulled off one of the greatest demos ever!

Back then, Cyra was selectively doing demos close-by within the San Francisco Bay Area. Through a connection in the local movie industry, they’d recently 3D laser scanned a large tree and treehouse that had been used in the 1996 Francis Ford Coppola movie “Jack,” featuring Robin Williams. Williams plays a 10-year old boy who ages four times faster than normal, so he looks 40 years old, but acts 10. Our family had seen and enjoyed the movie. 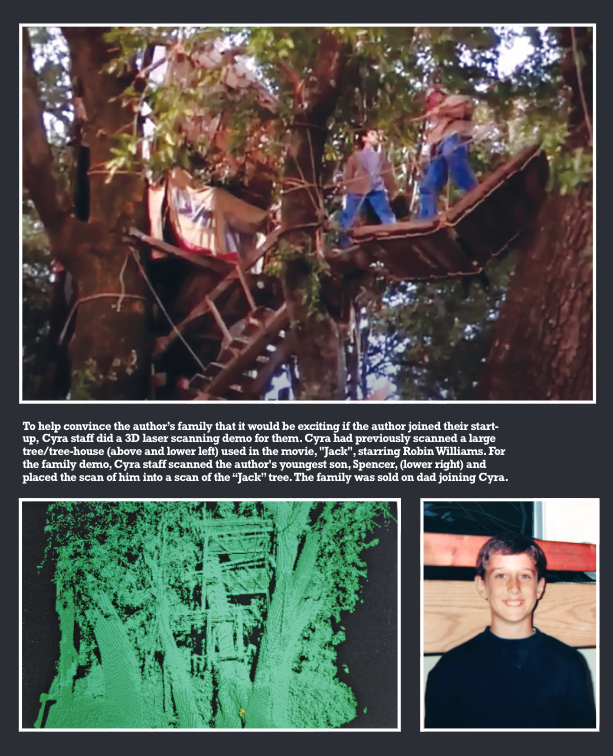 For a demo of the 3D laser scanner for my family’s visit to Cyra, my 12-year-old son, Spencer, was asked to sit still in a chair and allow himself to be 3D laser scanned, which he did.

What Cyra’s Jonathan Kung did next was over-the-top cool. After scanning my son, Kung took the 3D scan data, trimmed it down to just Spencer, and placed it into a 3D laser scan of the “Jack” tree! There was my son, Spencer, sitting in the tree from “Jack. ”That was it. My sons were sold. My wife was sold. I was joining Cyra! I would be employee No. 20.

Shortly after that demo, I gave my two-week notice to Joe Paiva, my new boss at Trimble. Trimble was undergoing a reorganization and Paiva had only been there one week as head of the survey division.

It was weird – I liked Paiva (everyone does) but I was moving on to try this 3D laser scanning start-up. Before leaving, I also spoke with Jim Sorden, my previous boss, who was so supportive of my assessment of the technology and Cyra. Sorden offered his personal view of going forward with Cyra: Invest in Cyra but let them continue to develop the technology. He worried that merging them right away into a larger company would slow them down.

Several Trimble colleagues organized a going away luncheon for me and gave me an engraved plaque, signed by each of them, noting contributions I’d made. That plaque remains one of my dearest possessions.

That day, Cyra staff had just learned about a new 3D laser scanner from a new vendor, KT, in Pittsburgh, Pennsylvania. Cyra’s scanner was a then-blazing 800 points per second, which was groundbreaking compared to total stations that took one or two seconds to measure one point. The scan speed of this new competitive scanner? 100,000 points per second!

My heart sunk. I thought, “What have I done?! I’ve just made a catastrophic career move!”

But, ahhh … not so fast. It was time to take a deep breath, put on my big boy pants, dig in, and see what I and we could do to help make Cyra’s 3D laser scanning systems business a success.

Next in Part 6: Launching Cyra’s 3D laser scanning technology into the market … those first “buckle your seatbelt” days.