Chartered in 1960 during the peak of the space race, this independent, federally funded research and development center serves satellite and missile systems clients. Their government sponsor is the United States Air Force, more specifically the Space and Missile Systems Center (SMC), which includes the GPS directorate (SMC/GP, formerly the GPS Wing). The GPS Directorate is located directly across a busy boulevard from Aerospace Corp at the Los Angeles Air Force Base, connected by a pedestrian bridge.

“What SMC does is acquire space systems for the USAF, and GPS is one of many systems,” says Powell.

By acquisition, I mean SMC writes the Request for Proposals, evaluates the bids, makes sure the components are built to specifications, are tested properly, and are deployed properly, whether it is a satellite or a rocket or a GPS receiver. Does it meet the user’s needs in the field?

We are involved across the board with the business of the SMC. There are other satellite programs, there are launch vehicle programs, ground systems– Aerospace covers the whole portfolio. We work with missile defense, sensors, and target vehicles for the USAF Strategic Command, as well.

Security at the main campus of Aerospace Corp is understandably tight; we were, though, given a tour of the labs. The R&D activities of the labs range from developing, designing, and testing new components to ensure they are “space ready” to analyzing space debris to determine how well components fared in space and re-entry. 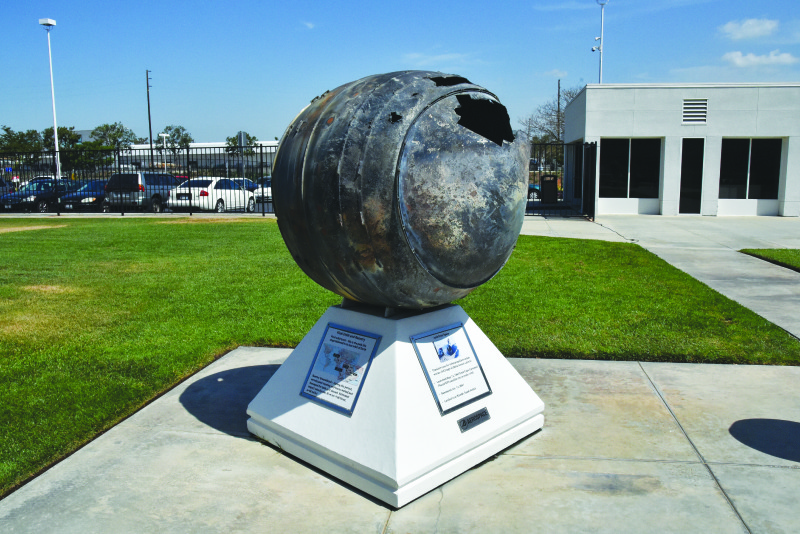 This titanium case for a solid propellant rocket (displayed in the courtyard of Aerospace) was from the third stage of a Delta Rocket that launched a GPS satellite into orbit in 1993 and was recovered in Saudi Arabia in 2001.

One lab has high-vacuum chambers to emulate in-space environments where space-qualified oscillators can be subjected to temperature extremes and radiation effects on oscillators can be simulated. And as timing and atomic clocks are key to navigation systems, several labs are dedicated to research and testing of space-capable atomic clocks. An experiment demonstrated in the lab was of an array of atomic clocks (each smaller than a loaf of bread) in individual vacuum chambers set up to develop synchronization techniques. Recently, an Aerospace team was presented with the conundrum of how to “tune up” an atomic clock, or constellation of clocks, while in orbit (read more here). Aerospace is also working on cold-atom clocks. Dr. Villahermosa, who earned his doctorate in inorganic chemistry at Caltech, showed us the labs where materials science experiments are conducted. Great advances in space-capable materials have come in recent years from 3D printing, with the ability to create new matrices of materials and to seek to eliminate voids. This is a far cry from your home 3D printer; their new million-dollar 3D printer takes ultra-fine metallic dust, heated and dried in a vacuum chamber, and precisely places the dust where a laser melts it into the component.

I was particularly fascinated by the labs that develop small satellites. The boom in small sats and CubeSats have benefited greatly from the pioneering work of the (lucky) scientists and engineers in these labs. Aerospace is a prominent contributor in the development of best practices and standards for small sats. Advances in materials science and the work of other labs at Aerospace are incorporated into these tiny wonders. 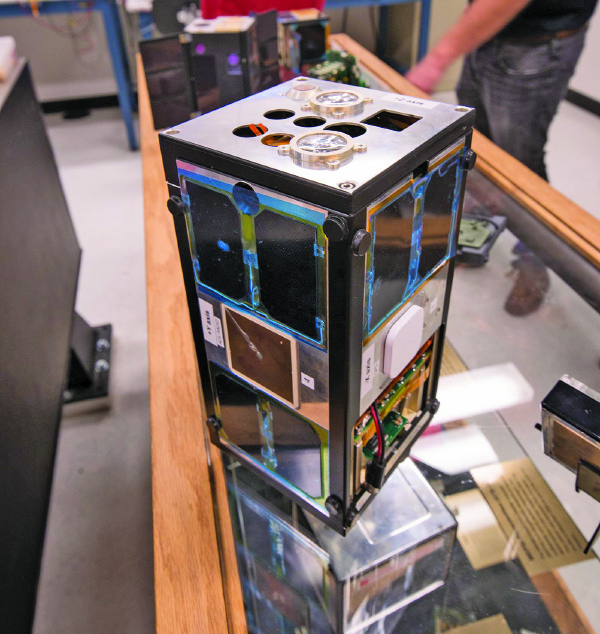 This is one of Aerospace’s CubeSat-like nano satellites, ejected into space by the U.S. Space Shuttle Atlantis on the last Shuttle flight in 2011. Source: The Aerospace Corporation.

I was shown an early small sat that was about the size of a deck of cards and was designed to last only as long as the battery would last, but long enough to test components. One key use for small sats is to test components such as cameras and sensors and to test orientation, navigation and communications capabilities. The launch mechanism for Cubesats, which launches the sat from orbiting “mother ships,” was surprisingly simple: a box with a large spring in the bottom and a release mechanism. Aerospace operates a constellation of small sats in varying numbers and for varying test missions at any given time; there is even a mini-mission control console in the lab. Be still my geek heart.