The origin of global navigation from space has roots going back more than a century. Scientists, authors, and visionaries from Tsiolokowsky, Oberth, Lev, Noordung, and Goddard to Arthur C. Clarke saw navigation as a potential benefit of space vehicles and satellites.

In the 19th century, author and historian Edward Everett Hale’s “Brick Moons” were envisioned as assisting in transoceanic navigation (still a serious challenge at the time). In the 20th century visionaries such as Roger Easton, James Spilker, Ivan Getting, Brad Parkinson, and many more pioneered and lead the development of elements of individual systems that would eventually meld into what we know as modern GPS. By the 1960s quite a bit of development was already under way. “The U.S. Army had the SECOR [sequential correlation ranging] program employing the same exploratory ideas with the Navy’s Timation and TRANSIT [Doppler] systems,” says Ranwa Haddad, principal director in Aerospace’s navigation division.

The USAF had their own needs for satellite navigation and started a program called 621B in about 1964. At that time the president of Aerospace, Dr. Ivan Getting, had the foresight to commission a study; he formed a team of aerospace engineers to look at all of the different options for doing satellite navigation.

There were various schools of thought, explains Haddad.

Do you compute the position of the satellite on the ground? Or do you have a receiver compute it? Do you have a very accurate clock in the receiver, or do you have just a regular crystal oscillator? Do you do 2D or 3D positioning? Do you have a passive signal or an active two-way signal?

And that generates the many different design options. Aerospace studied more than 12 different options, and they came up with a recommendation, and that recommendation was the foundation of GPS. The GPS architecture today is commonly referred to as option 12. That study is known as the Woodford-Nakamura study, or the Woodford study. It was originally classified Secret, then declassified in 1979. [Read the report here] 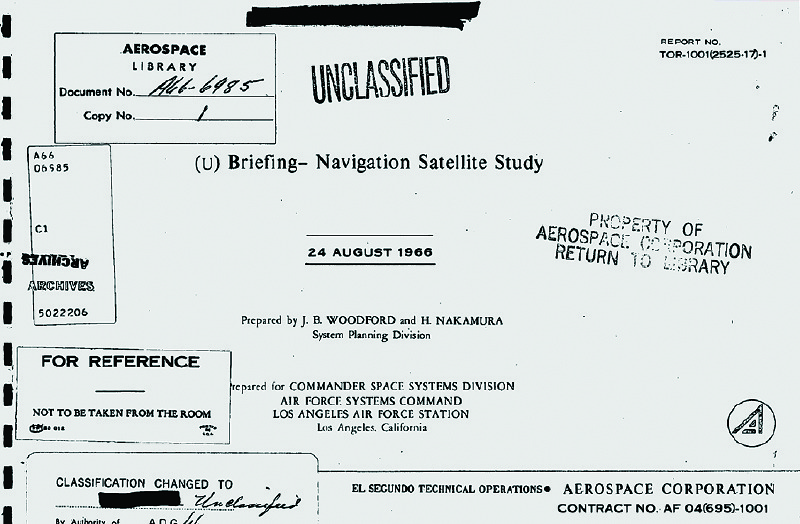 The 1964 Woodford-Nakamura report from Aerospace informed the design of what was to become the GPS system.

“Aerospace played an important foundational role in what came into being as GPS and of course through the guidance of Dr. Parkinson,” notes Haddad. “Dr. Parkinson was the first GPS program manager for the program. He obtained buy-in from all the military services in the DoD in order to get GPS authorized by Congress, funded, and underway. That was no small feat.” Brad Parkinson later served as chair of the Aerospace board of trustees.

As economic security is national security, can end users be assured that GPS is viewed as a critical system for both military and civilian needs? Powell says, “The DoD leadership I’m involved with is committed to reliability for DoD needs and civilian uses. My interaction with these stakeholders is that [GPS] must clearly be preserved for all users.”

This commitment began during the early development of GPS. “I have been fortunate enough to work with Brad Parkinson, the first program director for GPS, and if you’ve ever had the chance to hear him speak publicly about it, he emphasizes very clearly that in his very first dealings with Congress this was to be a dual-use system.

Also, previous commanders of USAF Space Command have held things like civil focus days where they invite civilian stakeholders to come in and demonstrate that they are committed to support GPS as a dual-use system. The PNT advisory board is part of the PNT executive committee; that committee is co-chaired by the deputy secretaries of defense and transportation–a real demonstration of the dual roles of DOD and DOT. The board works to make sure that GPS services are preserved and toughened. They have three objectives–what they call PTA–protect, toughen, and augment.

For more information on Dr. Parkinson’s thoughts about “GPS for Humanity,” see the YouTube channel, stanfordonline. 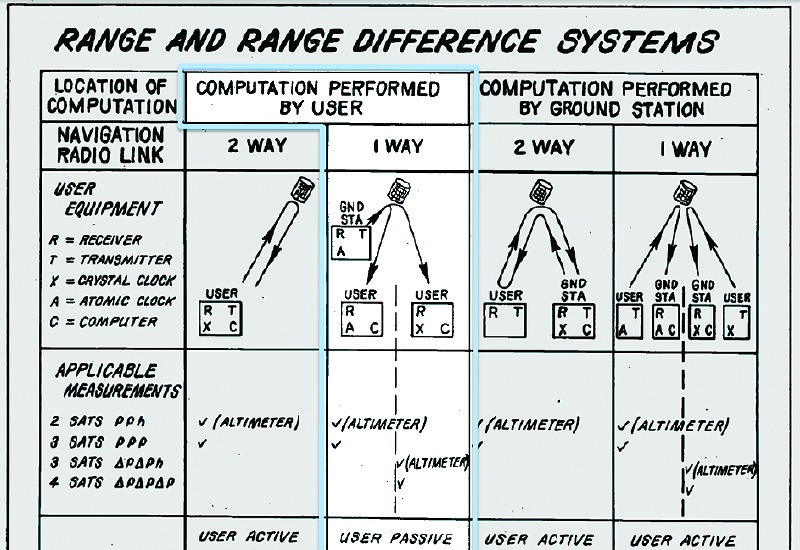 The Woodford-Nakamura was based on a broad investigation of architecture options, with the highlighted one adopted for the design of the GPS system.

“Aerospace Corp’s Role in the Development of GPS” Comments