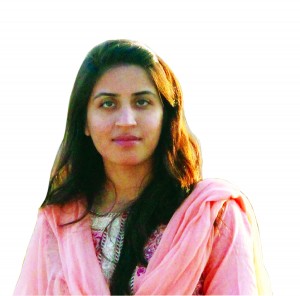 GIS MANAGER IN THE URBAN UNIT PLANNING AND DEVELOPMENT DEPARTMENT

THE POWER AND IMPACT OF GIS and geomatics sciences on the planning, development, human geography, and management of a nation’s built and natural environments are splendidly exemplified by the work and career achievements of Sana Khushi.

Sana earned her two masters (in GIS and geomatics) from the University of the Punjab in Lahore and is pursuing her PhD in geomatics there, as well. Her involvement and leadership in a variety of national initiatives using geospatial data are noteworthy achievements, but so is doing so in a non-traditional role. Sana is widely lauded for expertise, integrity, and tenacity.

As an example of her work, UNICEF used the Urban Unit’s services to develop a geospatial-decision-support system to assess the school education facilities in Punjab Province on the district level; the federal government had asked the provinces to show how they spent their budget on development projects. To develop supporting data, Sana’s tasks included supervision of GNSS and photographic survey teams, supervision of daily data collection and its management in ArcGIS, demarcation of schemas for high-resolution satellite imagery, reporting, and budgeting.

Sana also assisted in the development of the GIS-based elements of an automated wheat procurement system, a land records management in- formation system, and various GIS decision-making themes that support such initiatives as neighborhood crime watches. She’s also involved in a New City initiative that seeks to support ur- ban revitalization and managed growth.