A new “un-GIS” GIS tool enables access, measurement, analysis, and markup capabilities for images – for everyone.

Many years ago, during the era of cinematography and good old-fashioned film, they used to edit movies by cutting the film with a pair of 9-inch scissors; these were called “excalibur.”

This sets the scene for the new imagery application from the GIS industry leaders, Esri. The new app isn’t called “ArcImagery” or “Arc” anything; instead the name is something that shouts out to those imagery experts and specialists who will get it from the outset.

To understand what it is, I sat down for a chat with Jamon Johnson, product manager, and Matthew Calamito, product engineer for the new application, and I’m glad I did because the first words to come from them were something I wasn’t expecting.

“We use the name ‘Excalibur’ to move it away from GIS by not using the ‘Arc’ prefix,” Johnson says.

He quickly explains that the application isn’t really designed for GIS users, although they will be able to access it with ArcGIS 10.7. 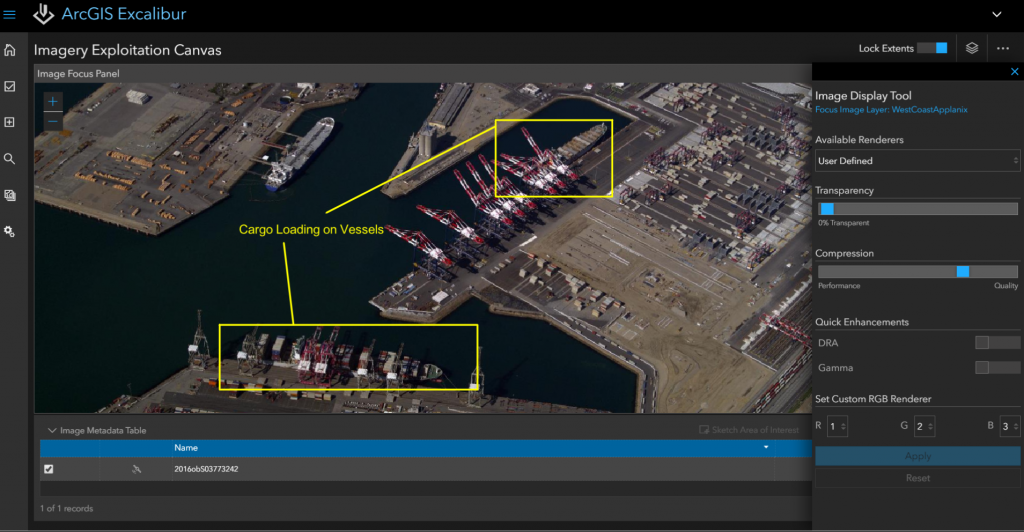 This is where it gets a little confusing and a little bit clever. It is a web app that is accessible from ArcGIS Enterprise and is dedicated to imagery analysis, but in a reverse to what a normal geo person would expect—it puts the imagery first. There’s none of that georeferencing and messing about with points of reference; it actually made me quiet for a few seconds while I took it all in.

Thinking that I’ve had some form of seizure, Matthew jumped in to explain that it was born out of a need for the U.S. defense industry and humanitarian relief agencies to be able to quickly access captured imagery and look at change or draw up features rapidly without the learning curve that GIS requires.

All of a sudden it makes complete sense, as there is little on the market right now that allows you to drag vertical or oblique imagery in and just “get on with it.” Most software of this type is survey-based for converting the data, or it’s specialized analysis in its approach.

The only application I have seen anywhere like this is HOTOSM [Humanitarian Open Street Maps] in that it allows use of aerial imagery and mark-up of features, but it is restricted to the imagery you can use even though it has saved many lives all over the world. My mind’s boggled when I think about what a disaster-relief team could do with this.

Esri was able to share their screens and show me the current build. The first thing they showed was the Imagery Exploitation Canvas–this is centered around imagery projects and provides the ability to view imagery in two panes on the screen, in a split screen.

One side represents the image in “map space” and the other as a “canvas.” Within the map space you could see all the images that were held in that location, all overlaid on one another, then the image to be analyzed or used could be moved into the canvas to be manipulated, measured, or adjusted. 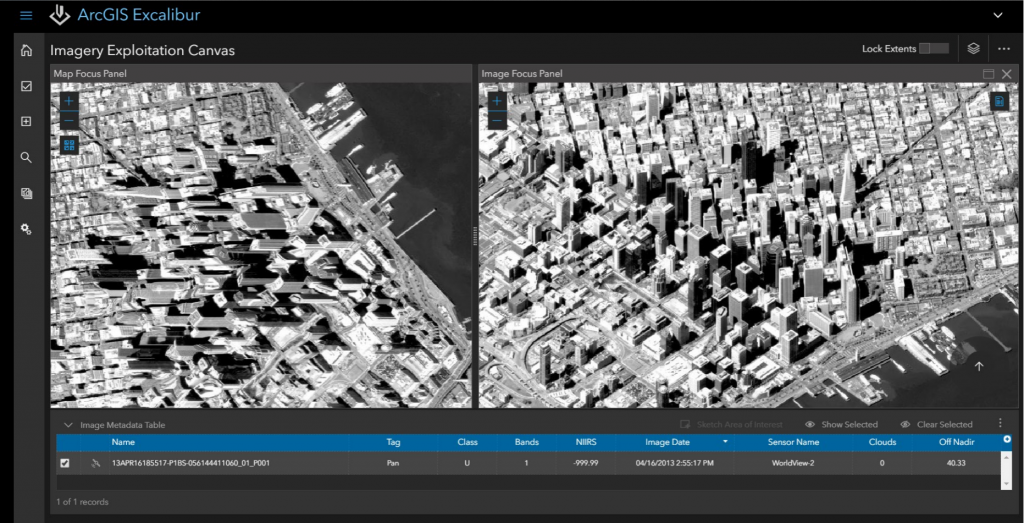 The next interface in the system is called the “Bring GIS to Imagery” and is centred around “imagery projects” whereby each project has an imagery type. Using the canvas, it appeared easy to just draw vector lines, points, and polygons onto the map and then use them in what was termed “contextual layers.”

I was shown points being added and attribution put in, but then when it came to adding information relating the image to the data (timestamps, extent, geometry), it all automatically populated—no time wasted calculating fields or running geoprocessing tools.

With another click of the mouse, I was then seeing a typical dashboard with pie charts and bar graphs.

But amazingly (I am still impressed!), with another click of the mouse, the dashboard was showing statistics based off the data that was just entered. Please keep in mind that there was no fiddling with setting up fields or x axis and y axis information, no attribution manipulation—just a simple click, and the statistics were on the screen. The example I saw showed the amount of features that had been moved. 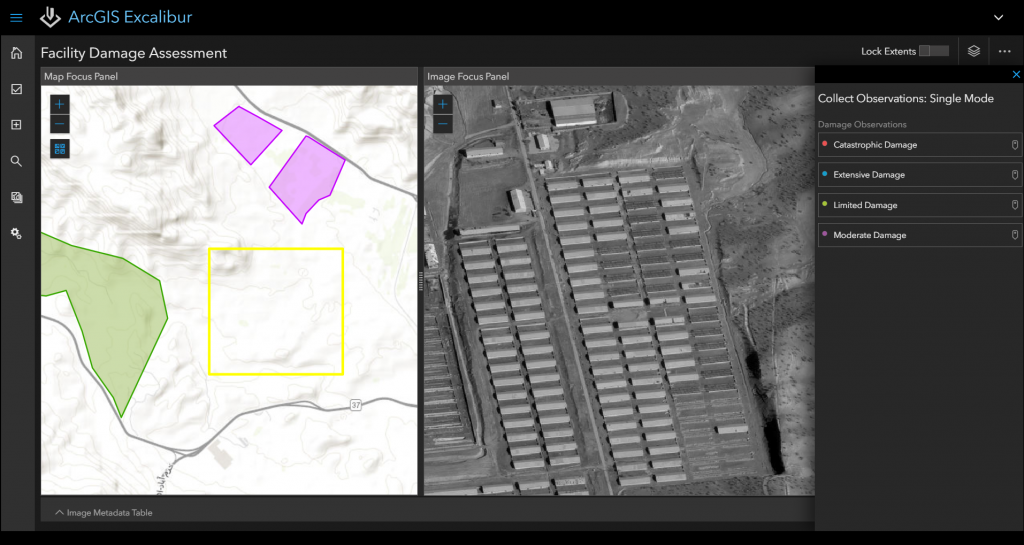 A Tool for Surveyors?

I asked a practicing surveyor (xyHt’s Gavin Schrock, PLS) what uses he and his fellow surveyors might find for Excalibur.

“Surveyors are increasingly using imagery, orthometric and oblique, for project planning. Sure, there are lots of image viewers, and some of the IaaS (images as a service) sites have viewers with rudimentary markup, but to have those capabilities—on images from almost any source—without having to fire up GIS or civil software is going to have quite a bit of appeal”

“In many countries, property/site reports are also done by surveyors, and being able to do the building footprints, roof areas, etc. in what looks to be an easy to use environment online is a big plus. Roofing contractors are using IaaS image services to get roof design dimensions, or climbing up ladders and measuring, or having surveyors do it in some cases. I’d like to do some tests, but this looks like a tool that could provide folks with another viable option.”

“There is always room for new options to be able to interact with clients on project proposals, and with your own survey crews.  I can picture scenarios where a crew can go out to do a pre-survey recon, put the UAS aloft, load some quick aerials into the cloud, and the project surveyor/clients could mark up items to survey while there are still out at the site to start the work.”

“Lots of potential, I think that while there are surveying activities that might not use such things, there will be surveyors and mappers that will love this.”

Jamon and Matthew are quick to tell me that this is only the beginning. Already they are looking at how they can enable AI, machine learning, and animation from drones. There are also new features literally around the corner.

I find this new tool extremely exciting. It is what the GIS world needs: a non-GIS, a step towards the next stage in map-reading and mapping whereby we allow people to use the power of GIS without it being front and center.

Even though I have many of these tools at my fingertips already with GIS, I would no doubt be using Excalibur if I had a choice of tools just purely due to the ease of use and its intuitive nature, the pure simplicity of it.

It’s in its early days, and there are many more of these apps coming out soon, but I will be watching and relating it all as they appear.