With a venue overlooking Westminster Cathedral and a stone’s throw from the Houses of Parliament, Esri couldn’t have picked a more British location for the UK annual conference. Last year (2014), there were a little more than 1,000 delegates; this year Esri UK played host to over 2,000, and it isn’t hard to see why so many traveled from across the UK to be there.

Exhibitors included Ordnance Survey, ODI, Royal Geographic Association, HERE, and Garsdale Design, to name but a few. This was backed up by a full program of over 200 “tracks” (presentations to us normal people) from Esri users from all over the world, some of which I will summarise here.

Royal HaskoningDHV presented on a subject on everyone’s lips at the moment, asset management and their implementation of ISO 55000 for their CASTOR system. A fascinating talk; you can see it here.

Port of Rotterdam (Erwin Rademaker) presented their Esri-based Port Maps asset management system. Being the busiest port in the world, Erwin makes a compelling argument on why they chose Esri software and how they built the system, even to the testing, which involved their own children. You can watch it here.

Steven Eglington of GeoEnable presented on BIM (Business Intelligence Modelling), something extremely relevant now in the UK, as there are government stipulations being put into place for it to be used more. The talk covered what BIM is and how it is implemented, but also the challenges in implementation. You can see it here.

The one presentation that got everyone talking, though, was the technical demonstration towards the end of the opening plenary. The demo was top secret; the staff knew that something special was going on, but except for those working on it, no one knew what was coming…. 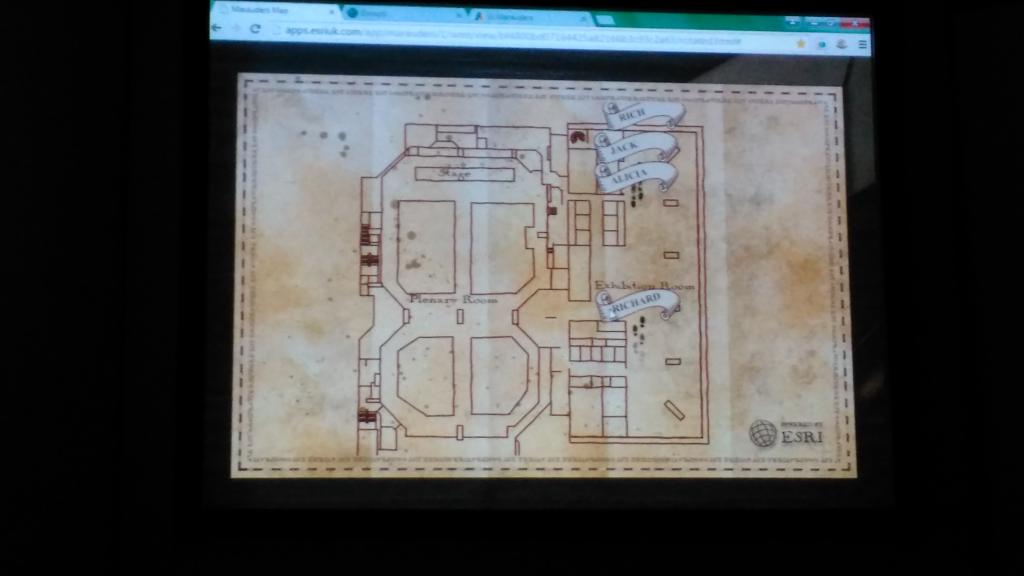 Yes, Esri UK created a “Marauder’s Map.” To those of you who have never read any of J.K. Rowling’s books about a wizard called Harry Potter, the Marauders Map is a McGuffin which allows the reader to view those around them in real time … thus enabling our hero, Harry, to avoid being caught by a teacher.

Apart from being amazingly accurate to the original (in the films), the demo showed the audience how real-time indoor GPS could be used to monitor people.

The team, after wowing everyone with the map, then switched the map to a typical 3D view of the same building, seamlessly showing not only that the markers on the map were relating the real-time positions of the people but also that they could be seen on different levels of the building.

On the surface, what appeared to be a simple reference to Harry Potter turned into a showcase of technology. The team went on to show how the recorded tracks could find better locations for areas of a hospital pharmacy. The demonstration can be seen in full here.

The closing plenary was given by MapAction and, in contrast to the technical wonder of the Marauder’s Map, was sobering. It showed how GIS saves lives every day, from supporting the Nepal crisis by providing quick, accurate mapping, to using off-the-shelf analysis tools to help analyse the spread of Ebola. It brings home how important and relevant GIS and geospatial work is, and no matter what your opinion of the company or the software, Esri are out there investing in saving lives and doing an amazing job of it.