Editor’s Note: GEO Business is an annual conference held annually in London. xyHt’s Europe editor, Nick Duggan has been attending each year, chronicling trends in the geo industry. The event is growing into one of the premier geo events worldwide. 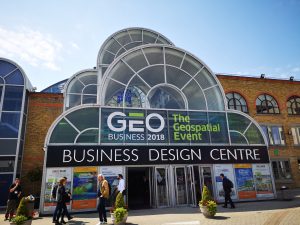 GEO Business 2018 was held at the Business Design Center in Islington, London; the same venue as in prior years.

To those who do not live in the UK, London is a beautiful, thriving city full of amazing history and people with wonky teeth. If you are from the UK, you steer clear of it when the weather gets hot. In the “tube” (the London Underground) the hot air burns your lungs, and having your face stuck in sweaty armpits during peak times is not something anyone wants to endure on a daily basis. But I did it for you, dear readers. In search of the latest and most innovative geospatial tech that the UK has to offer I visited the GEO Business show, held annually at the Business Design Centre in Islington.

GEO Business was held on both the 22nd and 23rd of May this year. It coincided with several other events xyHt normally covers, and it was clear that a few of the exhibitors were a little stretched. On the 22nd GEO Business shared the day with the Esri UK annual conference and VR World. I went to the Esri UK conference in the morning and was surprised to see Blue Sky and Trimble as well as Digital Globe with stands. In speaking with them, they said they were hoping that GEO Business would be quiet as there were near to 3,500 people at the Esri event. On arrival at GEO Business in the afternoon that day it was clear that they had misjudged the popularity of the event, and the show was packed with people. 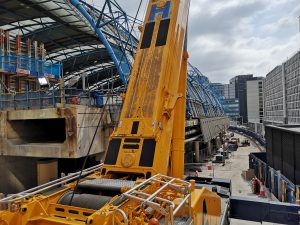 London is representative of the pronounced global infrastructure boom—tower cranes punctuate the city skyline. Appropriately, there was a focus on solutions for AEC to meet the demands of this boom.

The show this year was bigger and had more going on than any human could cope with. There were 68 presentations and 99 workshop sessions in those two days alone. And while the organizers had done their best to avoid conflicts, it was very difficult when you had Verisk, Geomares, Topcon AND GetMapping all presenting at the same time in different theaters on subjects you wanted to hear about. How do you choose between the utilities seminars and the railways & tunneling seminars? And isn’t there crossover? Either way, the few sessions I could attend were very good and well written, given by companies that excel in their fields, with presenters open to questions afterwards. The environment lent itself to feeling quite open and easy which made for a less “classroom” environment and a more approachable feel than some events. 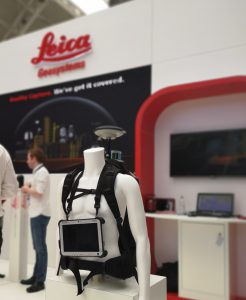 Leica Geosystems featured their mobile asset mapping system.The theme for the 23rd of May was “Geospatial: Powering the Fourth Industrial Revolution” and there was a strategic conference led by Simon Navin, Ordnance Surveys Smart Practice programme manager. What interested me was the concept that geospatial is such an influence in so many areas of our lives that it is rapidly becoming known as the key driver and enabler of this fourth industrial revolution.

Multiple “theaters” hosted simultaneous presentations. Here, Rollo Rigby of the Severn Partnership presents on the integration of new tech. Severn is a prominent geomatics firm, in the UK and globally, known for their leadership in the adoption of new tech and innovation in services and solutions. Several of Severn’s projects have been featured in xyHt.

Who’s on the Scene

As for the exhibition, all the usual suspects were present: Leica, Topcon, & Trimble took center stage, and within arms’ reach were their resellers and partners. But there were some unexpected stands from companies like the UK Coal Authority, the Land Registry, and the UK Military Geography Squadron.

There was a strong UAV and drone presence, but it was counterbalanced with a good amount of hydrographic survey and a few companies with inshore hydrographic solutions, such as Swathe Services and Seafloor Systems. Likewise, there was a big BIM presence, but this was counterbalanced by a geospatial and GIS presence with the likes of Bentley and Gaia 3D across from stands from the BIM Alliance. All in all, there was everything you’d possibly need, from equipment rentals to the professional bodies.

GEO Business keeps growing each year, expanding to the upper floors of the venue. Despite being held at the same time as some related events the same week in the UK, GEO Business was bigger than ever. 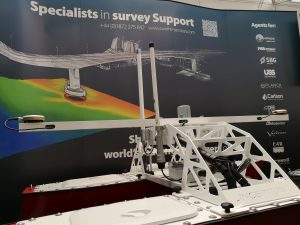 2018 showed an increase in exhibits of solutions for hydrographic surveying and particularly for inshore hydro, like Swathe’s updated systems.

There were a few notable highlight stands. For starters (no pun intended), the “Startup section” had stands from new companies. Two who stood out were Hägring, a Swedish AR company (Borkstrom Robotics) with clients in the construction sector and Spherevision, an open format 3D camera software. I could have spent all day chatting with these two companies alone. Both startups acknowledged that they weren’t necessarily doing anything new, but they had refreshed the technology and thought about all the things that were currently wrong with what was available on the market—and fixed it. I hope we will be covering these in a future issue.

It was clear that a few of the better-known companies were holding information back; from talking with GeoSLAM I could tell there was “something” afoot that they said would be released nearer to the SPAR or InterGEO conferences, Likewise, Leica seemed to be holding back on any RealCity and CityMapper announcements at this time, and BlueSky were up to something but not letting on … Never fear, xyHt is watching them closely. 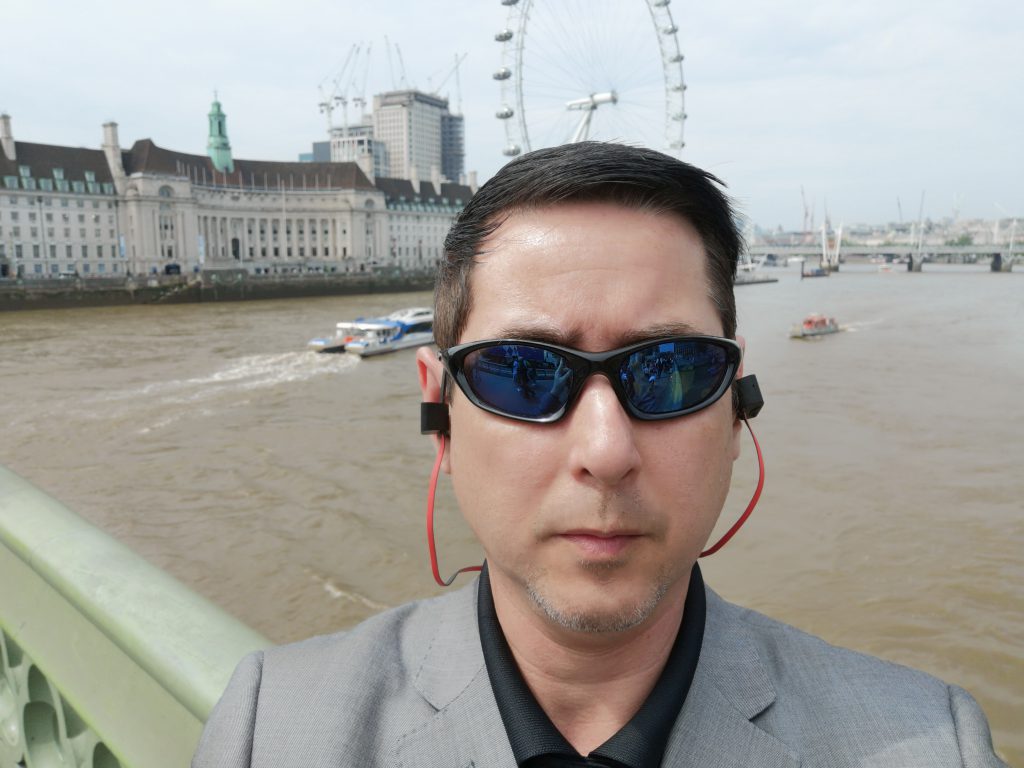 xyHt’s intrepid Europe editor, Nick Duggan, braved the heat and bustle of London to bring you the trends and highlights of this annual event. We trust he enjoyed a good pint and a pie before heading home on the train.