On May 21 and 22, I attended the GEO Business conference in hot sunny London to bring you the latest developments in survey, BIM, and GIS. The conference had a lot in it, from the latest in drone technology, amazing augmented reality, and the recent developments in collaboration among GIS, CAD, and BIM, including the concept of digital twins.

There was quite a display of fancy drone hardware, although unfortunately no demonstrations within the London Design Centre! There was also a good selection of applications on display, including a service that enables you to create a fly-through of your local area, with your plans (buildings, housing estate, whatever it might be) superimposed on top. You provide your CAD files and a fly-through route, and they capture the current state with a drone and superimpose it on top your plans.

One area that fascinates me is the potential for collaboration between the areas of survey/CAD and GIS. There has always been so much potential, but this has been limited by incompatible file formats, processes, and approaches to recording and sharing spatial information.

The recent development and implementation of BIM (building information modeling) has opened up this potential for sharing data. This was a recurring theme at GEO Business, in both the talks during the strategic conference and in discussion with those exhibiting there. Clients want to get more from the data collected for them, and they are looking to use this data across the whole building cycle—including maintenance, refurbishment, and decommissioning—rather than just in the design and build phases.

The potential for collaboration is amazing, but often this is limited by problems of sharing data between different organizations, which has always been a major stumbling block. Rob Klaschka (principal consultant at EvrBilt Limited) discussed this issue in his presentation in the BIM seminar. He said that, while the development of BIM and surrounding procedures will help with this exchange of data and information, there is still much work to be done.

Currently it is common for the survey element of a project to be outsourced to a survey company (good for us!), but then the outputs of the survey are often provided as a report or a text-based digital version rather than a full digital model. The integration of BIM allows a flow of data through the whole design, build, and operation process, which would be much more useful to the client. 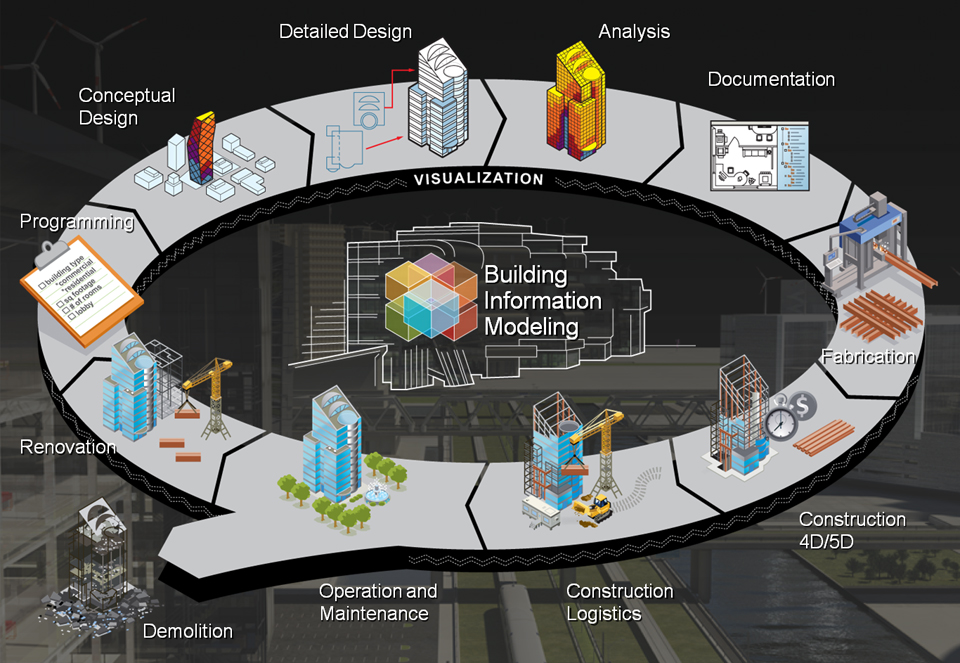 Both the client and us in the survey industry need to take this on board and look at ways of providing full digital models that are useful the to the client in the future.

One of the big concepts also discussed was a digital twin. This is the idea that, for any product (car, building, transport system, house, etc.) a purely digital copy of it is available for designers (and users) to consult and use to maintain the physical object they are responsible for.

This concept is not new; it was first developed by NASA during the Apollo missions. They called it “mirroring” and had a duplicate of everything that was sent into space, which helped them troubleshoot and assist astronauts in space from the ground. Their copies were usually physical, but the same principle applies with a digital copy.

Tesla uses this approach to have a digital twin of every model of car they produce; this allows them to know what configuration of model and extras any one customer has and to identify and troubleshoot errors before they occur.

A good quality BIM would operate in the same way, and information on materials used would be useful in a range of applications, including refurbishment and disaster management.

A timely example of this is the major fire in Grenfell Tower, London in 2017. A recently applied external cladding resulted in what should have been a minor, containable fire spreading to the whole block of flats and resulting in 70 deaths. If the details of the cladding had been available to the fire brigade and those managing the evacuation, most likely more deaths could have been avoided.

William Priest, chair of the UK’s Geospatial Commission, gave a short presentation on the current progress the commission has made in the 13 months since it was launched. One of the key elements he pulled out was that of the geospatial digital thread, much like the BIM golden thread that links data throughout a building’s whole life cycle.

One of the particular planned outcomes for the next year of the Geospatial Commission is the development of an underground asset register. This is planned to be a dataset containing the location of all underground infrastructure, with the aim of reducing the current cost of utilities striking other companies’ underground assets while they’re installing or maintaining their own assets. This is currently estimated at £0.5 – £1bn (~.63 – 1.27bn USD) per year and is regularly highlighted by industry as an issue.

GeoBusiness is an amazing conference, and I recommend it to anyone who works anywhere in the geospatial or survey industries. This year the conference conflicted with Esri’s annual UK conference (also in London), but next year there will be a GeoSpatial week, with Esri’s conference on May 19 and GeoBusiness on May 20 and 21. Definitely make a date to visit them, and it’d be great to meet