Wow! Just, wow [ed. Translation to US-English “Wow!!”]. Last week I was at the UK Esri annual conference with 3000+ people crammed into the tight QEII conference centre. This still didn’t prepare me for GeoBusiness this year. It was the same venue as last year but somehow they’ve crammed in a few more stands, and it was BUSY!!

Here are some stats:

From the moment I got there at 9am until I got thrown out at about 4:30pm, I didn’t stop—as soon as one conversation finished, another began—such a great mix of Chartered Survey, Chartered Geography, Geomatics, GIS, Engineering covering all areas of geospatial work, it was hard not to be impressed. 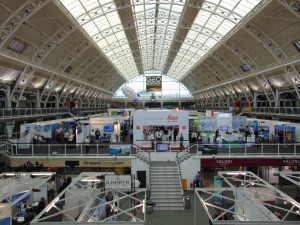 GeoBusiness 2016 was held May 24th-25th at the Business Design Center – Islington, London

One of the first companies I met was my old friends, Ordnance Survey. The headline, “The most accurate and up-to-date geographic data now available for the first time in new application suitable for BIM projects” blazened across the page in front of me.

For a while I’ve been in contact with Ordnance Survey and have been told many times that there was no interest in 3D (even though I’d worked on some in my employ there), so it was a bit of a shock to hear that OS had been working with Cadline behind the scenes to produce a great new tool for Infraworks, called OS Model Builder.

Using the OS Model Builder you can rapidly create 2D and 3D building or infrastructure models which are BIM ready.

Gary McDonald, OS strategic relationship manager, said: “OS listened to feedback from the building industry and the result is Model Builder, a leap forward in bringing our world-class data under one roof and removing previous license hassles. We are also aware that when you are dealing with multi-million pound projects and making important decisions, you don’t want the risk of relying on inferior and inaccurate geographic data. You want the best and most current picture to work from.” 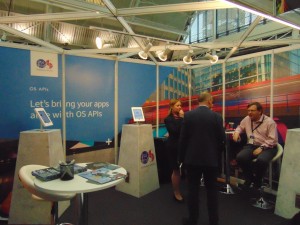 Ordnance Survey of the UK booth

Next up I met with Avenza, a leading developer of cartographic software, such as MAPublisher and Geographic Imager tools for [Adobe] Photoshop. As we chatted about how cartography is changing, I hear that their mobile app has had over 1 MILLION downloads. Let’s just think about that: there are either a lot of kids thinking that this is a cool game or there are people out there actually using maps, Avenza maps to be more precise.

Avenza says that unlike other map apps that provide one view of a location using GPS coordinates, Avenza’s PDF maps app provides a meaningful interface to measure distances, drop placemarks, and share personal recorded data in various formats for use on land, sea, or air. PDF maps is an award-winning, all encompassing solution for the use, distribution, and sale of digital versions of paper maps to mobile devices.

My personal opinion is that it is a great app to use when travelling abroad, as the maps can be accessed and used offline, removing the worry on international trips of that “International roaming” charge!

In other news, I noted that Mapublisher 9.7 was also announced with WMS now available to be managed, geopackage format now supported, and the help system has been moved online.

Avenza have been extremely busy these last 12 months!

I’m walking away from the talk with Avenza and I can’t help but be drawn towards a HUGE interactive table; this thing has to be 60 inches if not bigger and the images on it are crisp. It is even harder not to believe that the city which I am moving around is an 3D model. It is so cool—it has shadows, real-time sun position, atmospheric density, and that is before I point out that this is accurate to 15cm over the 130 square kilometres of London; it is expanding at a rate of 5-8 square kilometres a MONTH! 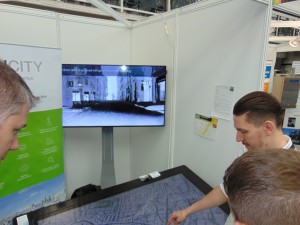 Sandor Petroczi, product manager of Vertex Modelling, said: “Using a combination of photogrammetry, high-res aerial imagery, and a highly skilled workforce, we are able to create our 3D model of London that can be used by any entity involved in design and planning of the city. We do not use any automated processes, and although this is more expensive and time consuming, it allows us to create highly usable models with a consistent level of accuracy across the dataset. The team is currently capturing Camden and Southwark while updating existing areas from the latest 2015 imagery. VUCITY is an ideal solution for visualising the entire dataset.”

I’ve got to admit that I am very impressed, but part of me is a little unsure about their claim to be the “first ever interactive 3D model of London” purely because I’ve seen a few 3D interactive models of London, one from CartoConsult, a company based in Swindon, and also Garsdale Design (yes the one I work for!). Although our model wasn’t served as a webGL to be interactive, it still won an Esri award, and I would suggest that it is a little better than 15cm, more like 4-8cm.

Walking away from VUCITY feeling very confused, I feel my phone buzz and I check my Twitter …. and it’s Charlie Whyman from 3D Laser Mapping, asking if I’d been to their stand and if I’d been REALLY impressed if I had.

Not one to shy away from a challenge I rock up, ready to rubbish such claims … but firstly Charlie is a girl and secondly their kit is pretty cool. Now, I don’t want that previous statement to come across as sexist; what I mean by it is that you come across a lot of men when you talk survey kit—A LOT of men—so having spoken on the internet with Charlie a bit, I had already put an image in my head, but no, not hairy, not wearing a hard hat, not even a pair of wellies …. 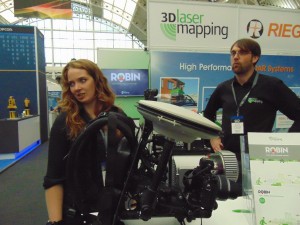 ANYHOW, on display was a backpack-type laser scanning system named ROBIN, about 8-10kg in weight and mobile enough to wear for a couple of hours at a time. I’m told that the portable battery pack would last you 3 hrs (but is expandable). So that I can get an idea of HOW portable it is, I ask my human guinea pig, Tim Hughes, to put it on and see how it feels. Apart from looking like an extra from the Ghostbusters movies, it is extremely comfy and also it has a field of view of 330° and an 18MP camera. Best of all? It is designed for outdoor and INDOOR capture, yes INDOOR (why I’m saying that in capitals, I don’t know).

At this moment, the ROBIN is waiting for the SLAM upgrade, which should be happening a little later in the year.

Mark Hudson of Geoterra said, “Geoterra is very excited about the launch of the new ROBIN multiplatform mapping system. It’s become evident that there’s a gap in the sector for this kind of product, and we’re sure it’ll prove to be an extremely popular addition to the marketplace.” 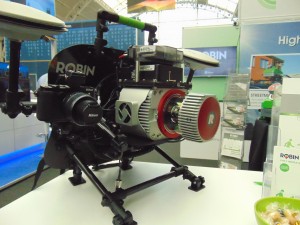 So, to understand how the accuracy of the SLAM unit works (for indoor mapping) I went over to GeoSLAM to see if they’d talk. About all I got was a surveyor telling me how clever this device is and that it records your start point to high accuracy (typically 3cm but 1cm has been reported). Once your position (indoors) is known, it then uses your route (provided you complete a circuit) to fully map the internals. I asked questions about how it knows scale, units of measure, speed, etc. but was quickly faced with a blank face and the term, “Really clever algorithms” – me thinks it is the beginning of a GREAT article for a future issue!

As I said above, having been wowed by the ROBIN system, I went over to GeoSLAM to find out more about how the SLAM works, but what I didn’t say was they had a huge screen up behind themselves showing the rather clean and crisp scan they had made of the exhibition center. Any doubts I had were quickly extinguished; the indoor detail looked really good, with a 100hz sensor and capture of 43,200 points per second, I’m not surprised.

The model I was being shown was the ZEB-REVO, a handheld laser scanner which automatically revolves compared to ZEB1 which was, errr. …”interesting” to use.  An unrelated demo video of the ZEB-REVO in action can be watched here. 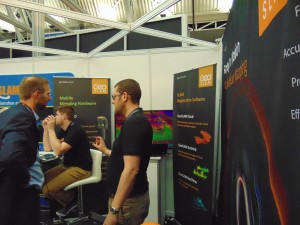 GeoSLAM’s booth – their ZEB-REVO handheld scanner-mapping system was out and about on the exhibition floor on demo duty.

Graham Hunter, managing director of GeoSLAM, said, “The ZEB-REVO fulfills a new niche in the market for ultra mobile indoor mapping solutions. Our early adopters have been thoroughly impressed with the ease of operation, vastly reduced scan time, and accuracy of the resultant point cloud, all from surveying just 1 closed loop. It won’t be long until the ZEB-REVO is the ‘go-to’ standard in the surveyor’s toolkit”

Just around the corner from GEOSlam, I bumped into a Ben McEwen from Seeable, also Severn Partnership. I couldn’t help be be drawn into talking about the VR Occulus Rift on the table. Severn Partnership are a survey company; they have some great pieces of kit. Their main man, Rollo, was showing me over their road kit (mounted on a truck), and it is impressive—they are all chartered surveyors and know their stuff. All except for Ben: there was all this amazing 3D vector buildings (also in VR) and Ben was telling me how easy it was. Here is the real story: Ben is from a GAMING background, he is used to modelling games and adding real physics using the unreal engine … no wonder the models looked so good, but it goes to show that sometimes we are too hung up on the detail and the accuracy. When we are looking at a visualisation, how important is it that it is 1cm-5cm accurate when you can emulate real world physics? Watch this space. 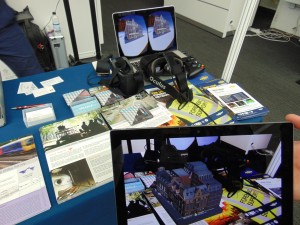 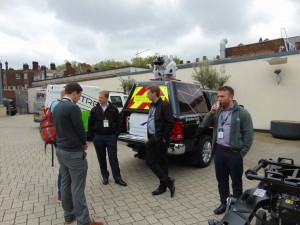 A couple of booths up from Severn Partnerships was the BGS. What I wasn’t expecting to see was a 3D mouse set on the desk. Why? BGS are now providing 3D geology data for almost all of the UK. How cool is that? Okay, so it is high level—you can obtain 1:10000 scale 3D data for a cost but for many cases—this is great news.

I bumped into these guys while gawping at a video of some mesh (point cloud) data being converted in one simple step into a vector polygon: no tricks, no messing with triangles, just a point and click conversion. Although currently (here in the UK) we are only able to access version 1.2, look out for version 2.0 which takes things to a whole new level! 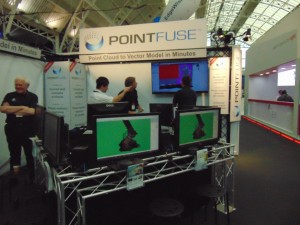 There were so many other great companies there—Leica, Trimble, Topcon and others—but I see that I am already running close to 2000 words. In my opinion, the big conversation was 3D: everyone was selling it (albeit in different formats), and also good old-fashioned surveying but using the new tools to make it more accurate and usable than ever before.

What a great event—let’s do it again next year!! 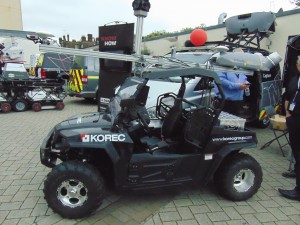 Korec Group brought their mobile mapping buggy sporting a Trimble MX2 system. Parked behind that is a van with a Trimble MX8. 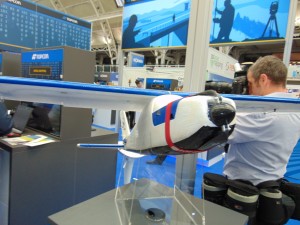 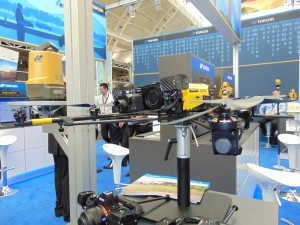