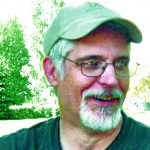 An Interview with Gary Sherman

If Roger Tomlinson is considered the father of GIS, then Gary Sherman is one of the godfathers. He started building a GIS to solve a particular problem, and it has since grown into the world’s most-popular free GIS: QGIS.

Gary doesn’t often give interviews, so when he agreed to do one for xyHt, I couldn’t help but jump at the chance, and he didn’t disappoint.

ND: You studied mining and mineral engineering as well as geology. How did you get into GIS?

GS: Well, geologists and mining types love maps. My love of mapping goes back to my early days, tromping the wilds of Alaska with a compass and paper map in hand, triangulating off mountain peaks to determine if I was lost, or better yet, where I was.

Early on in my career (early 1980s), we were using custom software on an old Wang 2200 computer to plot mineral resource maps. We eventually moved to a Wang VS and continued to use the same custom software. A copy of PC ARC/INFO was acquired in the late 1980s, but I didn’t really do much with GIS until a job transfer where I could get my hands on “real” ARC/INFO running on a Solaris workstation. From that point we migrated our workflows to use GIS but really didn’t do much analysis.

ND: How did you create QGIS? Was it a solo effort or did you all meet down at the pub and start coding?

GS: QGIS started out as a solo effort in February 2002, driven primarily by my after-hours desire to view PostGIS data on my Linux box. In my day job, I was working on displaying small-tract survey data stored in descriptive XML files. This was a Windows project, and I chose the cross-platform Qt framework to provide the GUI since I was familiar with it from my personal projects. I decided I could do the same at home for PostGIS data on my Linux box, so I started from scratch and began coding up a viewer. So, it really began as a hobby project, using C++ and Qt.

After I had a primordial working version, I hosted it on Sourceforge and posted to a couple of sites about it, looking for contributors. The first “release” was in July of 2002 and was pretty primitive—able to display PostGIS data but do little else. There was some interest in the project, but it built slowly.

I was on my own until the first code contribution came in October [2002]. A year after the project started, we had a grand total of three developers. Once the project really gained traction, things began to grow (code, features, and contributors) rapidly. Within four years we had over 20 developers in addition to people contributing code, documentation, graphics, and fixes. I can’t stress this enough: QGIS wouldn’t be what it is today without all the dedicated people involved.

ND: Aside from what QGIS is now, what did you set it out to be?

GS: As I said, my primary motivation was to produce a viewer for PostGIS data on Linux. With that in mind, I did choose a cross-platform framework to leave open the ability to compile for other operating systems.

I didn’t have grandiose dreams of creating a full-fledged GIS. Ultimately, I hoped to be able to view a number of vector and raster formats with a nice legend and some basic map tools. Obviously, QGIS is way beyond that now, with a good suite of analysis tools and a huge number of plugins.

ND: What were the challenges in creating an open source GIS?

GS: After I announced the project on a few sites/mailing lists, some in the open source geospatial community questioned why I was starting a new project rather than contributing to an existing one. There was actually a bit of opposition to the project, but I had done enough research to know that none of the existing projects provided what I was after. This situation didn’t last, and at least one of those opposed ended up ultimately contributing to QGIS.

There were, of course, technical challenges, particularly when we moved to support on-the-fly projection. That took quite a bit of work to sort out and get working properly, as did getting the first Windows version to compile.

Had we sat down and developed a road map for QGIS as it is today, I think we would’ve had more trouble along the way. Instead, using the “release early, release often” philosophy as espoused by Eric Raymond’s collection of essays [“Cathedral and the Bazaar: Musings on Linux and Open Source by an Accidental Revolutionary”] allowed us to develop more efficiently by rapidly incorporating feedback and bug fixes.

ND: You are still known within the geospatial community as “the founder” of QGIS, and in 2014 you won a Sol Katz award for geospatial free and open source software. Yet, you don’t seem to publicize this or have any public involvement with QGIS anymore. Is there a reason for this?

GS: I’ve never been much of a self-promoter, but seriously, the cliché “life happens” applies here. In 2012 my wife was diagnosed with cancer, and I assumed the role of caregiver. I found myself unable to devote the time to the project it deserved and so passed the torch on to others.

I still regularly compile the latest development version and use QGIS in some of my other endeavors. I actually contributed a couple of commits to the release of 3.0 and am still a lifetime “honorary member” of the QGIS board.

ND: You currently run Locate Press which has become the go-to place for reading material for open source manuals and information. How did that come about?

GS: Locate Press was founded by Tyler Mitchell in 2012. The first book was an update of The Geospatial Desktop, the original, previously published by another imprint. Tyler moved on to other endeavors, and I acquired the company in 2013. Since then we’ve published 13 additional titles, with several more underway for release this year, including an update to the immensely popular QGIS Map Design by Anita Graser and Gretchen Peterson.

ND: What are your plans for the future?

GS: Well, I’m hoping to work myself into full retirement in the next year or two (I’m probably older than you think) and do a bit of traveling. Otherwise, I have no big “geospatial” plans.

ND: Many of our readers are from a survey, aerial imagery, or construction background and are looking at QGIS for their future projects. Do you have any advice for them?

GS: I would say, give QGIS a go. Browse through the many plugins available, as you may find one that addresses your particular need. For example, Kartoza (kartoza.com) has recently released a parcel plugin for capturing coordinate geometry from survey diagrams. In addition to the core capabilities of QGIS, there are a lot of contributed plugins that meet the needs of various disciplines

[Editor’s note: we’d considered the title “Godfather of GIS” or “Godfather of QGIS”, as what Gary did, like a “godfather” (in the traditional sense of the word), was to take GIS community by the hand and show it that open source, and especially an open source platform (he developed) would definitely be a part of its future.]