More than partners, Esri and Microsoft collaborate and combine platforms to benefit their users and the public.

From their CEOs, Jack Dangermond and Satya Nadella, down to the individual developers and field sellers, Esri and Microsoft work together very closely.

“We are connected at almost every level to each other’s companies,” says Lea Ann Thurman, Microsoft’s global alliance manager. 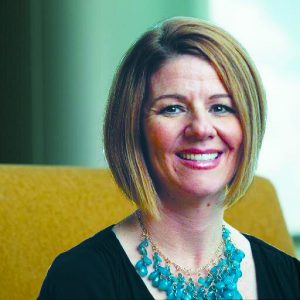 Both Esri and Microsoft have much invested in this alliance.

“There are dozens of resources on both sides that are focused on making sure that we are connected,” says Heather Blatchford, Esri’s director of global strategic alliances. “We spend a lot of time at each other’s headquarters.”

Thurman has spent her whole career in high tech. “I started hanging around Microsoft on my college breaks, being a temp,” she recalls, “and I have been here for 15 years.” After a short interruption to work for one of the company’s partners that was starting a Microsoft practice, she returned to Microsoft when Nadella took over as its CEO. Her role is to work with independent software companies.

“Esri is one of three partners I manage today,” she says. 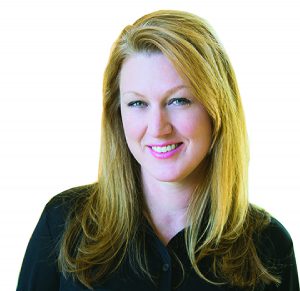 Blatchford has been with Esri for seven years and worked at Microsoft for the previous five years managing its relationship with Esri. In particular, she worked on Esri’s adoption of Microsoft’s Azure platform, which Esri began considering about 11 years ago.

In addition to Thurman, Microsoft’s team that works with Esri includes a senior software development engineer and a partner marketing expert. “I have watched this partnership grow from afar over the years, and today I have the privilege of being the steward of this relationship,” she says.

Thurman has been in her current role for about five years, which is about as long as Blatchford had the role when she worked at Microsoft. Together, they have “a big collective depth of knowledge and passion to get these two organizations to work seamlessly together,” says Thurman.

The relationship between the two companies began more than 20 years ago.

“Esri is very good at looking at new tech and determining how it will best serve our customers within our platform offers and then incorporating the best of what these partners, like Microsoft, have to offer,” Blatchford says.

“Jack talks about the depth and lasting nature of this relationship,” says Thurman, referring to Dangermond. “He’s been very consistent in his interactions and work with Microsoft and our leadership over the years, ranging from our technical enablement projects to customer opportunities to joint projects that are good for society as a whole.”

“We have a rather aggressive approach with our AI, and our relationship with partners such as Esri will help us with additional capabilities that will differentiate us in the market,” Thurman says.

“Esri has always been a cutting-edge adopter of Microsoft technology—from Azure, AI, SQL, SQL Azure, PowerBI, Office, Windows, you name it—and we are thankful for that,” she says. “In fact, they were one of the earliest adopters of Azure, 11 years ago.”

Today, Esri has many products built on Microsoft technology, including ArcGIS Enterprise that runs on Azure. Esri is “a huge consumer of SQL Azure,” says Thurman, and was an early adopter of AI, SharePoint Online, and several other Microsoft products. Microsoft’s sellers now receive incentives to sell with the company’s independent software partners to capture cloud business. 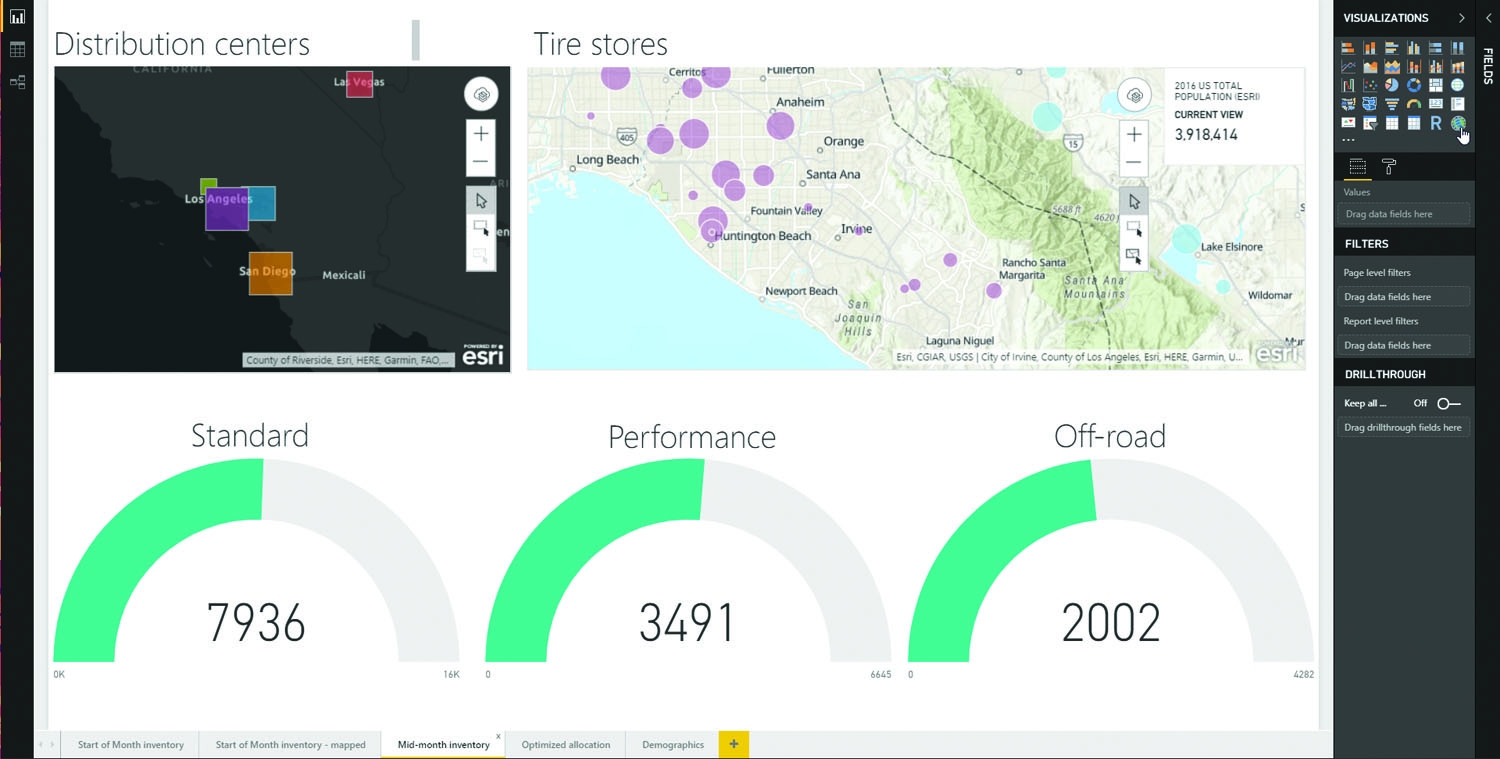 An analysis of tire distribution centers in ArcGIS Maps for Power BI.

Customers procure Azure from Microsoft or from a Microsoft reseller and they get Esri technology from Esri. They can have Esri’s professional services team combine the two products, have a system integrator partner do it, or deploy it themselves from Microsoft’s Azure marketplace.

“Most of our enterprise customers have Azure agreements with Microsoft, and the value is being able to take their Esri products, for which they are already licensed, and fully deploy them in the cloud or in a hybrid scenario on premises and in the cloud,” says Thurman.

Some Esri products, such as ArcGIS Online that is an SaaS product, are the exception. Customers do not even know on what cloud it is running because Esri takes care of purchasing Microsoft licenses and cloud space. Some of Esri’s customers run the software on a Windows system on-premise; others leverage Microsoft’s SQL Server as their geodatabase.

“As Azure has become more and more prevalent in the market, cloud platforms have become more acceptable,” says Blatchford.

“Every time an ArcGIS Online customer creates a map, that feature service information is stored in SQL Azure,” says Blatchford. 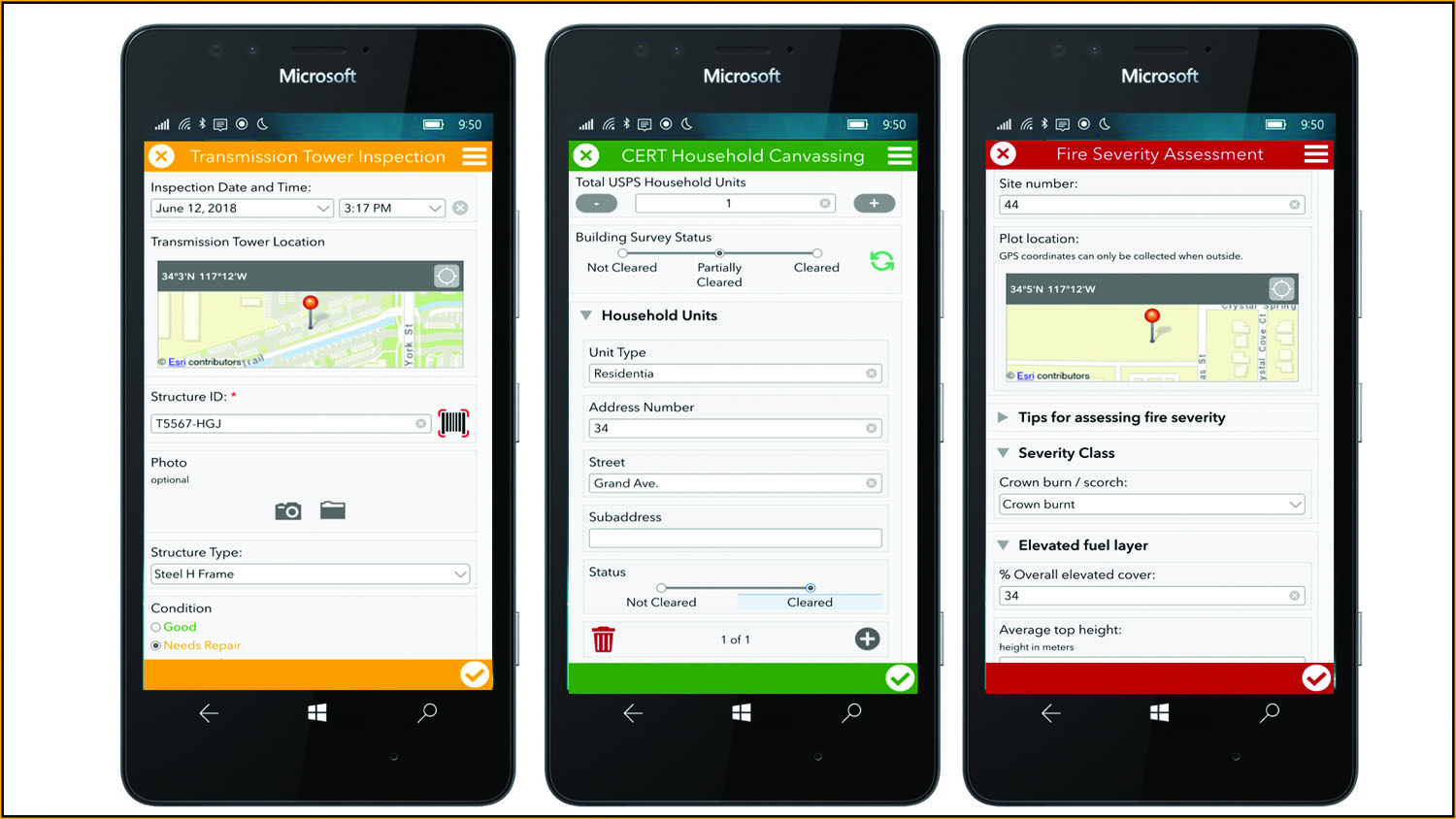 Esri, which has long integrated with Microsoft’s Office and SharePoint, now provides ArcGIS Maps for Microsoft’s PowerBI, introducing millions of Microsoft subscribers “to the power of maps and geospatial and what that can do for their business,” says Blatchford, citing customer segmentation, marketing targets, and financial risk as use examples. “We are excited about the project with the PowerBI team as it continues to introduce more mapping technology and spatial analytics to an audience that Esri had not previously been engaged with directly.”

“We have a very close working relationship with the Microsoft development team and the partner team,” says Blatchford, “to make sure that Esri has all the information that we need to develop our road maps in a timely manner in order to take advantage of the Microsoft tech.”

Esri, she points out, is the only partner product embedded in PowerBI, as opposed to integrated with it.

“We partnered with that team and put ArcGIS Pro on an Azure virtual machine and stitched in some AI and machine learning to make things more intelligent,” Blatchford explains. “We then shared that with a select group of nonprofits that were chosen by the Esri and the Microsoft teams as grant recipients.”

In March 2018 at the Esri Developer Summit, Sirosh gave a keynote, and Microsoft made DSVM available on the Azure Marketplace for anyone to access using their Azure credits provided that they have purchased an Esri license.

Microsoft has “a rather strong AI strategy,” says Thurman. “We are weaving it into our core products. Our AI platform is about enabling every developer to infuse intelligence into their existing apps, in any language and on any OS. It brings best-of-cloud to AI developers and best-of-AI to cloud developers.” 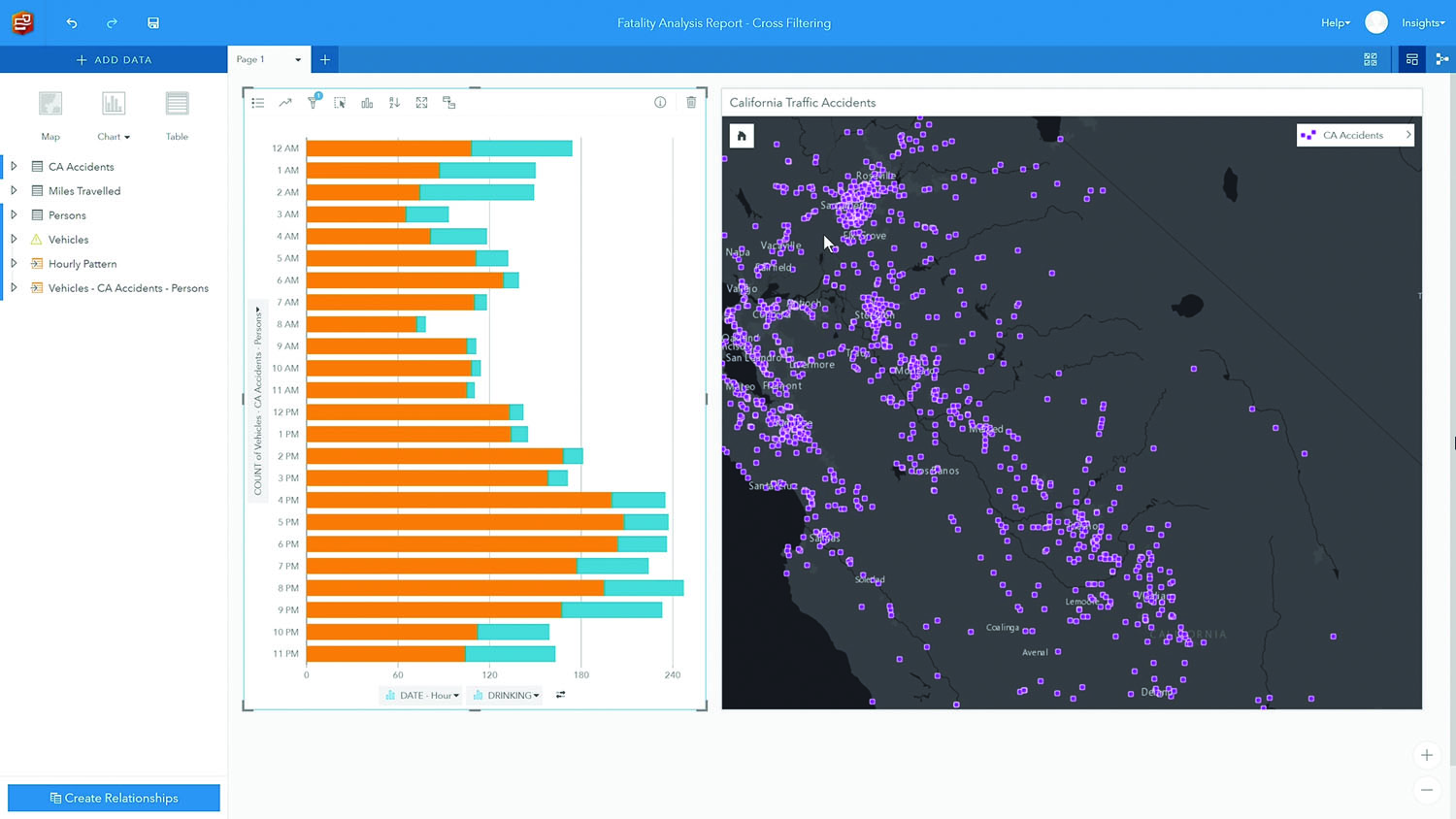 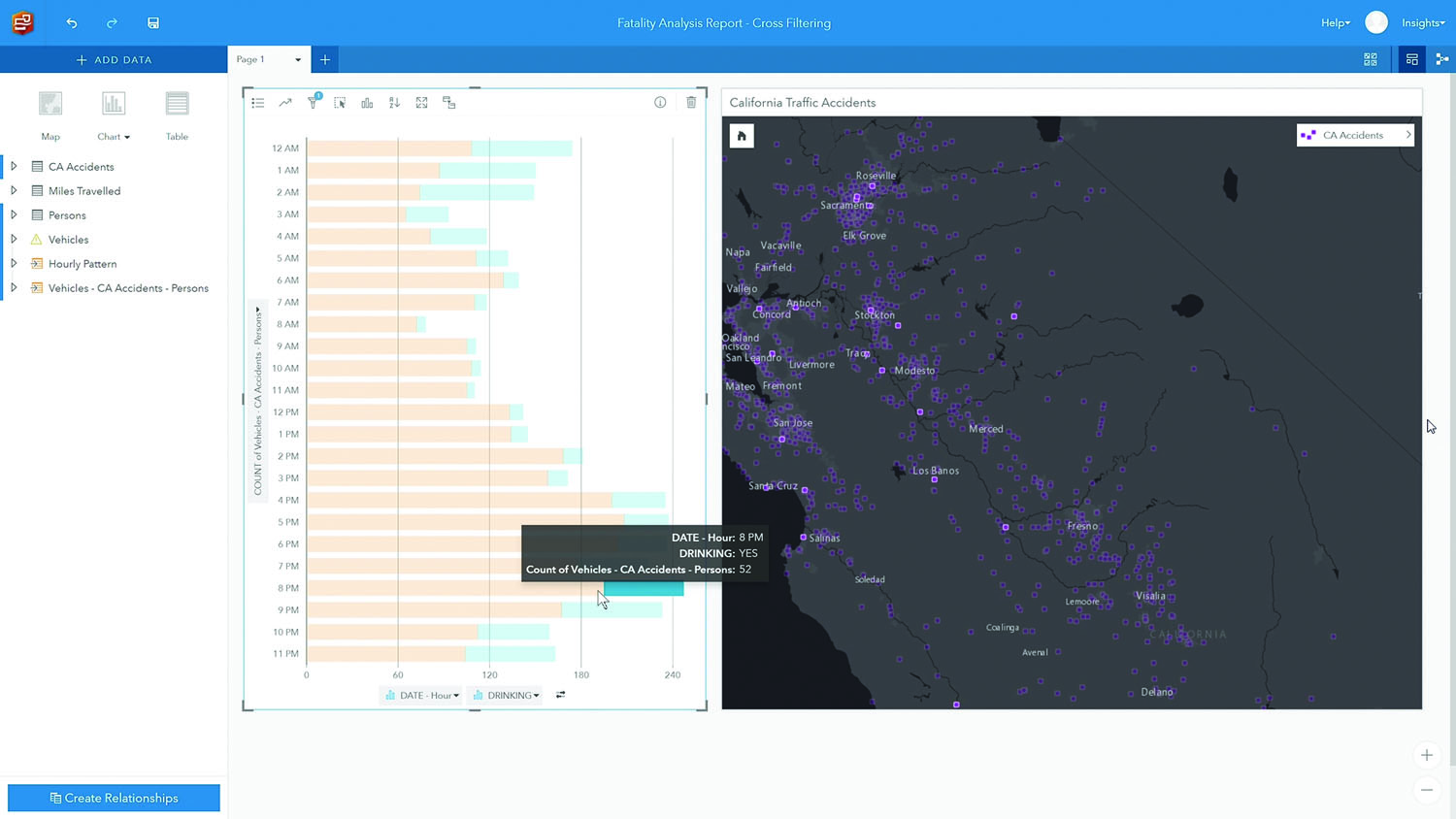 Both Esri and Microsoft partner with TomTom and HERE. Esri provides geocoding capabilities and base maps to the two companies, which, in turn, provide content to the Esri platform. HERE provides the base map and geocoding that powers Microsoft’s Bing Maps, and last year TomTom announced that it was putting all its services on Azure.

“Microsoft is one of our most strategic relationships,” says Blatchford. “All elements of our platform are now available on Azure.”

ArcGIS Enterprise can run directly on Azure or on a virtual machine; Desktop Pro runs on Azure as a DaaS; ArcGIS Online is an SaaS that leverages Azure as a platform-as-a-service; GeoEvent and GeoAnalytics (Esri’s new technology for IOT real-time data monitoring and big-data analytics), as well as Esri’s new Insights product (a geospatial BI component to ArcGIS Enterprise), run on Azure.

“As of eight months ago, we are now in a position where Esri fully runs on Azure,” says Blatchford.

“Ninety percent of enterprise data can be geo-tagged, and we believe that we can help Esri capture that market together and educate our customers who don’t have Esri to take advantage of this partnership,” says Thurman.